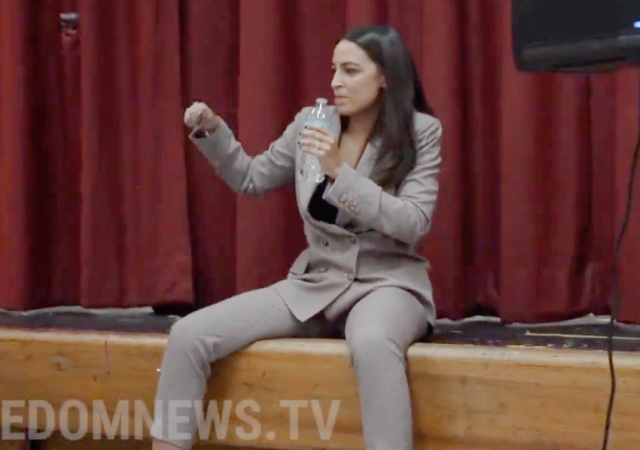 Protesters confronted Rep. Alexandria Ocasio-Cortez (D-NY) at a town hall in her district the other night. How did she respond?

Dancing. She danced as they shouted, “AOC has got to go!”

. @AOC wrecked again – her own constituents keep putting her on blast

At one point, the lawmaker appeared to spot a sign in the crowd reading, “Wake up New York. Vote for Tina Forte. F–k AOC.”

AOC later tried to reason with the angry demonstrators and get them to quiet down and engage in a conversation.

Her plea didn’t work, as a female protester then began hurling obscene remarks at the congresswoman.

As if things couldn’t get any worse for the Democrat, the lights in the auditorium went out and Ocasio-Cortez had to be escorted off the stage. When the lights came back on after about a minute, AOC joked, “I’m not allowed to be in a room with the lights turned off.”

AOC is running for a third term, which she will likely win in November since her district is deep blue.

She’s mocking her constituents because she’s never lived in her district, they didn’t put her in power, and she doesn’t answer to them. https://t.co/uiIhcbNNpJ

Imagine if Democrats like AOC realized they were the employees of the people in their districts and not above them… https://t.co/nXlcEtCRHq

New York City is a shithole and when AOC's constituents complain to her about it at a townhall, she dances like a slow child instead of addressing their concerns. 🤡

This is hilarious – AOC creates mob – mob turns on AOC. Everyone is sick of this fraud. https://t.co/H0YLXh4iDJ

AOC's district saw 57% increase in major crimes, she can mock her constituents because she doesn’t live in the district, she definitely doesn’t believe she has to answer to them or need their vote .. pic.twitter.com/AYrKtROUlh

So someone is heckling Sandy from the Heights. That means they want to date her.. She’s in a safe district.

They should be mocked. The lemmings will voter her back into office no matter how much she insults them. Is there no cure for democrat stupidity?

Most likely as even costing her district 25,000 jobs a la Amazon or something like that they put her in again. Her act is wearing thin, however. Sooner or later you actually have to do something and I can’t point to one thing she has done other than Instagram videos of how amazed she is at a garbage disposal.

This is a member of Congress. I wish Mencken were alive to witness this s-show.

You missed the part where she suddenly started yelling ‘LISTEN, LISTEN, OHKAY!’ in the most racist, fake, ‘angry Latina woman’ voice imaginable.

She’s a stupid, immature child that has gotten this far solely on her looks and the fact that the press has never dared question her mindlessly spewed talking points. for one second.

It’s overly generous to call that “dancing”. In any case, it’s yet another sign (as if we needed it) that AOC and her worshipers are not serious people. Their pose of intellectual superiority becomes more ludicrous with each passing day.

This is AOC’s true barrista self on full public display

Full? That’s just the tip of the iceberg.

Congressman Cortez could mock her constituents because she knows they come in leftist, far leftist, and extreme far leftist and there is nothing she could do to lose her district and whoever tries to primary her will be as out of touch and won’t bother to do homework.

The end of her being a rock star is positive because reality is important but don’t look too far into this.

“I’m not allowed to be in a room with the lights turned off.”
With her history of panic attacks, they can’t even let her watch Scooby-Doo.

if you skip the audio and watch her body language only the message is clear–she is taunting her constituents–“i’m in power and you’re not !”–“don’t care what you have to say–don’t even have to listen to you”–my fervent belief is that in nyc, regardless what district she lives in / represents, she’s going to piss off the wrong new yorker

That’s one interpretation. Another is an acknowledgement from AOV that she knows from personal experience in doing the same thing that chanting simplistic slogans is nothing more than low-rent political activism for the brain-dead, which is good to get you maybe a little dance, but that’s it.

She could disimbowl kittens on that stage, and still be reelected. She has that office for as long as she wants it.

She could probably skin a bear and get away with it.

Nah, Kari Lake could skin a bear. AOC would think it was trying to date her.

she should have just flashed her boobs. at least would have been entertaining.

“Flashed her boobs”. H’mm. With the latest firmware update?

Hey Sandy! The ’60s called and want their hand jive back!

I can’t even begin to feel sorry for those folks. They voted for that retard. They’ll reelect her as well for as long as she wants the office., They have only themselves to blame. All I can really hope for is that they don’t get the things they really want, for that would be even more destructive than we’ve seen with Pedo Joe.

These are such dumb takes when they show up. You really think the people protesting her voted for her???

Yeah .actually, I do. Mindless chants are a left thing. You don’t see conservatives chanting cheap slogans at school board meetings — instead, they’re delivering actual speeches with actual ideas in them.

the lights in the auditorium went out and Ocasio-Cortez had to be escorted off the stage.

And even that totally unplanned unfortunate accidental break didn’t save her from her constituents.

Wonder how much her handlers had to tip the manager to pull that breaker?

So You Think You Can Represent?

“I love you, AOC. Look at the big brain on AOC. AOC is my favorite big brain Latina.”

I’m surprised someone else hasn’t pointed out the most surprising thing here. Several commented that she doesn’t live in her district. I’ve not heard that before and sure enough, The Constitution says only that they should live in the State they are elected from. When the Repubs take the House they should immediately pass a bill requiring members of the House live in the districts they are representing.