Has The Democrat Dam Holding Back The Red Wave Finally Broken?

Has The Democrat Dam Holding Back The Red Wave Finally Broken?

It’s more than the polling. You can just feel it. Biden is flailing, selling off the strategic petroleum reserve in a desperate last minute attempt to lower gas prices. He can sense it, and the Team Obama running him can sense it. 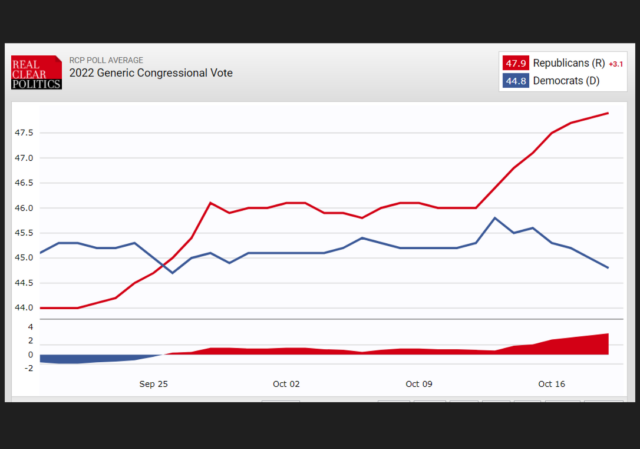 Can you feel it?

The Democrat media eeyores certainly have, as I pointed out two days ago, Democrat Media Ramps Up Operation Demoralize – Against Democrat Midterm Hopes.

No one, other than Nancy Pelosi after downing a few, is predicting Democrats will hold the House. The Senate is tougher because each race is so specific, but the generic polling on which party you will vote for (the framing of the question sometimes varies) depicts a rising Republican tide.

The Real Clear Politics average of polls for the generic congressional ballot (featured image) shows a Republican breakout. Almost every recent poll not only shows a Republican lead, but given historical undercounting of Republican voters, the lead is likely higher.

The movement in specific districts is towards Republicans.

🚨 POLITICO: Ten races out of 12 are moving toward Republicans

Key Senate races Democrats were expected to hold have tightened and the momentum is towards the Republican.

Even assuming Democrats hold Arizona, it is likely (certainly not definite) that Republicans also retake the Senate. 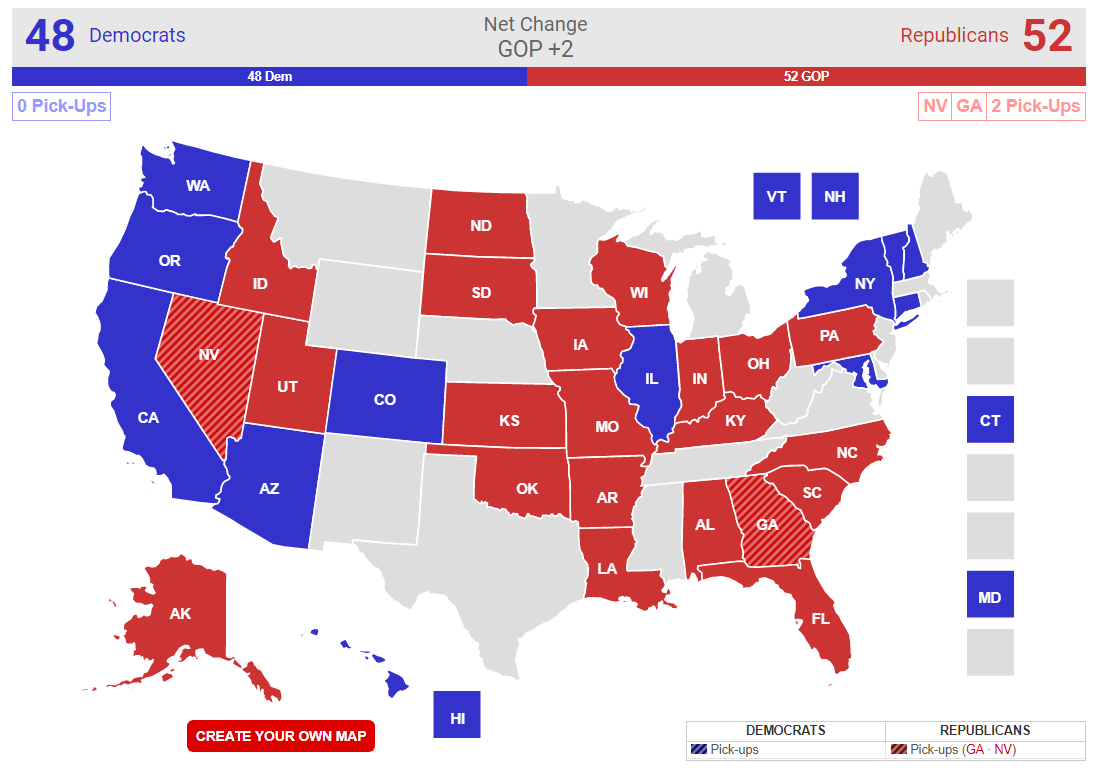 There is absolutely no guarantee of a red wave. *Anything* can happen. But when Democrats are scrambling to defend deep blue territory like New York, and Oregon, and Washington State, you know it’s real.

Not that it necessarily *will* repeat the pattern, but as Kornacki noted, this "late shift" to Republicans is building harder and faster than it did in 2014.

It’s more than the polling. You can just feel it. Biden is flailing, selling off the strategic petroleum reserve in a desperate last minute attempt to lower gas prices. He can sense it, and the Team Obama running him can sense it.

Michigan 10th district win means John James finally takes a victory after some losses just trying to get into a seat.

Some good news on the Israeli side (no articles to put this into yet so here ya go).
A wanted terrorist who murdered an Israeli female soldier at a checkpoint 10 days ago tried attacking another checkpoint. This time not very successfully.

Every cycle, about this time, the polls stop shaping the election and start to aim for something more accurate to buffer their reputation. That’s all this is.

True but it’s much more profound this time. They really blew it. I don’t know how they recoup from this. Not by themselves. That’s what the Stupid Party is for.

Some do, anyways, not all. Quinnipiac will be 5 to 15 points off in every race always towards the Democrat. They just can’t help themselves. In recent years the best pollster is Trafalgar.

But seriously, folks, I’m wondering if the accelerating video snippets of No-Apologies-MAGA candidates like Keri Lake and Ron DeSantis butchering network meat puppets into individually-wrapped chilled quarters while-you-watch isn’t impressing voters into remembering and longing for the America That Used to Work.

It’s just hard to tell how many true swing voters there are.

My whole life I’ve never seen anything with a D next to it worth voting for, so while I like to keep an open mind and don’t register as R, I don’t think I would be considered part of a swing vote.

Honestly? There aren’t really any actual ‘swing’ voters, as in people that haven’t actually made up their minds about what they want.

What there are, are a whole lot of utterly ignorant and disconnected voters that simply don’t care enough to pay attention until right before the election.

But they aren’t actual ‘swing’ voters. They have their own set preferences that aren’t changing.

Its also why Democrat ballot harvesting is so successful, because there are so many people that simply don’t care and can easily be bribed or coerced into ‘voting’ with no actual idea what they are voting FOR.

Swing voters do exist. They are mostly suburban women who get most of their news from TV. However, swing turnout is far bigger than swing voters. Most people know where they stand, and the only question is whether they are motivated enough to vote. That is why Democrat ballot harvesting in big cities is so successful. A lot of their voters aren’t motivated enough to actually take the trouble to vote, but when an harvester shows up and offers them cash or cigarettes, they suddenly get motivated.

They must have, and I recently explained half my evidence on the fact that she is a former leans-left Democrat.
She used my phone number for some state D candidate a few years ago and I am getting alarming texts from James Carville and Adam Schiff.
This tells me the depth of the alarm but the breadhth of their concern is so great they will text inactive contacts.
It reeks of desperation.

My spouse is on business travel to WA state, within an hour she got one call and two texts from the Murray campaign (she has an East Coast phone #). You would never get calls from her campaign, as it was generally a lock as soon as she filed.

Oddly enough I am getting “panicked” emails from all the Republican candidates, and I do mean all of them. My junk email folder has 50 or 60 “please send me money or the dems will win” pleas every damned morning.

My political spam has plumb dried up the last few weeks. I’m not seeing R panic at all

Standard political fund-raising nonsense. They know that after the election donations will dry up so they’re determined to milk the cow for as much as possible before it wanders off. That’s what the junk folder is for.

20 years ago I was a swing vote, I am not today, it will be a cold day in hell before I vote for any Dem, I have thought repeatedly that they could not become worse, only to be proved wrong.

The Damn Democrats Have Broken everything they touch. They are morally corrupt. Wash them away with a red wave in Nov.

And again in 24 and 26. It will take a while to wash away the grime.
To accomplish this we will need to do the real work of returning freedom to the USA.

Many are now full fledged Communists.

Pollsters need those last few polls before an election to be inside the ballpark, so they can claim they weren’t just pushing their own political agenda with biased polls all year long.

This is why the Democrats push for early voting; they want to get people to vote before they see the reality of the polls (many vote for the perceived winner).

EXACTLY! It is only now when people start to pay attention to the election, and they are also starting to notice how whatever they use to heat their homes has gone through the roof, and how the price of everything, from Halloween candy to, coming soon, Christmas presents, have gone through the roof and are still rising.

They can hide it with illegally drawing on the SPR, but the Diesel reserves and production are low, and EVERYTHING moves by Diesel fuel. The price increases are either embedded in what we get, or we don’t get it at all.

Thanks a lot, Brandon, you unmitigated fool.

It is funny that they demonized us to the point most don’t participate in in polls, and now they can’t get a good idea of how many are going to vote until it is too late. We are winning because we do not vote based on the perceived winner, that is how Trump was elected. They were saying Hillary was going to win, just what we needed, having a killer as president. I would like to know what the FBI and DOJ know about all those suicides.

Or the reality of how bad the Democrats are as the campaign goes into its final stretch. That is why they want early voting before any debates are held, and why Trump’s biggest blunder in 2020 was his refusal to do the 2nd (virtual) debate with Dementia Joe. Too many suburbanites were voting by mail already, and many hadn’t heard of Biden’s family’s corruption yet.

Foolish people! The pre-printed democrat “ballot” are boxed and ready to be delivered after the polls close. The machinery has been in place since Obama “won”, both times and was cemented by SCOTUS when they refused to hear WI or GA in 2020. I will vote Republican on November 8th but the Republic is lost.

Well, there is some precedent….

To paraphrase Jaws the d/prog are gonna need a bigger box of ‘late’ ballots to overcome the momentum this cycle.

I hear you. But the red wave may be enough to overcome the Dems margin of vote fraud and rigging. Their election ‘fortification’ machine is most effective in large urban areas they completely control. It doesn’t work as well in areas they do not have complete control over the electoral process and can’t use Zuck Bucks to finance their ‘ballot harvesting’.

They aren’t “pre-printed”. They are harvested, and then filled out by activists. That is why drop boxes are so useful for them, and most are sold to harvesters and filled out at the last minute.

Went to see Greg Gutfeld in deep blue Connecticut, and there were thousands of people in line to get in, took us over an hour just to enter the facility. Crazy, never seen anything like it.

Winter is coming for House Pelosi. I look forward to watching the election returns with a cold adult beverage as the track from “Victory at Sea” thunders in the background.

Her ambassadorship is already reserved. Pelosi will be fine.

Put her with her ice-cream, then bury it.

Whatever ‘red wave’ hits will be due to a rejection of the Jacobin Dems. It will be not an embrace of the GOP by the voters.

McConnell and McCarthy will more than likely squander the opportunity given them. Just as the GOPe always does.

What will play out after the ‘red wave’ is an internal struggle for control within the GOP, between GOPe and MAGA. And the GOPe is perfectly willing to give control back to the Dems if they don’t get their way. As they did when struggling for control with the Tea Party and with Trump after he was elected.

I will be pleased to see the Dems removed from legislative power. But I won’t get too excited until I see what the GOP they actually does with the power the voters give them. 2024 is the election that will decide who controls the GOP — MAGA or the Dem-adjacent GOPe dinosaurs.

The only way to fix the Uniparty is through the primaries. Make them lose their jobs. One be one. It’s going to take time.