The Independents only care about inflation. Remember, it’s the economy, stupid. 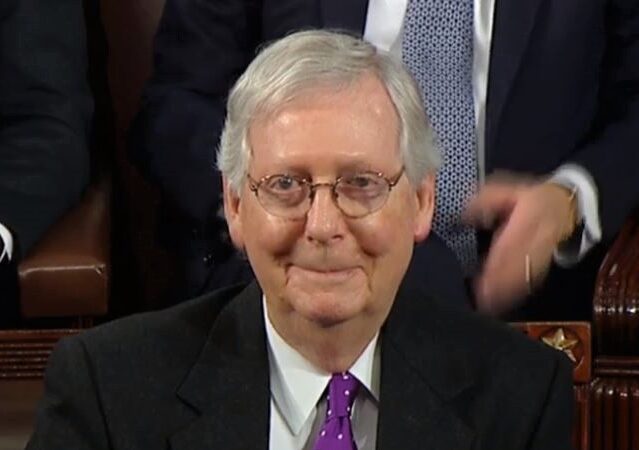 A CNBC All-America Economic Survey showed the GOP leads the Democrats by two points in a generic poll but crushes them regarding economic issues.

48% of the respondents prefer the Republicans to control Congress, while 46% choose the Democrats.

The Republicans destroy the Democrats on critical issues, though.

What are the main concerns of us plebes? Jobs, security, paychecks, and providing for our families.

Inflation is the top concern among Americans, but mostly Republicans. Democrats’ first concern is “threats to democracy,” while “immigration and border security” are the main concerns for Republicans.

Independents? Inflation and inflation only. 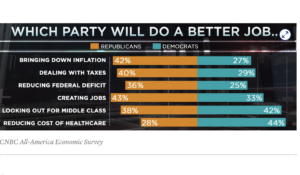 We’re seeing it across the country. It’s not out of the question that Republicans could win a Senate seat in Pennsylvania and Nevada. The Cook Political Report rated the Arizona, Colorado, and New Hampshire Democratic seats as “Lean Democrat.”

However, the poll found that Biden’s approval rate rose 10 points from July. It’s still below 50%, but still. That’s a big jump:

Biden’s overall approval rating improved 10 points from the July survey with 46% approving and 50% disapproving. Approval of Biden’s handling of the economy also rose 10 points, with 40% approving and 56% disapproving. While they were the president’s best numbers since 2021, the improvement came largely from increased Democratic support. Approval by independents on the economy remained unchanged from the prior poll at just 25%.

The survey discovered the view “on the current state of the economy rose 5 points” but still remains low. It also found:

Americans’ views on the current state of the economy rose 5 points from the prior survey, yet still remain at a low level. Only 16% say the economy is excellent or good, up from 11% in July; 83% call the economy fair or poor, the third straight survey where the percentage has been above 80.

On the outlook, 27% expect the economy to improve in the next year, up from 22% in July, with 45% expecting it to get worse, down from 52% in July. The 45% who believe the economy will worsen is the third most pessimistic result in the 14-year history of the survey, eclipsed only by the surveys in July and a year ago.

Awesome. If Brandon’s so popular, he should hit the road and campaign non-stop for the Democrat senatorial candidates in Georgia, Nevada, New Hampshire, and Colorado. Bring on those Brandon coattails! I can’t imagine a better gift to Herschel Walker!

Popularity is up 10pts based on what? His awesome Pittsburgh rally with Fetterwoman?

I’ll leave you with this anecdote. All of my liberal friends have stopped posting articles extolling Xiden’s virtues. In fact they just don’t post anything political on FB anymore. Hmmmmm It would seem that a certain segment that thought Trump was the anti-Christ are to embarrassed to admit that the alternative was this bad. FJB

I’m not hearing any bell. But I do smell dung.

Trafalgar has Biden under 40% approval. Trafalgar is also showing Walz losing in Minnesota.

They can fake biden’s ratings because there’s no impending falsification coming up. They can’t fake the midterm polls anymore because they’ll lose credibility when they miss by 10 points. They have to try to at least get within the margin of error before the election.

The numbers just reek of Democrat oversampling. Seriously, how could any rational person (yes, I know: Democrats) think that the Dems are better for the middle class, or any class for that matter?

Biden is getting polling points the same place he got “votes.”

One of the ideas put forward, by Lazlo Toth, was shopping malls that came to you instead of you going to them. Curiously, that seems to have happened now.

Speaking of the 1970’s – I see the Democrats are trying to bring back the Windfall Profits Tax.
Are we stupid enough to fall for something that restricts oil production a 2nd time?

In the 1970’s oil companies left oil in the ground rather than pump it out and pay the surtax.

Well, politicians of every stripe are stupid enough. The rest of us, not so much.

The only ones making a “windfall profit” off of oil are the federal, state and sometimes city governments.

Maybe they should give a windfall electric car tax bracket boost for all the subsidizing the gov’t does and the (for now) cheap refills they get. And you could tack a mileage tax on the electrics (although they will do it for all cars) to offset the loss in gas tax income, laughingly earmarked for “infrastructure” (read it: Dem slush fund).

Nixon also suspended redemption of USD for Gold. Why? Foreign govt’s were exchanging accumulated USD in their currency reserves for gold and draining US gold reserves. Why did they do that? They were very concerned about the rapid and escalating expansion of US govt debt and rapid inflation. Both of which reduced the value of the USD they held.

Biden’s approval rating goes up 10 points?
Why, who is changing their mind about Joe?
Have they kept him in his basement and I just
didn’t notice?

Poll pumping would be my guess. Question probably read something like – Is Biden the worstest prez ever since Hoover or nah he’s just not that bad? LOL Hey, look, Biden’s up 10!!

No need to “pump”, they just flat out make it up.

While encouraging, it still means that a point or two difference is all that divides the electorate. With a broken everything, R’s should be pulling away with double digit leads across the board. When all this ends next month, we will still be a country split near evenly right down the middle. Thus every election becomes the most important ever with a victory by one side an existential threat to the other.

If it says two points the real margin is sevenish.

Trafalgar says 5.3%. We need to just simply stop paying any attention to these polling firms that are always off by 5% or more, especially Quinnipiac.

That is before the shenanigans.

On the Plus side – Kamala Harris has now proved beyond a shadow of a doubt that – You can sleep your way to the top.

She and Camilla will have to compare notes.

That picture of Mitch…

B) has a white panel van, and buys candy in bulk.

You should not show a picture of Mitch. It will put the Democrats ahead by two points.

I never trust anything PMSDNC.

The bump in approval is from the student loan voter buy off. Nothing more nothing less.

Nah, not that much. Those dolts were already approving.
The bump is just another fabrication.

I find it interesting that the dem edge of the political coin scores better than the Republican edge on healthcare costs, considering that the medical community from 2021 on abdicated all decisions on Covid to politicians. From there, anything Covid got government reimbursement boosts starting a cycle of data GIGO. No one can now distinguish the true effects Covid had on deaths and hospitalizations.

No hospital or hospital group has become a leader in early treatment for Covid, That maybe because the reimbursements were so good or other pressures from the current administration. When has the Massachusetts General Hospital or the Mayo Clinic or other formerly great healthcare institutions not aggressively gone after “the best hospital for …” title? Individual doctors have had to now take up the mantle to adequately treat their sick patients without backing from their institutions who seemingly still want those extra Covid bucks for the diagnosis.

I believe historians will write about these times that medicine failed humanity in many ways, and the entire world suffered because of that.

The Mengele Years, American style, with a generous lashing of Lysenkoism.

The medical community is bought

Just unbelievable that they would rather cash a check than treat people from
Covid.

After 40 years in the business of health as an RN I am sickened.

Don’t trust any Dr under 40 is a good plan moving forward.

I have worked with the young woke idiots and know this to be true.

Or certainly, when medicine was politicized by the left…

However, the poll found that Biden’s approval rate rose 10 points from July.

Of course, it’s a lie. They just make up shit like this.

I wish you wouldn’t show that ass’s face. McConnell is the Swamp.

A week from now is the Traditional Scaring of the Voters, where the Dems bring out some weird fake story and the media promptly blasts it across every single information channel. So we’ll see what bogus wackadoodle fraud they try this year.

They’ve already started, the R;s are coming for your social security…

what social security? the democrats have already taken the money

The social security scare only comes up when the Democrats are really desperate. Oh, and in my nearly 50 years of voting, I have never once seen it work.

That poll has no track record that I could find, plus the 10-point change in Xiden’s approval rating is highly suspicious.