Mayer said this year, he is going as “an uber-woke, overly anxious, perpetually offended, 20-something.” 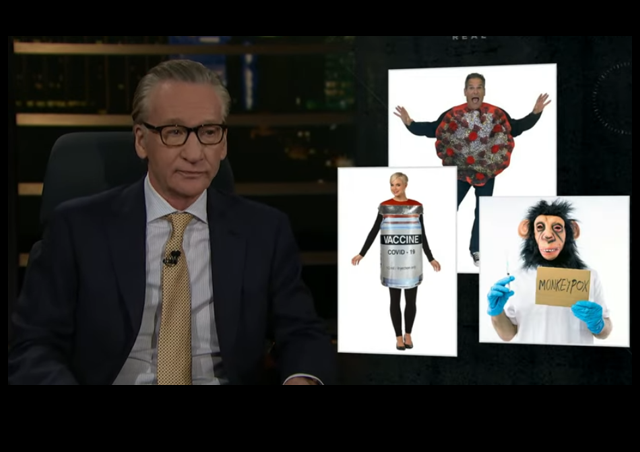 CONTENT WARNING: The content of the video below may be a bit spicy, so please be mindful if you hit the “play” button.

So, earlier this month, Buzzfeed decided to be the costume police and warn people about wearing 23 fun and funny ensembles. The prohibitions ranged from Queen Elizabeth, the covid virus, and Playboy bunnies.

During his recent show, HBO‘s Real Time with Bill Maher, the host gave an epic rant targeting Halloween costume scolds. Those tired of the costume moralizing and the lectures about cultural appropriation will find his monologue funny and biting.

“If Halloween is too much for your fragile sensibilities and you’re worried about seeing someone wearing something that’s on the forbidden costume list, just stay the f*ck home,” said Maher. “Every year we go through this bullsh*t. Lists of costumes you better not wear, lest the night of irreverent dress up spiral into something fun.”

He further added, “Halloween is supposed to be outrageous. It’s a festival of the sacrilegious and a celebration for the grotesque. From zombies to ghouls to bobbing for apples in other people’s saliva. Yet, every year, there’s a new list of offensive things we shouldn’t do on the day that’s all about being offensive.”

Mayer said this year, he is going as “an uber-woke, overly anxious, perpetually offended, 20-something”, which will require:

“A ‘f*** the patriarchy’ t-shirt, a check from the patriarchy (to pay your car insurance), a nose ring, a vape pen, a cloth surgical mask, surgical mask, N-95 mask, a face shield and then if you want to leave the house, you will also need Klonopin (to take the edge off), Adderall (to put it back on), a participation trophy, cat-ear headphones (to listen to sad music), a stick (that goes up your a**), a leash (for your support animal) and a wet blanket…”

I thought I would take this opportunity to share with our Legal Insurrection friends some of the most offensive costumes from my Halloween collection over the years.

Probably the most shocking is George Washington (a politician, a slave owner, and a member of the patriarchy)…and his mother. 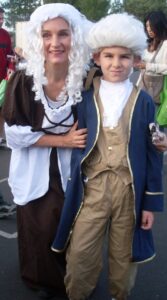 The last time my son when out for Halloween, he went as Crusader King Richard Lionheart…and I was his mother, Eleanor of Aquitaine.  Lots of points for being insensitive…though as we both are some percentage of British and French, no cultural appropriation occurred. 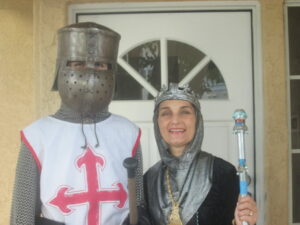 Since my son left for the US Air Force Academy, Halloweens have been spent at a friend’s house, where I pass out candy to the kids. Last year, we dressed up as characters from “Harry Potter”, which is a big “no” because J.K. Rowling is transphoic or something. 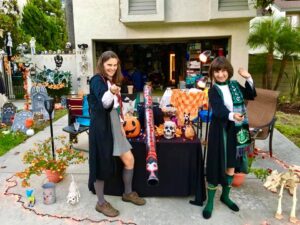 What am I going as this year? Persephone, Queen of the Underworld…inspired by this exchange.

Truly…like the moment Christ freed the righteous and the just from oblivion. https://t.co/WokE8yGyHa

Have a safe, happy, and politically incorrect Halloween!

Can I go as Biden, or would the costume be confused with a stumbling, brain dead zombie?

Dress up as Jill Biden and go as a carpet:

I’m thinking of dressing up as a breakfast taco, but that might be a little too unique.

Or wear a stinkie hoodie to cover the big lump in my neck? That would scare the crap out of little kids.

I would just send the lump out to get the candy and stay home.

Geez Leslie, you guys went all out!

My mom used to just scribble some whiskers on my face with an eyebrow pencil, hand me a stick with one of dad’s snot-rags wrapped around crumpled newspaper hanging from the end, while I wore one of his old flannel shirts to make me look like a hobo.

Our most memorable costume was when my oldest was four. We cross-dressed him perfectly with pearls, wig, makeup, and purse. Neighbors were totally unable to place him, as they began with the assumption that he was a little girl, dressed up. 😂

What’s fascinating is that today, that would either be deemed insensitive or it would be stunning and brave, all depending on what he secretly believed himself to be.

That was hilarious. Mahr is a genuinely funny man. However…….

Let’s not forget Mahr has been instrumental in getting us to where we are today. (Bill, how about a parody about your past political idioicy? Now THAT is funny.)

Also, let’s not get distracted by Mahr’s comment that pathetic young people were ruined by their parents. No, no, no – while the parents are too pathetic assholes, it’s the left/swamp/Islamic axis that has been instrumental in damaging the modern world to the extent it has been.

“Hey Paul How come you are pouding nails with a screwdriver?”

“Somebutt hole has my hammer.”

Apologies to the writer of the original thermometer and pen joke.

How about the famous OBAMA Rodeo Clown costume?

So self-respecting rodeo would have a clown like Obama.

Our son found a paper/fiberboard drum, turned it over, cut holes in it for his head and arms, decorated it with slime and other materials, rigged a container inside with a couple of tubes through the top, filled the container with dry ice that vented “smoke” through tubes and went out as a drum of toxic waste material.

I always revert to infantilism, I dress as a baby,,,,,,, before I turned into a dad bod, I had a lot of women offer to check my diaper…

On Purim it is now considered not PC to dress as a thug with blackpaint. Sooner or later, we won’t be able to dress like terrorists either for the same reason

“Now considered” by whom? Only by the same PC nutjobs whom Maher is criticizing in this piece. Normal people ignore them and dress up however they like. There is nothing wrong with blackface, and no amount of yelling and screaming will change that.

The funniest costume I saw this year was a Kyle Rittenhouse costume. Blue jeans, green t-shirt, tennis shoes, disposable nitrile gloves and an airsoft assault rifle with an orange tip.

Ha! If recognized, in some neighborhoods that costume would have wokester’s running away in terror. In others he’d be lifted up on shoulders and celebrated. Or at least get extra candy.