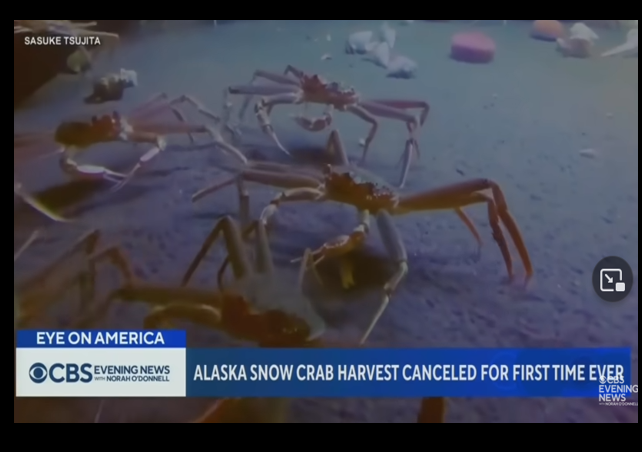 When my son was young, we loved watching together “Deadliest Catch,” a documentary series focused on the adventures and challenges of the Alaskan crab fishermen.

Unfortunately for all of Alaska’s fishermen, the snow crab season has been canceled due to a crash in the crab population.

The Alaska Department of Fish and Game announced Monday that the Bering Sea snow crab season will remain closed through the spring of 2023.

The season was expected to kick off in just days, but a survey by the National Oceanic and Atmospheric Administration [NOAA] Fisheries found a lack of adult crabs available for harvest.

“We use those numbers in an assessment model that get plugged into harvest strategy that annually determines the amount of crowd that can get harvested,” Miranda Westphal, a biologist with Alaska’s Department of Fish and Game, said.

NOAA surveys are conducted each year to help guide managing organizations with restrictions and limitations put on species during the fishing and hunting seasons.

It is estimated that the population levels have been reduced substantially from 2018 levels, and preliminary assessments indicate that overfishing is a significant factor.

The snow crab population shrank from around 8 billion in 2018 to 1 billion in 2021, according to Benjamin Daly, a researcher with the Alaska Department of Fish and Game.

“Snow crab is by far the most abundant of all the Bering Sea crab species that is caught commercially,” Daly told CNN. “So the shock and awe of many billions missing from the population is worth noting – and that includes all the females and babies.”

The Bristol Bay red king crab harvest will also be closed for the second year in a row, the agencies announced.

Officials cited over-fishing as their rationale for canceling the seasons. Mark Stichert, the groundfish and shellfish fisheries management coordinator with the state’s fish and game department, said that more crab were being fished out of the oceans than could be naturally replaced.

“So there were more removals from the population than there were inputs,” Stichert explained at Thursday’s meeting.

The development is coming as a surprise to the Alaskan fishing industry, based on catches from recent years.

The fishing industry was hoping for a snow crab surge this year.

In 2018, the ADFG recorded the largest juvenile snow crab spike in the fishery’s history, according to [Miranda Westphal, an area management biologist with the Alaska Department of Fish and Game], sparking hope that the fishing stock would rise. In 2019, the juvenile population was still high and promising. That year, the Bering Sea saw a historic spike in water temperatures.

The ADFG didn’t conduct a survey in 2020 due to COVID-19. When the agency returned to count crabs in 2021, it discovered “the biggest crash we’ve ever seen in snow crab,” Westphal said.

The industry is bracing for pain.

Jamie Goen, executive director of the Alaska Bering Sea Crabbers said some crabbers will be going out of business as a result of the cancellation.

“This is so unbelievable that this is happening. We have third-generation fishermen who are going to go out of business,” AP news agency quoted Geon as saying.

“Deadliest Catch” may still film this season, as there is one species of snow crab that the crews can catch.

Speaking to KING5, Bri Dwyer, the wife of one of the star’s Deadliest Catch, said that the fishermen found out at the same time as everyone else that the season was canceled.

Bri Dwyer, wife of Sean Dwyer, said that the fishermen are allowed to catch, Bairdi, a specific type of snow crab.

She said: ‘There’s a small Bairdi season, a little over 2 million pounds and we need to see if it makes sense for our boats.’

Hopefully, the low numbers result from an easily resolvable situation, unlike a deadly disease or the Chinese fishing fleet.

How about looking into the Asian fishing fleets as a cause?

That’s exactly what I thought

Yeah, but they can’t do that. It has to be our fault somehow.

Funny how Canada and Russia just had record Snow Crab seasons (Canada +30% yoy according to the Epoch Times). I guess that’s just not revalent especially with all the “coincidental” food production disruptions that are occurring all of a sudden around the world.

Might it be that Douglas Adams was wrong about which species will flee the Vogons first? Might it be they simply all packed up and left? They’ve always looked a little alien….

Thanks for all the fish.

Mainstream media does not even mention over fishing; they are claiming global warming. Send money now.

Wild overfishing by Chinese fleets would break their narrative. Far easier to blame global climate change, which the only fix is more power given to our elite and local fishing boats sent into bankruptcy.

Not easier, more desirable as you said about breaking the narrative.

Somebody help me out here. That’s a managed fishery. How does it crash with all that oversight and management?

I found this twitter thread on a Deadliest Catch board on reddit that explains what happened: https://twitter.com/unpop_science/status/1581660239501283329?s=46&t=7T9TAKg1XUj2cEFeQsaLJA

Short version is the crab harvests are regulated but NOAA and the state also allows bottom trawler harvests in the Bering Sea as well. They’re not hunting for crabs but they will pick up a lot of them as bycatch. And they operated is during the breeding season for crabs so they are wrecking the nurseries. Up until the 80’s there was a defacto ban on trawling but that changed. When it did, HUGE harvests of red king crabs dropped like a rock and stayed there.

The snow crabs live further north and like colder waters. They had been safe until recent years because of the sea ice preventing trawlers from hitting the nurseries. Past few years the ice stayed out longer and the trawlers got in there. People have been noticing that the show’s boats have been getting smaller and smaller quotas and having to move further north with each year..

NOAA and the fishing agencies have known what was going on for a long time and refused to do anything about it. To fix it they would probably have to close the Bering Sea to all fishing for 5-10 years to let the stocks rebound. Won’t happen of course.

So, complex ecosystems are complex. And authoritah are reluctant to do stuff that’s uncomfortable or inexpedient.

It’s like these attention-driven power-centers follow the whims of in-groups, to the detriment of out-groups. And making more of them, does more of that.

Who’d have thunk it?

I hate to state the obvious, but given that no govt agency can be trusted, how can anyone believe their survey results?

I recall seeing a couple years ago that some sort of fishing had collapsed off southwest Alaska, but that fish was becoming available off west-central Alaska, a couple hundred miles north. Looked like climate change causing the species to migrate to water at their preferred temperature.

Are the snow crab appearing further north now? Anyway giving them a year or two to recover or get established seems logical.

Yeah, noticed that too while fishing last year. There are a theory that it’s not only overfishing, but also change of cod hunting grounds that lead to this decrease in crab population: cod moved closer to where majority of crab population was residing, on top of that increase in water temperature allowed more cod to hunt deeper, hence closer to crab habitat. But that also means that next year cod population might drop drastically due to decrease in crab(main food source). Going to visit my uncle(already packed my rods and fishing pants) check if I can catch some this year in Alaska, or if prime fishing spots moved even more north…