The last Trafalgar poll had Vance up by five. 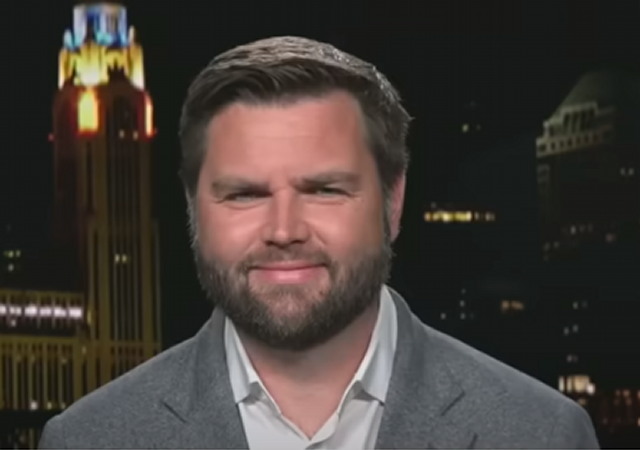 Democrats and the media have worked very hard to demonize Ohio Republican U.S. Senate candidate J.D. Vance, but it doesn’t appear to be working.

Tim Ryan, the Democrat in the race, was off to a good start, but as of now, the Real Clear Politics average of polls has Vance up by 2.3 points.

The Hill characterizes this as a tight race because Ryan has a one-point lead in one poll:

A USA Today Network Ohio-Suffolk University poll released Monday found that 47 percent of Ohio general election voters said they would vote or lean toward Ryan if the Senate election were held today, while 46 percent said they could back Vance.

Six percent of respondents in the poll said they were undecided, while 1 percent said they would support someone else. The slim margin between the two leading candidates falls within the poll’s margin of error of 4.4 percentage points…

The Ohio Senate seat is considered one of the most competitive races this election cycle, which has been rated by the nonpartisan Cook Political Report as “lean Republican.”

The last Trafalgar poll had Vance up by five.

Ryan and co-host Willie Geist were discussing J.D. Vance, Ryan’s Republican challenger for the open Senate seat in the upcoming election. Geist noted a recent poll showing the two candidates trending closely, with Geist asking Ryan if he had a message for Republican voters in Ohio.

“I’m one of the most bipartisan members of congress,” Ryan said. “The last two congresses I have been in the top 10% of most bipartisan. I want to work across the aisle. Look, Democrats aren’t right on everything, and I’m willing to sit down and have conversations about how we can move out of this age of stupidity and into an age of reconciliation and reform, how do we fix all of these broken systems.”

It’ll be fascinating to see how that goes over with Ohio voters.

In his speech on the House floor, Hoyer was going after supporters of President Donald Trump.

“They have made it quite clear they want to eliminate what they call the Deep State,” Hoyer said. “The Deep State is a cadre of professionals dedicated to honoring the Constitution, the laws of this country, and carrying out the policies of the Congress and the president.”
https://twitter.com/greg_price11/status/1570456189464608769
.. so it does exist

““The Deep State is a cadre of alleged professionals dedicated to dishonoring the Constitution, enforcing only the laws of this country the like, and carrying out the policies of the Democrat Congress and the president, with a Communist flair.”

Actually, he has been up in real polls like Emerson and/or Susquehanna since mid Aug.

The polls like UGov and most of the local or college polls have flawed polling using registered voters vs. likely or polling Dems are under polling independents and republicans.

The ones with the huge spread for Dems in what are obviously close races are simply propaganda trying to discourage opposition to the foregone conclusion of perpetual Democrat rule.

If MSNBC only has you up by a point then you are screwed. Didn’t they have Hillarity up by 8 or 10? Ohio is now 81 counties red and 7 blue. Trump took it there in 2016 vs Obama carrying 17 in 2012. The dems might own the unions, but they no longer own the union members who have figured out who their friends aren’t.

At least until the union force collects “mail in ballots,” at work and “adjudicates” them before sending them in.

Chuck Schumer thanks you from the bottom of his heart for telling Ohio Republicans and right leaning Ohioans not to vote. He is overjoyed because Democrats lost the following elections in Ohio

Although the evidence of voter fraud turning a single election in Ohio in the 21st century doesn’t exist, and isn’t overly large for the 20th century Churck Schumer is overjoyed you won’t let that stop you from demoralizing your own side with talk of non-existent voter fraud in a state that has in the last 12 years has gone blue a grand total of one time.

((Hint STOP PARTICAPATING ON THE OTHER SIDES PROPAGANDA MACHINE!!! Democrats love that the message of “your vote doesn’t count” is on Republican sites it translates to people reading DONT VOTE!)

I can’t imagine the beating of the elections are rigged drum changes anyone’s mind. It’s sort of like elevator music at this point, you hear it but it’s just background noise that you don’t pay attention to.

We’ve had stolen, rigged, and corrupt elections since practically the beginning, and it’s not going to change. Most of the corruption and cheating is in Democrat-led areas (as is true in the 2020 election), so if one is so worried about how corrupt one’s area is in terms of voting, either do something about it or move to a place where Dems DON’T control the voting, counting, or any part of the process. And move fast because it’s soon going to be much harder to do so. Those of us who do not live in Dem-controlled areas (over voting, counting, etc.) don’t distrust OUR elections or think that voting is a waste.

If–as seems to be the case for some unknown reason–some people think all voting precincts and the whole election process is rigged or corrupt in every single instance, there’s no changing that with logic because the conclusion was not arrived at by logic, so just let it go. You can’t name that elevator tune two seconds after stepping off, right?

That is a good way to look at it that I previously didn’t, but the pushback could still hopefully make him worried that if he say tries the same thing on Facebook which is despite decline still important he will be made to look like a fool.

That comment about the Ohio elections being rigged in favor of the Democrats simply put made us all look crazy (it might as well have been about Wyoming or Utah).

Some Dem some day using that kind of language is going to face someone who offers to give him that opportunity right then and there.

I”m not a Vance fan but he’s still better that the low-life liberal.

Absolutely. For the rest of my life, anyone opposing the dem will get my vote.

Voting 100% with Biden does nothing for any Buckeye. Even the ignorant who vote for dems.

1) Always assume that the polls are rigged. There are no honest polling companies, just as there is no surety of honesty in vote counting. Almost all exist to push the idea that the Leftist/Democrats are going to win. Only if things are so bad for the Democrat that a Democrat lead would reveal the bias will they show a Democrat even or behind.

2) Noting that much of the Republican Party is in feoff to the Leftist/Democrats, it is necessary to break the Democrat control in order to focus on the GOPe if there is to be an electoral next step. So don’t believe the polls and unless it is someone who is an obvious Vichy Republican, vote against the Leftist/Democrat.

3) Even if the elections are as rigged as the polling, it is vital that every counter-Leftist/Democrat vote be cast. Because eventually it will help people realize the theft and make them realize what they are dealing with.

Ryan was, is and will forever be an idiot. He is also all bark and say whatever he thinks is best for him but in the end he caves to whoever is pulling his chain.

These polls are why Mr. Ryan made the comments about the ‘MAGA Republicans.’ He understands that support within his own camp is going soft. A fair number of Hispanics, a lot of urban, working-class whites, and some appreciable number of married white women plan to vote for Mr. Vance. Ryan needs to get all those back or he’ll lose beyond the ability to cheat.