“The jogger, Chris Miyares, was found at the time to have committed no crime.” 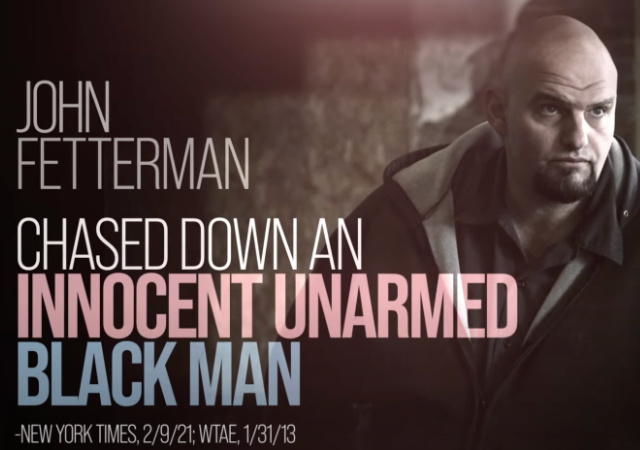 New: Oz Super PAC is dropping an ad going after Fetterman over the jogger incident in Braddock.
Airing exclusively in the Philly market.

Networks include MSNBC, BET, OWN, ESPN, CNN and others pic.twitter.com/5vNKt2L787

What is this incident they are referring to?

During Pennsylvania’s Senate primary, Black Democrats worried that the GOP would target voters with ads about the time John Fetterman pulled a gun on a Black jogger he wrongly suspected of a crime.

“I may have broken the law”

For a DemoRat no problem.

They have “Democratic Immunity.”

Because OZ won’t do it himself

Maybe he doesn’t want to win

If you take down the King, you better kill him

Isn’t that how the saying goes?

Feet is no King but in PA he has support and political standing, Oz is seen as a carpet bagger

The carpet bagger needs to pull the rug and start cleaning house, this isn’t Oprah’s house

What specifically should Oz do, that he isn’t doing? I don’t know what’s going on in PA, so tell me.

I saw the best explanation in a recent editorial cartoon:
“Think of this election as a choice between Oscar and Felix.”

Good, a dose of their own medicine.

This won’t move the needle IMO.

Oz is such a dud candidate and I don’t know anyone that even thinks he is defensible. I’d love to hear someone here come up with something better than Trump endorsed him.

To be very clear to the outrage patrol, I may not have made it clear that I would still vote for Oz over this Marxist jackass but that’s a low bar.

What I mean by not defensible is that he won’t convince many if any fence voters to push him to a win. He’s a losing candidate. I wish more would see beyond the Trump endorsement to see that.

Ok how about 2 extra years of Biden judges being churned out as soon as Joe Biden writes down a name on a piece of paper?

How about the way Democrat judges are just rubber stamps of the Democrat Party?

How about the filibuster dying because Joe Manchin doesn’t matter if it isn’t a tie vote and the Democrats pass their entire agenda into law and pack the courts?

I could go on but I am sure Chuck Schumer loves that you hate Mehmet Oz for reasons best known to yourself.

He is campaigning on exactly the same things other Republican senate candidates are. He may not be the most skilled (literally his first campaign) and he may be lying about his changing all of his views (alternatively he has no beliefs or he is telling the truth and has changed his perspective) but make no mistake he is someone you need in the senate if you don’t want the Democrats to have many major permanent victories over night.

This is a binary if you don’t support Oz you are a supporter of Fetterman.

We point out that Oz is running an entirely incompetent campaign against a mook that Pat Paulsen could beat, so we “hate Oz?”

Take your “if you aren’t drinking the Kool-Aid and shutting up you’re the enemy” bullshit and shove it.

Defensible? What is there to defend? He’s a highly educated guy with careers in both medicine and showbiz. A reasonable choice for Senate right there.

By the way, the biggest problem with this is not what he did as much as that if he weren’t the mayor of the city he likely would have been arrested and put out for the political lynch mob to attack for his racism.

It clearly and nakedly displays his dem privilege because you can’t be racist if you have the right political talking points out in front of your alleged crime.

Wasn’t there a really big case a little while ago where some guys did the exact same thing? Even the guy that filmed it went to jail for murder.

to be fair they actually shot that guy.

In a struggle over the gun. No struggle, no shot.

But that verdict was a historic miscarriage of justice, by the jurors of Georgia.

By the same logic then, no chase down the street, no struggle, no shooting.

It’s one thing to chase someone off the property. It’s another thing entirely to follow them off the property and attempt a detention. Decisions have consequences as everyone involved in that fiasco discovered.

I don’t know which is worse: Fetterman pulling a gun on a “they all look alike” black jogger, or the fact that Fetterman is a poster boy for leftists that will vote for anything with a “D” after it.

As noted above, the media will bury this somehow.

I absolutely loathed Fetterman, but upon reading this story he now has my full support.

If you have half a brain, Fetterman’s going to need it.

Well, they did vote to put a dementia-ridden, mentally retarded pedophile into the white house didn’t they?

This is why Democrats think all Republicans are racists.
Democrats know this how they think and behave.
Since it is well known that Democrats are the good guys, it is obvious that bad guy Republicans must be really really racist.

Excellent. Make the Collectivist scum play by their own set of rules.

Probably targeted at the independent’s in the suburbs. Many are wealthy enough that inflation hasn’t hit them hard yet and being for climate crisis legislation makes them feel like they are on the side of good.

Exposing Fetterman as an entitled racist who has never held a job might give them pause before voting D in the midterms. If it diminishes liberal turnout or vote by mail then mission accomplished.

Yeah, well…
So what?
Hard to tell from here….

I’ve read about the time Fetterman chased down a black jogger and put a shotgun in his face.

This is the first time I read he was in his truck.

Now it makes sense. I always wondered how that dump truck could run down anybody.