Now That Gaetz Doesn’t Need to be Silenced, Reports Emerge He Will Unlikely Face Charges in Sex-Trafficking Probe

Now That Gaetz Doesn’t Need to be Silenced, Reports Emerge He Will Unlikely Face Charges in Sex-Trafficking Probe

The left wanted to make Gaetz a pariah. It worked. Plus, dropping the latest development on a Friday means the MSM can bury it and keep him a bad guy in so many eyes. 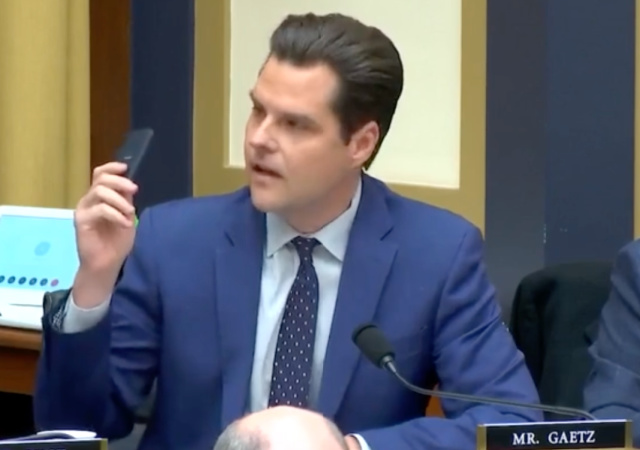 The Federalist’s Mollie Hemingway penned an article spilling out everyone’s thoughts at the news of the DOJ unlikely charging Rep. Matt Gaetz in a sex-trafficking probe.

Between January and March 2021, Gaetz caused tremors in D.C. when he pushed against the grain and threw truth in the left’s face:

Following the Jan. 6, 2021 riot at the U.S. Capitol, Gaetz defended concerns about election integrity, reminded Democrats of their support of nationwide riots the preceding summer, and criticized media and political overreaction to the rioters. He remains one of the very few Republicans to focus on the plight facing the men and women the Justice Department are targeting, just years after the department largely ignored the destructive nationwide riots that besieged the White House, federal courthouses, police precincts, and national monuments.

When Rep. Liz Cheney, R-Wyo., received praise from Beltway insiders for leading a small group of Republicans to join the Democrats’ second impeachment of President Trump, Gaetz immediately went to Wyoming to rally Republicans. The two had repeatedly sparred over Cheney’s support for lengthy and poorly managed foreign wars that Gaetz said did not serve American interests.

“We are in a battle for the soul of the Republican Party, and I intend to win it,” he said at a Jan. 28, 2021, rally in Cheyenne, long before she would be ousted from her leadership position in the House Republican conference. “You can help me break a corrupt system. You can send a representative who actually represents you, and you can send Liz Cheney home — back home to Washington, D.C.” Harriet Hageman delivered a humiliating primary defeat of Cheney less than two years later.

We can’t have that happening. It is no coincidence that an anonymously sourced report accused Gaetz “of possibly being a child sex trafficker” at the end of March 2021. The New York Times led everyone to believe Gaetz would face charges in the near future.

The report contained no hard evidence, which means the reporters had to assemble a word salad to make Gaetz appear guilty. We all know the proof is passé, and it’s about the public court. We also know many people don’t make it past the headline.

If the Grey Lady says something is going to happen, then it will happen, right?

The Washington Post revealed on Friday what we already knew: Gaetz would not face charges.

WaPo relied on anonymous sources like the NYT did with the March 2021 report.

The DOJ saw “credibility challenges for the two main witnesses.”

Mollie pointed out the left’s plan worked because no matter what happened in the end, the story silenced Gaetz at a critical time:

The damage was already done by the initial report, written by reporters who regularly regurgitate political leaks from Department of Justice and FBI sources.

“Matt Gaetz’s days in politics are likely numbered,” one CNN reporter claimed days after the initial report, noting how few people had come to his defense.

Of course, as even The Washington Post admitted, “Gaetz’s position is shaky. The allegations are of a sort that makes it very difficult for his colleagues to come to his defense. … [T]here’s an obvious political risk to vocally defending someone who might face sex-trafficking charges, so expect his political allies (including the former president) to remain fairly muted.”

That was the goal of the politicized leaks. Gaetz couldn’t very well critique the Department of Justice for their political prosecutions if he was a pariah who everyone thought was a pedophile.

Gaetz is not going away. He won his primary in August and will likely win re-election in November to continue representing Florida’s 1st Congressional District.

But the mainstream media will not publicize the recent developments as it did with the initial report. I mean, WaPo dropped it on a Friday. They want to bury the news. This way, Gaetz remains an outcast.

Significantly, New York Times columnist Bret Stephens unleashed his anger on the FBI over the Gaetz debacle and the apparent political bias showcased in recent years:

Bret: The investigation of Matt Gaetz, Republican of Florida, which looks like it’s about to fall apart, is an F.B.I. disgrace for the ages. It should force heads to roll. And Congress needs to appoint a Church-style committee or commission to reform the bureau. After the Ted Stevens fiasco, James Comey’s disastrous interventions with Hillary Clinton’s emails, and the bureau misrepresenting facts to the Foreign Intelligence Surveillance Court as part of its investigation of Trump and Russia, something dramatic has to change to save the F.B.I. from continuing to lose public trust.

Bret: I’m upset by a longstanding pattern of incompetence tinged by what feels like political bias. I don’t like Gaetz’s politics or persona any more than you do. But what we seem to have here is a high-profile politician being convicted in the court of public opinion of some of the most heinous behavior imaginable — trafficking a minor for sex — until the Justice Department realizes two years late that its case has fallen apart. We have a presumption of innocence in this country because we tend to err the most when we assume the worst about the people we like the least.

Of course, Gail Collins made a snarky comment: “Nothing nobler than ranting about a basic moral principle on behalf of a deeply unattractive victim.”

Stephens reminded Collins: “He’s the yang to Lauren Boebert’s yin. But no American deserves to be smeared this way.”

Stephens is correct. No American deserves it no matter your political party or views.

I think it’s worse that the mainstream media jumped on it. As if we needed more proof the media we should trust have no integrity.

Anonymous sources are used way too much. And that’s when they actually exist.

They will simply invent a new charge and reset the clock

The FBI being disgraceful is the understatement of the year.

When I read an article in which all sources are anonymous, I simply discount completely the point, the sources, the reporter, and the issue.

If no one’s on record, there is no story.

Whenever I see something attributed to an anonymous source, I tend to believe the writer made it up and discount it completely. That or it’s a leak/smear from the FBI/DOJ/CIA/State Dept and likewise discount it as unreliable and false.

The court of public opinion is all that matters in an Athenian Democracy. They would slander anyone who they thought was too powerful or against the will of the majority, and vote to ostracize them. Minority rights were forbidden. It is no coincidence that the democrats lately have been talking about “protecting democracy”.

Funny how faked evidence can be used to falsely prosecute someone, but when there is evidence of real child trafficking, such as the Epstein case, the client list is “lost” to history, and the perps get away, scot free.

That’s how you KNOW that the list is full of Democrats.

I’m upset by a longstanding pattern of incompetence

Idiot. It’s a longstanding pattern of malice, not incompetence.

The Democrat party is the party of pedofiles and perverts. Prove me wrong.

Gail Collins made a snarky comment: “Nothing nobler than ranting about a basic moral principle on behalf of a deeply unattractive victim.”

Indeed, perhaps snarky but also literally true: “Nothing nobler than *upholding* a basic moral principle on behalf of a deeply unattractive victim.” Or even people who are wrong, regardless of their looks.

The proper response to that snark would have been, “I would do the same for you.”

I like to point out that some of our most famous civil rights protections have come at the benefit of deeply unattractive criminals. Many people don’t remember that “Miranda” was a rapist… who got off.

Whistle blowers at the FBI are being suspended or fired in violation of law.

After that blowhard Grassley promised to protect them. I.e.: the same way he protected Kavanaugh from Blasey-Ford’s brazen, fabulist and easily disproven lies.

The IG for DOJ and Judiciary needs to have their own investigators, prosecutors and judges.

It’s a smear campaign against a republican based on little to no evidence. On the other hand, Epstein’s videos will never be shown.

Gaetz can at least fight the charges. SOP for us ordinary people at the bottom of the GOP food chain after having an anonymous charge leveled is the prosecution will promptly leak like a sprinkler to the employer, to the spouse’s employer, to the school, to Child Protective Services, etc… Then the charges mutate every month, forcing the defendant to burn legal cash until they are deep in debt and frantic to do anything they’re told, and ordered to plead guilty to a nonsense charge in exchange for having the bogus charges dismissed. (which never could have been proven in court anyway, but the process is the punishment)