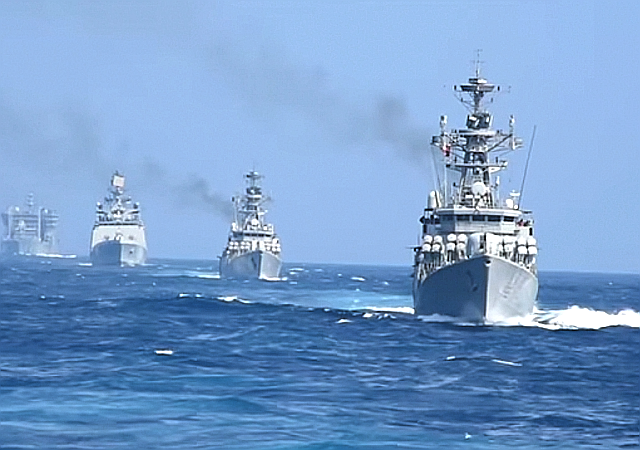 India is fortifying its borders and bolstering its naval defenses amid the growing Chinese military threats. On Friday, New Delhi commissioned the nation’s first home-built aircraft carrier as it seeks to counter China’s growing naval buildup in the Indo-Pacific.

The aircraft carrier “262m (860ft) long and almost 60m (197ft) tall – is the first aircraft carrier India has designed and built on its own. It has the capacity to hold 30 fighter planes and helicopters,” the BBC reported. “India’s other aircraft carrier, INS Vikramaditya, can carry more than 30 aircraft.”

The launching of a domestically produced aircraft carrier — which takes the number of India’s aircraft carriers up to two — also highlights that New Delhi is moving away from Russia, the country’s largest military supplier. According to some estimates, about 70% to 85% of India’s military systems are of Russian origin.

Despite these advances, India faces the world’s most formidable navy in the Indo-Pacific region. China has three aircraft carriers in service; the fourth is in the pipeline.

Beijing is ramping up its naval capabilities at a rapid pace. China’s “People’s Liberation Army Navy (PLAN) has surpassed the United States Navy in total battle force ships, approximately 360 to 297, with future projections expecting the gap to grow,” foreign policy journal The Diplomat noted in April 2021. “By 2025, the PLAN is predicted to field as many as 400 vessels whereas the United States plans only to field 355,” the periodical added.

After deadly clashes with the Chinese military two years ago, India is bolstering infrastructure leading up the borders. In July 2020, New Delhi accused the PLA of attacking Indian border posts, killing at least 20 soldiers, and occupying a strategic valley in the country’s northern Kashmir region.

China refuses to recognize the 2100-mile border it shares with India and has made territorial claims on the Indian side of the border. The Chinese military also occupies around 15,000 square miles of Indian territory following the war of 1962 waged under Mao Zedong’s reign.

An Indian Army official on Saturday said that massive infrastructure development is being done along the Line of Actual Control (LAC) in order to make surveillance more efficient as the close watch of hideouts become difficult due to the mountainous terrain and forest area.

Besides ensuring security, peace and tranquillity, the Indian Army is also engaged in infrastructure development. The Army patrols day and night on the remotest route along the border with China which does not even have proper road connectivity making the task even more difficult.

In view of the face-off between Indian and Chinese forces in April-May 2020 along the LAC in Eastern Ladakh, the Army is working to further strengthen its borders.

Under President Donald Trump’s watch, New Delhi joined the U.S.-led Asia-Pacific alliance revived by Washington as a counterweight to Chinese militarism. The Quadrilateral Security Dialogue initiative, also known as the “Quad,” is a four-nation geostrategic alliance comprised of the U.S., Australia, Japan, and India. The coalition has created a framework for security cooperation, including joint defense exercises and access to each other’s military bases.

Next month, Indian and U.S. troops are set to conduct joint mountain combat training in the Himalayan mountain ranges. “The military drill will take place from October 18 to 31 at an altitude of 10,000 feet in Uttarakhand’s Auli [northern India] and will focus on high-altitude combat training,” Indian newspaper The Hindu reported earlier this month, citing U.S. defense sources.

China, which is currently holding joint military exercises with Russia in the Russian Far East, has been angered by the prospect of a U.S.-India drill on the Indian side of the border. “We firmly oppose any third party to meddle in the China-India border issue in any form,” a PLA spokesperson complained.

And India will defend itself with Russian-made weapons.

Good money says that Taiwan has missiles aimed at the dam, and they’ve ‘leaked’ to the Chinese government what might happen if the island gets invaded. One missile would crack that thing like an egg, and the resulting rush of water would sweep away a good chunk of China’s industrial cities and farmland.

India would likely do the same, if pushed against the wall. In a way China built a nuke on its own land, one anyone can set off.

No, a single missile will not “crack that thing like an egg”, not even close.

India and every other civilized country that has an ounce of common sense utilizes their military to protect their border except for the country formerly known as the United States.

“We firmly oppose any third party to meddle in the China-India border issue in any form,” a PLA spokesperson complained.

Sounds like a signal to expand our joint military exercises with India. And maybe send more of our politicians on visits to Taiwan. I wonder if Japan. UK and Australia are interested in participating? The more the merrier.

Regarding your last sentence, they likely will be very glad to hold our coats while we do the work.

The Brits and Aussies are about as faithful allies as we can expect. They have both been quite generous with their support this century. They are allied Nations with their own interests and we shouldn’t expect them to do more than help us when our interests coincide. They fact that both have gone above that threshold should be recognized. It isn’t as if they were France or Germany.

The Aussies have been pretty faithful, including helping in the Vietnam “war”. Given recent news I think that is probably at an end, but they get lots of credit for standing with us. The Brits have done pretty much the same.

No coat holding, they have spilled blood.

India’s independence is newer than ours, and they still consider themselves to be a country. That is something that stopped here decades ago.

China is not attacking over the Himalayas. They don’t have the logistics to do it.

On the other hand, India could interdict tankers carrying oil past theircoasts and completely destroy China. Within 3 months cars and trucks would qit running. 6 months later the lights would go out. After a year, 300 million dead Chinese.

“The more the merrier.”

And the merrier we are the more the left hates us.

I would help arm India to the teeth and then some to make their border with China completely impervious.

The CCP woke up their neighbors. And got caught demonstrating there’s nothing to lose. Get crushed opposing them. Get crushed not. You still get crushed. (Cough — Hong Kong — Cough.)

Part of the India-China border is still contested territory, and the two countries have occasionally had skirmishes in the area.

Part of India’s Arunachal Pradesh is claimed by the Chinese, and unfortunately numerous WWII American and Allied aircraft crashed in this area, as it was the prime southern supply route to avoid the highest portions of the Himalayas.

For decades, India has used the issue of “border insecurity” to prevent DPAA recovery teams from accessing known crash sites to recover and repatriate remains of American aircrews. Many of these men were part of my uncle’s unit, Chennault’s 308th Bomb Group of the 14th USAAF, and a few had flown with him before he was killed in a crash in southern China himself.

Somehow I have trouble believing that India’s Navy could defeat China’s Navy.

But, of course, they lead the world in Call Centers so who really knows?

Even so, it does put a squeeze on China’s sea power which is still basically an untested coastal navy. Adding a large aircraft carrier changes everything for India’s reach and ability to project power effectively. The question is: can they defend it and where?

Both those Navy’s put together would have trouble with Old Ironsides. China’s navy is laughable. India with an aircraft carrier? This requires actual training, and lots of it. India has a difficult time putting pilots in the air to train, much less in the air and at sea.

China may have more battle force ships than the US but quality is also a factor. I doubt they are confident that they ready to engage in a major conflict. That is one big country surrounded by enemies along most of its borders. Were they to attack Taiwan, they would lose much of their navy which is sitting in the narrow straits of shallow waters. They might be capable of capable of flying their jets around Taiwan but the navy still cannot pose a threat to the east coast of Taiwan. That is why they are determined to take control of the island chains from Taiwan to Australia. They are still a trapped navy.

And any major conflict they start would trigger reprisals along their borders and vulnerable key sites inland. Russia is NOT their ally. They are lusting over pushing China out of Siberia where they have been encroaching into Russia’s farmland, essentially annexing it inch-by-inch.

And with economies collapsing globally, a world war would collapse everyone except maybe the US which is still the only country capable of going it alone. As I keep pointing out, on short notice, we can again become the most robust energy producer again, retake and restore our agriculture production and rebuild our superior manufacturing capabilities. And we are protected by two very large oceans.

The biggest disadvantage we have is we value life and do not accept the billions of deaths that would result from a nuclear war. China and Russia are perfectly willing to accept the loss of half or more of their populations as a cost of “winning”. We would see that as “losing”.

Our traditional, foundational economic practices are light years ahead of these communist economies in terms of efficiency. Our freedom is what breeds innovation and invention.

We create and evolve much faster than anyone else and given our geographical advantages, we should be unbeatable by foreign enemies. It’s those domestic enemies that we will be voting out of power in November that stand in our way. We are two years away from again dealing with our foreign enemies and the fear of Trump’s return must surely be making them think twice. We are coming and they know it.

Chinese navy is a joke. It has very little capability more than a few miles from their shores. The entire military operation of China is a police unit primarily, to keep the dissidents in line.