Illinois Will Eliminate Cash Bail for Some Crimes, Including Second-Degree Murder

Illinois Will Eliminate Cash Bail for Some Crimes, Including Second-Degree Murder

By the way, you’re racist if you voice any criticism. 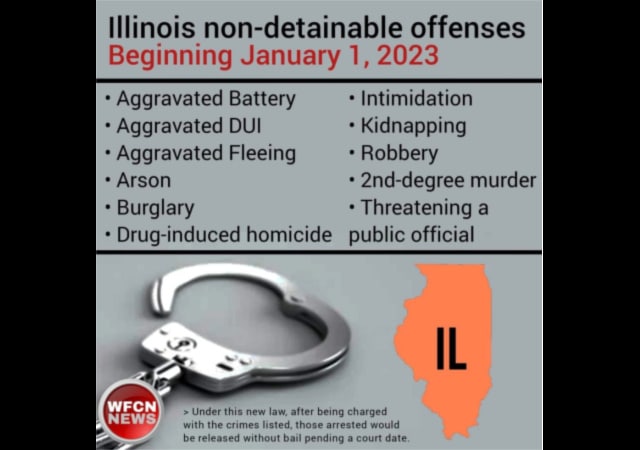 Cash bail in Illinois will end on January 1, 2023, for some crimes, including second-degree murder.

Crime has been on the rise in Illinois for years. How will this help keep our communities safe? #twill #VoteNewIn2022 pic.twitter.com/kWYmgxmYZ6

Under Illinois second degree murder laws, in order to get a conviction for the offense, the prosecutor must show beyond a reasonable doubt that the defendant killed an individual without lawful justification and either:

Illinois second degree murder laws charge the offense as a Class 1 felony. This carries a sentence of between four and twenty years in prison. Depending on the leniency of the judge and the circumstances of the crime, a four-year probation term instead of prison may be an option. The maximum fine is $25,000 plus a surcharge of $3,125. Upon release from prison, there is a mandatory two year parole period.

Grundy County Sheriff Ken Briley told WLS he has concerns about how the law will impact his community:

“Today, I can arrest him if you sign a complaint for trespassing,” Briley said. “January 1st, I’m not going to be able to do that. The law says I have to write him a ticket and leave.”

Sheriff Briley worries about the possible ramifications in his community.

“And if we can’t arrest them and solve people’s problems, we don’t want people to take matters into their own hands,” Briley said.

Of course, the Democrats and the left scream racism when someone disagrees with the Safe-T Act. Gov. JB Pritzker is his usual classy self:

“This is a messaging that’s coming from a racist political consultant, who used to associate himself with Illinois, now lives in Florida. And he’s sending messages that are, if you look at what he’s printed, it’s clearly all about the idea that, again, what he’s printing, that Black people are threatening your way of life. That’s essentially what he’s putting in these publications,” Pritzker said of Proft at an unrelated event in south suburban Harvey.

“It’s a scare tactic. It’s meant to have people (show) concern for their safety. And the truth of the matter is that what he’s purveying here is complete hogwash. I’m probably being polite when I say that. It’s disgusting. It’s a terrible thing to do,” he said. “And frankly, he’s doing it on behalf of Darren Bailey. And that says as much as you need to know about Darren Bailey.”

JBelly infuses race into every, single policy debate. He never deal on the merits, particularly on public safety. He signed the state's death warrant with his no cash bail law.

Challenge to JB: name one specific item in the newspaper you excoriate that is untrue or inaccurate. https://t.co/cxGcR0HWjJ

Illinois Legislative Black Caucus had a similar response to the Republicans in the state government:

“As usual with the Republican Party, any effort to make the justice system fairer for Black people is called ‘dangerous,’” the ILBC leaders stated. “We are improving public safety, supporting law enforcement, and ending systemic injustice at the same time.”

There is no saving them from themselves- until the people vote these leftists out and restore order, there will be none. (They voted them in)

The election commercials write themselves.

1) Will the Republican Party in Illinois write them? I rather doubt it because it would oppose their masters.

2) I rather suspect the media in Illinois will find a reason not to allow them to be run.

And, a Conservative is a liberal who has been raped.

Hmm, that has been upgraded somewhat. Last I heard all a libtard had to do was get mugged before they learned some sense.

That’s before they found out that that was racist.

“….you’re racist if you voice any criticism.”

Is that because if you are attacked, the chances are it will be by someone from a different race? That should be considered a privilege, right?

Black citizens will suffer the most from new law. But then again maybe that’s the intent in some perverse way.

Oh, it’s not perverse at all. Whenever black citizens suffer the marxists promise a solution and get their vote. The suffering gets worse, more promises, more votes, and more suffering. It’s a plan.

Liberal: Why id crime increasing? Gee, we don’t know we didn’t Nothing and it didn’t work.

At least when they do this kind of stupid thing they only hurt the people stupid enough to elect them.

Are you forgetting the 40% who voted against? Although why any republican stays in a city like that I don’t know.

Not just Chicago. The whole bloody [in both senses] state.

I’m not, but sometimes you really do have to vote with your feet. I did it years ago and am so much better for it,

A huge percentage of blacks embrace the ghetto gangster culture and are criminals. Democrats pander to these criminals by not punishing criminals.

“At least when they do this kind of stupid thing they only hurt the people stupid enough to elect them.”

NO. Once something like this starts it propagates throughout the nation and pretty soon it’ll be the law almost everywhere. EVERYONE gets hurt no matter how they voted.

IANAL but after reading this:

Seems to me that pre-trial detention should be determined based on “risk” and not financial status. But since the whole purpose of “Criminal Justice Reform” is not to incarcerate because “equity”, the issue of bail/no bail is just another sham.

If Fat Boy Pritzker and his good-time buddies were actually and secretly trying to ensure the return of street justice and vigilantism…what would they be doing differently than what they’re doing now?

When I am in my car in the morning, my radio is always turned to Dan’s show.

I heard Dan talk about his 30 second commercial.

The commercial contains parts of stories that were shown on broadcast news shows and quotes from two Chicago area DAs (Du Page County – a republican and Will County – a democrat.)

The most outrageous part of the commercial is that it is ACCURATE!!!!!!

Another great reason never to go to the anti legal gun and criminal friendly Illinois.

Excellent. I am a big fan of no-cash bail in Illinois. And California. Just as Texas and Arizona are bussing illegal aliens to DC and NYC, they should bus felons to Illinois.

I rather suspect that “Threatening a Public Official” will be removed from the list based on the legal doctrine of ‘those in power can do what they want’.

So they’re keeping the criminals in jail? That’s great news! The streets will be so much safer…. Oh, wait. You mean they’re just dumping them back out and letting them commit more crimes while waiting for a court date, if any?

This is all done on purpose. When the resulting chaos in our streets occurs then these same leftist will demand a Federal Police Force or Gestapo as the solution.

GeorgFelis is correct. The left and the media have re-defined terms again., It used to be that “no bail” meant that the accused remained in jail pending trial. Now, it means the accused is freed without the need to post bail.

The folks of Illinois can either muster the votes to defeat this sort of nonsense or depart. Sell your home and business. Pack a Uhaul and depart for saner pastures. There are plenty of places where the forces of anarchy don’t prevail.

The only problem is that Illinois will still have 2 Senators.

True, but the lost CD flow to other States. Speaking of which, the last reapportionment was jacked via over count in blue States and under count in red States. Add in the out migration from blue enclaves since and that’s likely 6 a CD swing today. If it continues then that’s building up towards a dozen+ seat swing from blue to red in 2032.

I live in Illinois, and there is virtually no way for us to rid ourselves of this plague. Pritzker essentially buys votes, like every other Democrat, by handing out goodies; Cook County outnumbers everyone else; the districts are so gerrymandered the Democrats will be in office forever; and the GOP does nothing except shoot itself in the foot.

Let’s see: The governor bribes voters, Cook County Democrats outnumber the rest of the state, the Democrat legislature gerrymanders the districts, so it’s all the GOP’s fault. I think I see part of your problem.

Read rochf’s comment again: Did not say it’s all the GOP’s fault.

In reality, much of the blame falls on the R’s. They never oppose the marxists in any meaningful way. They are their wingmen.

so (if am understanding this new law correctly) defending myself with lethal force (which in illinois could possibly be considered, at most, second degree murder) then am not obligated to post bail to be released, if unfortunate enough to be charged? correct?

If you happen to be white and your attacker isn’t I wouldn’t bet on benefiting from this law, despite its plain words.

“(if am understanding this new law correctly)”

It means get the hell out of ill in noise if you have any sense at all.

I guess the morons in charge aren’t happy with the crime numbers in Illinois. They would like to see them increase yet more. Watch for more macroaggressions from you know who.

Why is the penalty for second degree murder a racial issue? Leftists telling on themselves again?

I’ve yet to see a persuasive argument from the vile Dumb-o-crats, convincingly articulating a sound and coherent rationale for their Party’s perennial laxity and kid-gloves treatment of criminals. All that they have to proffer is the usual nonsensical demagoguery and claptrap regarding how allegedly “racist” the U.S. criminal justice system is, and, allegations that aggressive policing and prosecutions don’t fit into their so-called “social justice” framework.

Soros victory: terrorize the populace until they submit.

As hard as moving from your state is, get the hell out of Illinois. It’s going to get very bad long before it gets any better.

Just when you see how deep a hole some of these shithole warlords have dug, and comment, “Wow, they’re NEVER gonna be able to build a ladder tall enough to get themselves out of that!”, you discover the folks down at the bottom are busily constructing a power auger.

If European leftists were as stupid as ours are, they would have been adding another story to the Berlin Wall in 1989.

Serious question: Has this type of reform worked anywhere it’s been tried to reduce crime?

To think some in the political talking head class are whispering Pritzker and Newsome as the future of the Dems and running in 2024 for President.

“And if we can’t arrest them and solve people’s problems, we don’t want people to take matters into their own hands,” Briley said.

How any society can let something like this happen … much less require it to happen by design … is simply astounding.