Germany’s DW News: “If approved, the plan would give the European Commission powers to force EU states to reorganize supply chains and prioritize production of key goods during a crisis.” 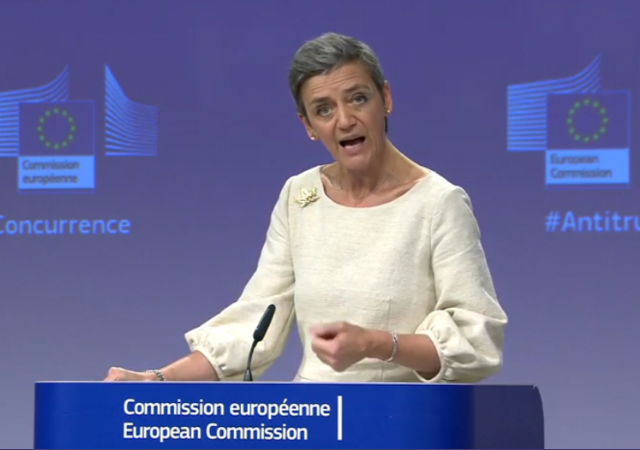 While Europe faces a massive energy crisis and Russia wages war on its eastern flank, the European Union is busy undermining the European nation states and taking more and more power away from the elected European governments.

In the latest bid, the European Commission (EC), the EU’s executive arm, is demanding “emergency powers” to control supply chains across the continent. On Monday, EC’s Executive Vice-President Margrethe Vestager proposed a law that will give Brussels power to override national governments’ desires and control the distribution of “crisis-relevant goods” in times of an “emergency.”

The proposal does not specify what makes a specific product “crisis-relevant” or what constitutes an actual “emergency.” In 2019, the EU parliament declared a “climate emergency,” which led the member states to enact sweeping environmental laws, devastatingly impacting European farmers. After this bill is passed, the EU could use pretexts like Climate Change and mass migration to grab the “means of production” — to use the infamous Marxist phrase.

If approved by the EU parliament, “the plan would give the European Commission powers to force EU states to reorganize supply chains and prioritize production of key goods during a crisis,” the German public broadcaster Deutsche Welle reported Monday.

The proposed EU law reads much like a Stalinist document from the Collectivization-era, setting production targets and ordering unwilling European states to meet the “mandatory” centralized demand (Read below).

The European Commission unveiled a proposal on Monday that would allow Brussels to secure essential products from member states during a crisis.

Under the rules, EU companies could be forced to prioritize the production of key products and stockpile goods or else face fines.

The proposed “Single Market Emergency Instrument” allows the European Commission to order EU states to reorganize supply chains, including expanding or repurposing existing production capacities or setting up new ones, and placing crisis-relevant goods on the market.

The proposal is expected to face intense pushback from businesses and some EU countries, over concerns that the plan amounts to overreach by the European Commission.

The “Single Market Emergency Instrument,” as the proposed law is called, would give EU “Commission far-reaching powers to intervene in the market,” the Belgium-based news website Eurative reported Tuesday.

If passed, the law will give the EU power to enforce “mandatory” production targets on member states that fail to fulfill Brussels’ demands. The Belgium-based EURACTIV reported Tuesday:

Regarding strategic reserves of certain products, the Commission can set recommended targets for each member state. Although these would be voluntary targets, the Commission could make them mandatory for member states that “continuously fall significantly short of the targets,” according to the draft proposal seen by EURACTIV.

According to the Brussels-based news outlet, The EU can penalize companies for non-compliance.

The proposal comes as Europe gears up for a dark and cold winter as Russia closes its pipelines. Brussels has already implemented an EU-wide gas rationing plan, which may not avert the looming crisis. The EU and European governments fear widespread unrest and rioting as people are forced to go without electricity and heating in the middle of the winter.

Mark my words, the EU countries will nationalize industries and utilities. That is their only option or they will all close and people will freeze to death because of their disastrous Green Energy programs.

Then, at some point they will divest and create an entire new class of non-Russian Oligarchs.

But be assured that the ruling elite in Brussels will have enough fuel to heat their homes comfortably, Enough food to fill their bellies. Enough electricity to light their homes. And have all those little luxuries that make life worth living in the 21st Century. But the ordinary citizen? Not so much. They’ll just have to take what they’re given and shut the heII up. It won’t be much under a centralized, bureaucratized economy they are now seeking for the EU – but sacrifices must be made after all.

Maybe they’ll wise up and implement “Brexit” on a mass scale.

Europe did it to themselves. Seriously, how many times did Merkal get re-elected?

I wonder what could possibly go wrong.

Instigate a crisis through poor policy decisions with known consequences and eminently foreseeable results, then ram through a transfer of additional powers to provide the idiots who created the mess more authority. Sounds good to me. /S

The new Iron Curtain is making its appearance. Welcome to the Fourth Reich.

The 1940s EU was just like this version, in that it was German-Controlled, desired to invade and control Britain, and hated Jews aka Israel, these days.

The model is anti price-gouging laws that are all over in the US. The uniform result is empty shelves. With price gouging allowed, you can always buy all you want.

Very entertaining Mike Munger podcast on the economics of it
https://www.econtalk.org/munger-on-price-gouging/

Best hour you’ll even spend on a podcast except perhaps Richard Epstein on the rule of law at the same website.

Back in the days when they had good stuff there.

With price gouging allowed, you can always buy all you want can afford.
FIFY

Which is still more than you can buy without.

I’d rather to be able to buy what I can afford than be able to afford something that isn’t there.

So nations that weren’t idiots, such as France, with its nuclear powerplants, and (I believer) Spain, with lots of gas transfer stations on its coast, will be forced to provide energy “cover” for socialists that make poor choices, like Germany.

Why do I think this will be repeated with Californica and the rest of the nation?

Because it already is. California is living on out of state electricity from Nevada and Washington. And, of course, other people’s water.

And other people’s money, via Federal Taxation.

And have been for decades. The whole Enron debacle was made possible because California won’t build power plants sufficient to their needs.
Their water problems are two fold. 1 they drain their reservoirs to support a minor “species” of minnow. Kind of like spending billions to make sure that mice of a certain shade of brown are around.
and 2 they stopped building the additional 10+ reservoirs they had planned in the 40s-50s.

They have a governmental version of anorexia.

What a wonderful idea!

These people seem to know nothing and learn nothing. A centrally directed does not work and has never worked. Even Lenin had figured that out and so instituted the NEP, but neither Stalin nor Mao ever figured it out. Of course, if their aim is something malevolent then of course they won’t give a hoot about destroying Europe’s economy. As Pasadena Phil pointed out, they instituted the crackpot watermelon idea of a climate emergency, now they’re compounding that drastic error with another even more drastic error. So maybe their aim is malevolent one; and not a benevolent one.

Under this regime, crises will be stacked up back to back.

Will be?? They already are!!

And rightly so, because everything this administration does CAUSES a new crisis.

How many Europeans will starve when the EU is fully in charge of “the means of production”, you think?

All but those in the 70-some-odd EU buildings in Brussels.

Sincerely apologize for this morning’s inadvertent fat-finger down-vote. Please accept instead my 👍👍👍.

EU Seeks “Emergency Powers” Over Europe’s Supply Chains
Of course they do. They think they can control things. They honestly believe that they can, with the right regulations and control they can actually change the world and order it according to their desires. Progressivism in a nutshell.

Also known by another name: insanity

Sorry about the down vote

… Because central planning is so much more efficient than “freedom.”

Lest you sit and think this only affects the EU….

This greatly affects global trade and the US economy. Be ready, everyone.

Don’t dictators come up with any new ideas anymore? I’ve seen this movie.

And when it fails they’ll blame “Kulaks, hoarders and wreckers”. Central planners can’t even come up with new scapegoats.

Why waste the effort? The “Joos” haven’t gone anywhere.

The global ruling elites got a tantalizing taste of nearly unlimited powers under the guise of Covid. They are going to keep coming back to the well as long as they can get away with it.

This is part of the feel good story of the year. Why is everyone so angry? This is Europe.

So after Ukrain rids itself of Russian aggression it can strive to be part of Europe which will be just like the Soviet Union. Lovely.

Once people let a government take emergency powers to curtail freedom during an emergency, then anything and everything afterwards will be classified an emergency.

Supply chain issues? We were told this was a demand issue. Funny that.

They are not wasting this crisis to quicken their “progress” toward one-world socialism.

This is straight out of Atlas Shrugged and the results will be the same. Total destruction of the European Union.

What did anyone think was going to happen when an entire bureaucracy of unelected and unknown people seized power over Europe. I think England got out just in time and I bet it will not be the last after the Denmark fiasco and now this.

This is nothing more than a means to make everybody equally miserable. It means to exert control especially on countries which go against the illustrious and noble global agenda of the central authority. Hungary is one generation since the rendszerváltás, regime change of 1989. I would hope the former Warsaw Pact countries see this EU dream for what it is and spit on it.
And while I am not sorry to see Germany, the country leadership in such a, hmmm, delicious condition it is also it is not correct to tar all of Europe with the same brush. Just as in America, not everyone voted for the miseries currently being imposed by the elected elites.

“Single Market Emergency Instrument,”
Man there is a terrifying phrase and they aren’t even trying to hide it.

If we don’t have a crisis, we must create one so we have an excuse not to let it go to waste!

If you have never watched either “Yes, Minister” or “Yes, Prime Minister,” just be aware that they were 3 to 4 decades ahead of this. Easily the best political show of all time, but I have to admit developing more of a fondness for “The Thick of It.”