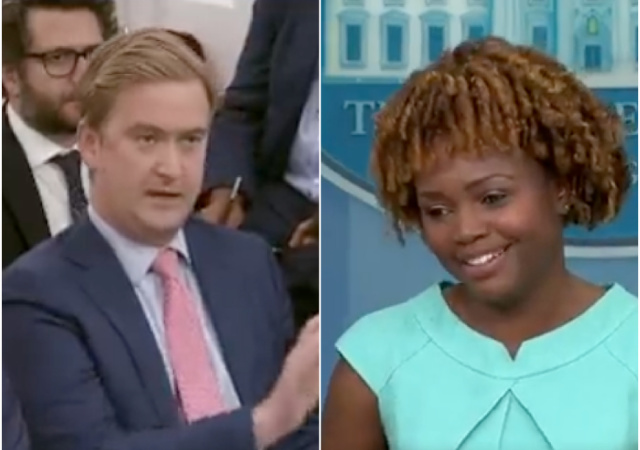 Remember, it’s okay to say Trump stole the 2016 election…along with the 2000 and 2004 elections. Basically any election a Republican wins.

Jean-Pierre said it’s “ridiculous” to compare her denial of the 2016 election results to those who deny the 2020 election.

DOOCY TIME: "A follow up about the MAGA Republican attention. So, if we're all in agreement that it is incorrect to say the 2020 election was stolen, what about the 2016 election?"

KJP: "Look, I'm not going to go back to where we were…We're going to focus on…today." pic.twitter.com/26uBeLDGTS

KJP: “So, let’s be really clear. That comparison that you made is just ridiculous.”

Doocy: “How is that ridiculous?” pic.twitter.com/JDTO1HMO8W

She then argues SHE didn’t then storm the Capitol like on January 6. pic.twitter.com/pm35aCpVzl

KJP defends questioning the 2016 & 2018 elections, telling Doocy she didn’t storm the Capitol like on January 6 where “people died…Law enforcement were attacked…That’s what [Biden] has called out…When you have MAGA Republicans…who…deny…[he’s] going to call that out.” pic.twitter.com/U90mqNCXbS

So now the WH press meetings are about her, not the POTUS. Time to go!

So, in 2022 we’re going to focus on Trump’s 2020 claims, but ignore 2016 where a plurality of Democrats (72% – Rasmussen poll) believed the election was stolen including our ‘luminaries’ in politics and the media:

And a ton more.

If this hideous group plus all MSM outlets didn’t have propaganda and lies, all of them would be laughed out of every venue.

Also remember the D.C. riots just prior to Trump being inaugurated…but that wasn’t an insurrection, even though they were calling for his removal b/c the election was stolen…

Everything’s stolen if it’s not a Dem win…we know this is the M.O. for the IngSoc party in their quest to become the solitary and totalitarian party of the country.

This is where DJT should refine his message/talking points about the 2020 election. Start describing how the d/prog party collaboration with outside money (Zuckbucks), d/prog election officials and d/prog law fare operations were used to set the conditions that allowed the shenanigans.

IMO, using his large megaphone to layout the mechanics of how this occurred would be more productive than ‘I wuz robbed’. Doing so would educate folks who don’t pay as much attention as we do. Follow up with a set of model legislation to preclude a repetition and dive into State legislative races with candidates who have signed on.

He could use some of the war chest to run ads supporting state legislative candidates who signed a pledge as part of a ‘stop the steal’ coalition. Expand that to candidates for Gov, AG and Sec State.

Telling the soup to nuts story that emphasized the wilful lack of compliance with voter roll maintenance requirements, election doc preservation requirements and basic ballot integrity requirements would serve to educate and inform folks as well as blunt the criticism that DJT remains focused on himself re the 2020 election.

“Pa no attention to my past behind the curtain.’

The part she cannot say out loud, but that everyone in the room except Doocy is on board with…

The only elections a one party totalitarian regime in the making recognizes as legitimate are the elections it wins.

And during the transition to one party rule, the elections where fake or controlled opposition wins. To maintain the illusion of a two party system for as long as needed. Something that is no longer needed in places like Chicago.

Regarding J6, there has not been a legitimate investigation into all the violent offenders who facilitated the storming of the Capitol otherwise they might expose the operators and participants who were there specifically to cause violence. Which is something they can’t blame on most J6 people attending the rally. The premeditation to violence may have been organized by people who are not currently locked up for the crime. Repeat of Charlottesville. Introduce violence into the rally to discredit the movement.

Two non-violent Trump supporters that were murdered by Kapitol Keystone Kops, to be precise; two more died from a heart attack and stroke respectively.