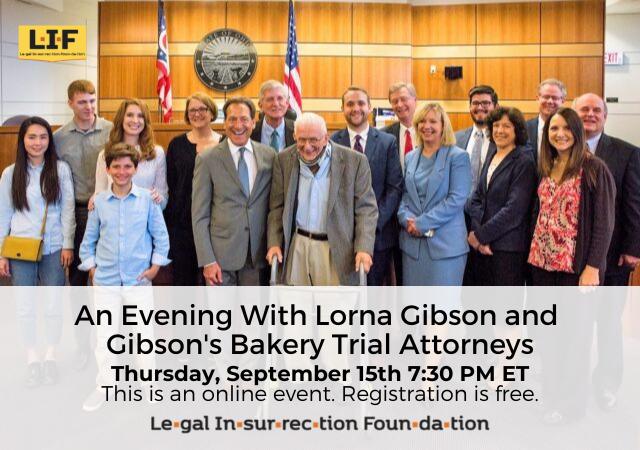 Legal Insurrection led the way on coverage of the Gibson’s Bakery v. Oberlin College case, from the initial November 2016 protests, through the lawsuit proceedings and trial (the only national outlet with a reporter in the courtroom every single trial day), through the first appeal, then through the Ohio Supreme Court refusing to hear the case.

With no other options left and the Gibsons poised to collect on the $36 million surety bond, the college announced it would pay.

Now that the case is over, we are honored to present a live online event on Thursday evening, September 15, starting at 7:30 p.m. Eastern, featuring Lorna Gibson (wife of the late David Gibson) and the Gibson’s Bakery lead trial attorneys, Lee Plakas, Esq. and Owen Rarric, Esq. 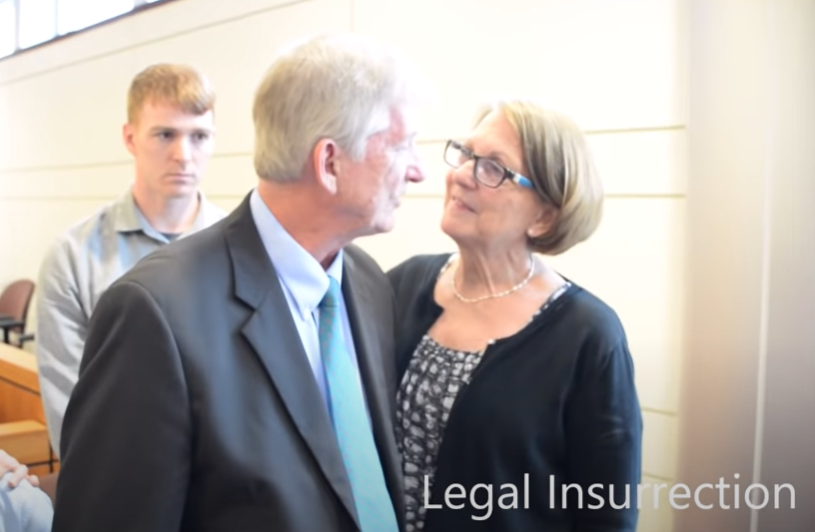 I am so thrilled that Lorna, Lee, and Owen have agreed to this event, so Legal Insurrection readers — who have stood by the bakery — will get to hear directly from those who lived the case. The format will be mostly Question and Answer led by me, but attendees will also be able to submit written questions during the event. (You can also put suggested questions in the comments to this post.)

Registration is limited and required.

REGISTER HERE or below.

The event is free, but voluntary donations are accepted.

Has Oberlin paid, or not? The last word was “they were going to pay”. Have they?

Oberlin College and Conservatory has initiated payment in full of the $36.59 million judgment in the Gibson’s Bakery case and is awaiting payment information from the plaintiffs.

Four questions that come to mind:
RE; President Ambar – “While this outcome is a disappointment, our financial plans for this possibility, which included insurance coverage, mean that this payment will not impact or diminish our academic or student life experience, or require us to draw down Oberlin’s endowment.”
and
“We value our relationship with the City of Oberlin, and we look forward to continuing our support of and partnership with local businesses as we work together to help our city thrive.”

I find it hard to believe no money was required out of the endowment. The total cost for Oberlin, including their legal costs may have been in excess of $45 million. Could they really have had insurance coverage for an amount anything like that?

If there was very substantial insurance coverage, were insurance companies dragging this out for years and it was not as many assumed – that Oberlin was pursuing a scorched earth strategy – Goliath will eventually crush David – and that is was President Ambar and Chairman of the Board of Trustees driving the bus?

With respect to their “community” statement, does Gibson’s have any hope that Oberlin will extend an olive branch or take shoplifitng by students seriously, which can be the difference between a profit and a loss for a small business.

Given the ultimate financial result, do you believe that the institution paid too little attention to fiduciary duty here?

I hope that this will be recorded and available for those who are not available at the time of the call.

I’m in the same boat.

Congratulations to LI for providing excellent coverage and analysis of this case.

LI got a mention over at The Epoch Times: https://www.theepochtimes.com/oberlin-college-finally-pays-family-bakery-36-6-million-in-damages-over-false-racism-accusations_4725952.html

I am hoping that the Legal Insurrection Foundation will become an endowed recipient from some of that award.

I just registered and gave my meager contribution. I will forgo my reg if the event fills up and there is going to be a video. I just wanted to give a little.

What are the Federal tax implications of the settlement? Quick search is “It depends…” actual damages exempt, punitive damages taxable?

All amounts received, including legal fees must be included as income.

The Gibsons should have already hired a tax expert to deal with the lawsuit proceeds, income tax, and estate tax.

The first challenge is who or what entity should report the proceeds. From my review of the trial court’s opinion, there is not an order that shows how the proceeds are to be allocated among the plaintiffs.

(Assuming part of the proceeds are paid to individuals,) Whether an individual can deduct the legal fees is a complex issue. https://www.thetaxadviser.com/issues/2007/oct/treatmentoflegalfeesincurredbyindividuals.html

Really looking forward to this

As with others, I hope LI tapes this for replay, as I now have a conflict, after signing up. I still plan to attend, but would like to know if it will be available later.

Could not be happier for the Gibsons but wondering if this website….focused on legal issues ….will cover one of.the most significant legal actions in our country’s history taking place now of the Biden administration usiing the FBI and sketchy search warrants to take out a political opponent….

…..yah so as I stated. Apparently simply citing a fact gets you down voted here.

Question: I recall reading that Oberlin College had been trying unsuccessfully to purchase buildings owned by Gibson family. Is that true, if so, was that a motivating factor for the college to destroy the family and get the buildings for a cheap price?

I am otherwise occupied at that time but would like to view later if recorded and put up on youtube.