CNBC host to Jared Bernstein: “I’m talking about, if you’re doubling the size of the IRS, then who are they going to go after?” 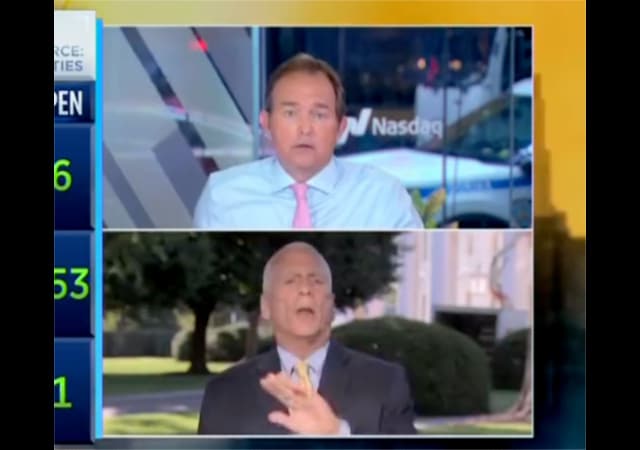 Earlier today, I wrote about the IRS adding over 80,000 agents, making it one of the largest government agencies.

The middle class, especially non-leftists, fear it will open up them to more audits.

Guess how it went! Yeah, Bernstein avoided the question:

“President Biden has always maintained that no one under $400,000 will pay one penny more in taxes, so, line in the sand there,” he said.

Bernstein said the legislation’s proposal to fund an additional $80 billion to the Internal Revenue Service (IRS) will close tax loopholes and avert tax evasion. Sullivan said small businesses will be spending more in taxes due to the bill, to which the economic adviser repeated that taxes will not raise on anyone making less than $400,000 a year.

“So I want to be clear, is the president guaranteeing nobody making under $400,000 will be audited?” Sullivan asked.

“No, no, no, no, that’s not what I said. Nobody under $400,000 will pay higher taxes under the Inflation Reduction Act,” Bernstein said. “Let’s be very clear about that. And look, you talk about small businesses, the minimum corporate tax kicks in at over $1 billion in profits…averaging over the past three years.” (RELATED: ‘Pure, Outright Lie’: Manchin, Harris Faulkner Spar Over Inflation Bill)

“You’re conflating two issues, Jared,” Sullivan interjected. “I’m talking about small businesses that are S corps or family, you know not hedge fund managers. I’m talking about, if you’re doubling the size of the IRS, then who are they going to go after?”

CNBC REPORTER: "Is the president guaranteeing nobody making under $400,000 will be audited."

BIDEN ECONOMIC ADVISOR JARED BERNSTEIN: "No, no, no. no, that's not what I said." pic.twitter.com/NvG3Qlc5lC

A President like, say, DeSantis could have a ball turning a hundred thoisand agents loose on democrat 5OHwhatever3s and businesses employing illegals. That would be a hoot.

He’d have to find enough IRS auditors willing to do the job.

While there are a lot of rich Americans, sometimes billionaire level rich Americans, they always have tax lawyers and bought politicians to protect them. Those below middle class are protected and subsidized by the government. It is the middle class that has the vast bulk of American wealth [maybe 80%], they do not have any of the protections of the rich, and they are considered by those who govern us to be the enemy.

Who the Freep else are they going to target?

Here’s an interesting fact about Bernstein. What do you think his academic qualifications for being WH Economic Advisor? You would think economics, right? Wrong. Social Welfare. Just like LA County Public Health Director Barbara Ferrera. There sure seem to be a lot of Social Welfare majors in key positions these days.

The Demorats absolutely intend to gouge the middle class with this bill. Consider:

“As the lead Republican of the Senate Finance Committee, Crapo offered several commonsense amendments to the Democrats’ social spending spree, none of which were adopted. Crapo’s amendments included:

“Prohibiting the Use of Additional IRS Funding to Audit Taxpayers with Taxable Income Under $400,000: Democrats’ bill included a massive $80 billion in unaccountable funding for the IRS, more than half of which is dedicated to enforcement. This amendment would have prevented the use of additional IRS funds from being used for audits of taxpayers with incomes below $400,000 in order to protect low- and middle-income earning American taxpayers from an onslaught of audits from an army of new IRS auditors funded by an unprecedented, nearly $80 billion, infusion of new funds. While Democrats chose to shirk their professed “intent” and misdirect with stale rhetoric about “tax cheats” and “the rich,” none chose to vote for this amendment which independent analysts have shown would protect middle-class American workers and small businesses from increased taxes resulting from an audit tsunami released by the Democrat-supersized IRS.

“Preventing New IRS Systems to Monitor Taxpayers’ Bank Accounts: The Administration has proposed allowing the IRS to monitor the transactions of deposits and withdrawals of Americans who have more than $10,000 worth of transactions in a year—a pernicious bank-reporting dragnet. While explicit language authorizing the Democrats’ desire to snoop on Americans’ bank transactions was not included in the so-called Inflation Reduction Act, Crapo’s amendment would have prevented the IRS from using funding to construct or operate a system for providing information on and monitoring taxpayer flows of deposits or withdrawals in taxpayers’ private accounts with financial institutions or payment providers in order to protect taxpayer privacy.”

“President Biden has always maintained that no one under $400,000 will pay one penny more in taxes, so, line in the sand there,” he said.

“Okay. Will they be paying more than one penny more in taxes?”

if those 1% who make 400k a year are exempt, then it follows that the 98% of average people are the ones being taxed and audited. One doesn’t have to be an economist to understand that. what is more alarming is that this bill has in it a clause that says there will not be any administrative or judicial oversight. That is scary and should be talked about. read about the IRS not having appeals under this either. makes on question if this is constitutional.

Of course they’re going to target the middle class. They’re certainly not going after the rich who are already lawyered up because they’ll have to fight for it in that case. Much easier to go after the guy who can’t afford a tax attorney because he’ll simply write the check as that’s the cheaper option.

The rich can just expatriate more wealth. Let me tell you how good that is for the economy.

The IRS is to be the new Gestapo to go after dissidents.

Only those who cheat on their taxes should be worried.

Found the dumbass that probably doesn’t pay a cent in taxes or ever do them itself.

Couple this with the raid on Trump’s home and it is easy to see the Dems from Biden to the DOJ on down will go after any enemy. This is a message. What’s next, a night of broken glass?

This is the start of solidifying the IRS as a financial Gestapo, authorized to go after normal Americans (that is, Democrat opponents). It operates like a mob shakedown racket but under color of law. Lois Lerner showed the possibilities of IRS shakedown and successfully crippled opponents of Obama. Prez Dullard’s handlers learned from this and are doubling down.

At least now we know why they needed all of that ammunition.

Karl Marx (April 9, 1863) letter: “Only your small-minded .de philistine who measures world history by the ell [..] regard 20 years as more than a day where major developments of this kind are concerned, though these may be again succeeded by days into which 20 years are compressed.”

Henry George (1879) “Progress and Poverty” : “Private ownership of land is the nether mill-stone. Material progress is the upper mill-stone. Between them, with an increasing pressure, the working classes are being ground.”

JM Keynes (1919) “The Economic Consequences of the Peace” :
“Lenin is said to have declared that the best way to destroy the Capitalist System was to debauch the currency. By a continuing process of inflation, governments can confiscate, secretly and unobserved, an important part of the wealth of their citizens [..] Lenin was certainly right. There is no subtler, no surer means of overturning the existing basis of society than to debauch the currency. The process engages all the hidden forces of economic law on the side of destruction, and does it in a manner which not one man in a million is able to diagnose.”

A second parallel playbook is ostensibly gun control.
Halbrook (2014) “Gun Control in the Third Reich: Disarming the Jews and “Enemies of the State”
https://stephenhalbrook.com/books/gun-control-in-the-third-reich/
and earlier Halbrook (2000) Arizona Journal of International and Comparative Law, No. 3, 483-535 (2000) http://www.stephenhalbrook.com/article-nazilaw.pdf

Disarming political opponents was a categorical imperative of the Nazi .de regime

“In addition to the law & regulations already in place, a secret Gestapo order in 1941 established a system of central registration of persons obtaining firearms other than military officers, police, & political leaders”

Disarming .de Jews April 1933- Nov 1938
March 1933 (2 months into Hitler gov) “confiscation of arms, in particular military firearms was stepped up”
“Having disarmed [..] citizens who were not Nazis [and] prohibited possession of “military” firearms to [non-Nazi] citizens [..] the Nazis now turned their attention more toward the Jews”

“These firearms policies made it far easier to exterminate any opposition, Jews, & unpopular groups.”

A bloated IRS would be expected to quickly show results by generating revenue and penalties. The fastest way is to go for the low hanging fruit – the middle class tax payers who don’t have access to legions of high paid tax lawyers to stymie the IRS.

If you subscribe to and/or gave a donation to a conservative cause or website or bought books authored a conservative, don’t be surprised if the IRS shows up