How about the government stop spending and stop taking my money? 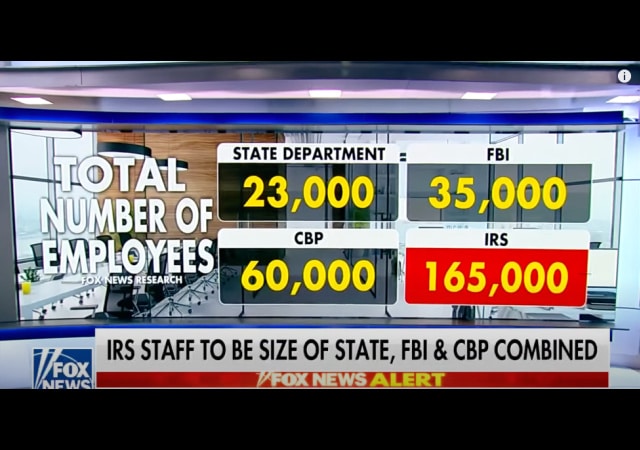 George Washington, Thomas Jefferson, John Adams, and others are rolling in their graves more than ever. Alexander Hamilton probably doesn’t mind the latest news about the IRS.

The Inflation “Reduction” Act does everything but what the name suggests. But it also gives the Internal Revenue Service (IRS) $80 billion to hire 87,000 new agents:

The additional IRS funding is integral to the Democrats’ reconciliation package. A Congressional Budget Office analysis found the hiring of new IRS agents would result in more than $200 billion in additional revenue for the federal government over the next decade. More than half of that funding is specifically earmarked for “enforcement,” meaning tax audits and other responsibilities such as “digital asset monitoring.”

The IRS already has 78,661 full-time employees. The IRS is already one of the largest government agencies, but now it will be untouchable:

The middle class will fall victim to the regime, not the rich the Democrats claim to hate:

The majority of new revenue from IRS audits and scrutiny will come from those making less than $200,000 a year, according to a study from the nonpartisan Joint Committee on Taxation. The committee found that just 4 to 9 percent of money raised will come from those making more than $500,000, contrary to Democrats’ claims that new IRS agents are necessary to target millionaires and billionaires who hide income.

Dems' bill contains no protections for the middle-class from new barrage of IRS audits.

“Every retailer in the US who cares about their hard-hit customers should be fighting to block this unnecessary harassment of hard-working Americans.” –@RepKevinBradyhttps://t.co/qgxklR9G3T

Do you know how you get millionaires and billionaires to pay taxes? You overhaul the tax code. They have great accountants who can find all the reductions and write-offs. There’s no such thing as tax “loopholes.” It’s all right there in the tax code.

The Democrats know they can do and say anything they want because the mainstream media will not challenge them. The talking points will gain steam, and by the time the truth comes out, no one cares.

"Can you understand how 87,000 new IRS agents would scare the heck out of millions of Americans?"

Democrat Sen. Ben Cardin: "If there's no reason to be fearful, and if you paid your taxes and if you complied with our laws, you should want to make sure everyone else does that." pic.twitter.com/xRwSes2CrC

Stacey wrote about an IRS-licensed enrolled agent with some of the same thoughts as Cardin.

Excuse me? I guess we don’t need the 4th or 5th amendment? There’s a reason why no matter what, you always have a lawyer with you when you speak to the police. It annoys me when I see people on crime shows without lawyers.

Because we all know authority won’t twist and turn your words and actions to fit their needs and wants, right? We’ve never seen that happen.

Also, why would non-leftists fear the IRS?

Their goal is to go after law abiding citizens while ignoring illegals who don’t pay a penny of tax..

No, that’s the smoke screened red herring they are hoping you pursue.

Only a liberal would believe this is anything but a NEW liberal brute squad.

Not liberal, but Leftist.

It can be cathartic to bitch about the latest obscene expansion of the Federal government but the cold, hard reality is that this bill, the semiconductor boondoggle and everything else brought to us by this administration was enabled by Donald Trump. He made the period between the 2020 general election and the GA Senate runoffs all about himself when he should have focused his attention on the GA Senates races to preserve all the good work he did the prior 4 years.

Instead of gridlock we have 2 years of socialist legislation which will leave a lasting mark on our country and we may never be able to undo.

The GA Senate runoffs were cheated, just like the general election was. Sadly, our R leadership in the free state of georgia neglected their duties. They should have thrown out all ballots from precincts that didn’t allow bipartisan observers in, and they should have had strict validity checking on mail-in ballots.

Recovering from this will mean the complete destruction of the Democrat machine. We need a third party to replace them.

And this will “Reduce Inflation”?

Leftist has such a clever way of perverting the English language. They call themselves “liberal” and “progressive” when they are the exact opposite. Now they’ve come up with a three-quarter of a trillion dollar spending bill that they call an “Inflation Reduction Act.” How stupid do they think we are?

They’ve been answering that question for over 200 years.

Evidently, just as stupid as “we” are, since they haven’t yet been stopped.
And the only proper stop does NOT include “voting harder”.

Straight from the Marxist playbook- see tis for what it is and not the red herrings the media ( and the GOPe/RINO) is throwing out there.

This is a 4 prong attack.

That coupled with inflation and finally attacking the “barter market” ( the underground economy where money transfers in the middle but never gets out of that. The goal is to pull that out thus imploding the middle class.

This ( above all else) is the most dangerous and evil thing they have done and is deliberate in the Cloward-Piven model.

We MUST stop this before it delivers its intended goals.

Tree of liberty is dying of thirst

That right there is a good reason to abolish it altogether.
Also to repeal the 17th Amendment.

if you paid your taxes and if you complied with our laws (emphasis added)
Yeah, about that Internal Revenue Code that stretches for how many reams of paper? And all of us that can’t afford CPAs to go over our taxes every year….

Roughly 75 reams of paper, if printed double-sided. Over nine standard boxes of printer paper, and Cthulhu knows how many ink cartridges.

But if we don’t comply with that it’s somehow OUR fault.

Maybe it is time for Atlas to Shrug.

87,000 new IRS apparatchiks and not a single one of them will be focused on delivering improved customer service to the taxpayers who are paying their salaries. Just a massive expansion of the federal bureaucracy and the
indefensible expansion ofone of the most abusive and unaccountable agencies, courtesy of the vile Dumb-o-crats.

I’m still waiting for my 2020 amended return refund. The IRS had the gall to send me a note that they needed 60 more days after already having over 400 days.

Three IRS agents in an afternoon could find millions of dollars that Hunter and Joe have illegally hidden from taxation. Instead, we’ll hire 87k women’s studies majors, and give them lifetime employment.

I sympathize. I had filed a paper return for year 2020’s return and in 2021 I received a form CP80 notice, indicating that the agency had cashed my check for taxes owed (which check was included with the return), but, claiming that they hadn’t received my return. After calling the IRS and waiting one hour on hold before getting a representative, I learned that these idiots had a huge backlog of unprocessed paper returns. They cash the checks, but, had the gall to send out notices to taxpayers claiming that the returns hadn’t been received, even though the agency was well aware of the backlog issue.

Expect more of, and, worse conduct than described above, in the future, from these lawless and obnoxious bureaucrats.

We don’t spend enough time on this quote from the Declaration of Independence.

Almost as big as the Marine Corps.

I surprised some anonymous group hasn’t taken out the IRS by destroying their computer systems. I don’t mean knock them out for a while, I mean ERASE every bit of info they have, including any backup systems. If they were serious, that is.

When the Republicans win Congress in the midterm election, one of the several concerns is to downsize the Regulatory Agencies that are a major budget expense and nothing but a large, bloated Government that is not needed.