“Campuses do not consistently achieve an atmosphere that promotes free expression.” 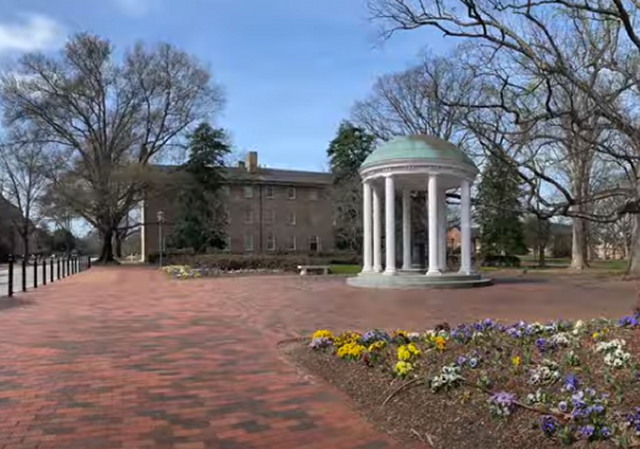 Free speech continues to be an issue on college campuses, particularly for conservative students.

A new study from the University of North Carolina has some troubling findings.

Why should American taxpayers be on the hook for a student loan bailout when so many students fear they can’t even speak freely on campus?

Professor Jonathan Turley shared this on his blog:

With the start of classes at George Washington Law School, I have already had visits to my office of conservative and libertarian students asking if I thought they could speak freely in other classes without being penalized by professors. Despite teaching for decades, it is a question that I never heard from students until the last few years. It is now routine…

Polls have shown that sixty-five (65) percent agreed that people on campus today are prevented from speaking freely and an earlier poll at the University of North Carolina found that conservative students are 300 times more likely to self-censor themselves due to the intolerance of opposing views on our campuses.

This study was conducted under a grant from the university by political scientists Timothy Ryan and Andrew Engelhardt of the University of North Carolina, political scientist Jennifer Larson of Vanderbilt, and business scholar Mark McNeilly. The UNC surveyed students from eight UNC institutions and found the same sharp contrast.

This part of the study jumped out at me:

Finding 2: Campuses do not consistently achieve an atmosphere that promotes free expression.

Even if university faculty generally have an inclusive posture toward expression issues—as Finding 1 suggests to be the case for the UNC System schools studied—it does not necessarily follow that a culture that promotes free expression has been achieved. This divergence was a theme in our previous report. Across several metrics, we found that students were concerned about expressing their views. Their concerns seemed to focus contra some caricatures of university culture—less on faculty than on their own peers.

Professor Turley recently published a related article in the Harvard Journal of Law and Public Policy. Here is an excerpt:

Harm and Hegemony: The Decline of Free Speech in the United States

Throughout its history, the United States has struggled with movements that aim to silence others through state or private action. These periods have been pendulous, with acute suppression followed by relative tolerance for free speech. This boom–or-bust pattern for free speech may well continue. However, the United States is arguably living through one of its most serious anti-free speech periods, and there are signs that the current period could result in lasting damage for free speech due to a rising orthodoxy and intolerance on our campuses and in our public debate. Where fighting for freedom of speech was once a near-universal rallying cry, opposing free speech has now become an article of faith for some in our society. This has led to a rising movement that justifies silencing opposing views, often on the grounds that stopping others from speaking is, in fact, an exercise in free speech. This movement has both public and private components, but it is different from any prior period due to new technological, political, and economic pressures on the exercise of free speech.

UNC may be a college where some conservative students may not feel free to express themselves, but that hardly makes it a Gulag. I implore you to read One Day in the Life of Ivan Denisovich by Aleksandr Solzhenitsyn. For you to equate the two is ridiculous.

Friend, I have two volumes written by him. My put down of ‘Carrboro College’ was tongue in cheek as those of us non Alumnae tend to do.

Well, it could be worse, there are real gulags in Durham and Raleigh.

Aside from some protected working positions, you get real-name candor mostly from retired people.

No kidding. That is daily life in hostile territory.

Alumni of UNC-CH from the early 80s. This anti-free speech movement had its roots in Chapel Hill and Duke 40 years ago. UNC even canceled the weekly conservative student newspaper, The Phoenix, for harmful speech in 1984.

The passing of Gorbachev reminds me that their was war against Communism. However as America is prone to do, we forgot this was a two front war. Communism was also spreading here and it or its cousin now controls most of academia and other institutions. We focused on the Russians but forgot about Democrats here.

So McCarthy was right, but didn’t do enough.

He did all he could, but when a inquisition begins its hard to reign one in. The day comes when it is is own enemy. Communism has and had a lot of appeal to certain groups of people all the way from upper level professionals of every persuasion, to rag tag street level poor looking for meal tickets and those who want to use them as cannon fodder for ‘The Cause’.

As a student at UNC in the early 90s, I wrote a letter to the editor of the Daily Tar Heel/i> regarding the pay of dorm housekeepers. One morning when I was in class, about 30 of them showed up at my dorm room and caused a ruckus. My suitemates were afraid to leave their rooms.

Sharing differing opinions has long been an issue there.

As do conservatives who live in places like Chicago and other deep blue metro areas.

And yet the Neanderthal conservatives are supposed to be the threat. One quibble with this: Liberal is the correct terminology for somebody who believes in free speech. These supposed ‘liberals’ are more than happy to persecute anybody who diverges from the narrative, both with words and physical violence. We generally call these intolerant thugs ‘leftists’

I expect it’s same at other colleges so thank you UNC for telling the truth. That doesn’t make me a tar heel fan.

My son graduated in 2011 and had to hide his membership in the republican club as did the entire club.

This is not new in NC. The Gov and state AG are big-time woke. NC’s senators, Tillis and Burr, are worse than useless. NC is trying to become NY or NJ. Very unfortunate.

Ain’t it sad that in the states of North and South Carolina we get Tillis, Burr, Graham, and Scott. Every one a republican, a marxist, and every one is corrupt IMO.

A few facts that should be known about Carolina:

1) Still rated “green” for free speech by FIRE, the only organization monitoring speech issues on our campus’s

2) UNC is required by state law to take in no more than 22% of the freshmen class from out of state, the only public NC school with such requirements

6) The faculty is leftis clearly, but the student body much less so

Anyone that keeps quite is part of the problem. Speak up, and defend yourself, those on your side, and those that also support free speech. I was failed in a class (early 70’s) by a marxist minded professor because I vehemently disagreed with him. My scholarship in the class was excellent however. I appealed to the administration and my grade was eventually changed to an “A”.
Do not back down. Don’t be the girl getting beat by a boy in a girls swim meet, afraid to complain. Speak loudly and carry a big stick.