From a report released in May: “In service of this goal, survivors and others who reported abuse were ignored, disbelieved, or met with the constant refrain that the SBC could take no action due to its polity regarding church autonomy…” 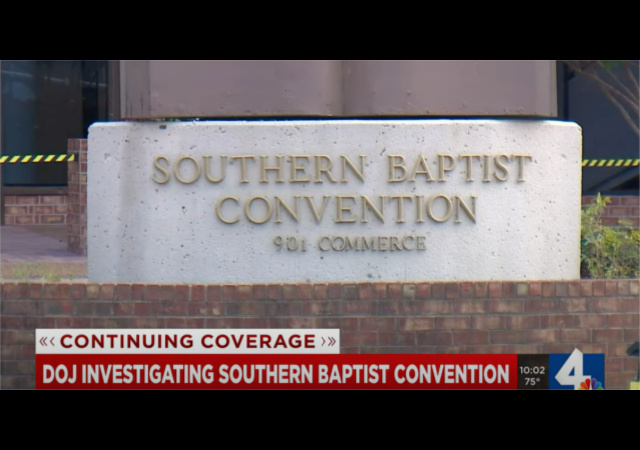 When a Catholic priest is accused of sexual abuse, it makes headlines.

The accusations against the Southern Baptist Convention (SBC) barely made a blip on the radar. I planned on covering it but got overloaded. No excuse, though, for the MSM, which has more people.

Anyway, the SBC admitted the DOJ is investigating it but did not provide details. The emails hinted the investigation is aimed at the sexual abuse accusations:

The SBC Executive Committee recently became aware that the Department of Justice has initiated an investigation into the Southern Baptist Convention, and that the investigation will include multiple SBC entities.

Individually and collectively each SBC entity is resolved to fully and completely cooperate with the investigation. While we continue to griece and lament past mistakes related to sexual abuse, current leaders across the SBC have demonstrated a firm conviction to address those issues of the past and are implementing measures to ensure they are never repeated in the future. The fact that the SBC Executive Committee recently completed a fully transparent investigation is evidence of this committment.

A statement from SBC entity leaders and SBC president @bartbarber on the initiation of an investigation by the @TheJusticeDept. pic.twitter.com/yIopOScCAz

The allegations first surfaced in 2019 after a six-month investigation:

A bombshell investigation by the Houston Chronicle and the San Antonio Express-News found that over the last 20 years, about 380 Southern Baptist church leaders and volunteers have faced credible accusations of sexual misconduct. Of those, roughly 220 were convicted of sex crimes or received plea deals, in cases involving more than 700 victims in all, the report found. Many accusers were young men and women, who allegedly experienced everything from exposure to pornography to rape and impregnation at the hands of church members.

The newspapers reported that the Southern Baptist Convention (SBC) largely treated the accusations as isolated issues, and took on an “out of sight, out of mind” mentality, even amid growing pressures to create a registry so the accusations wouldn’t disappear as alleged perpetrators moved from city to city. The Chronicle and Express-News created a database of convicted sexual abusers with documented connections to the SBC.

The investigation took over six months and involved the cross-examination of hundreds of allegations corroborated by court documents and prison records. The results were startling and reiterated how allegations of sexual misconduct aren’t limited to just the Catholic church.

In May, Guidepost Solutions revealed in its report that the SBC kept a list of the accusers but ignored the survivors:

The seven-month investigation was conducted by Guidepost Solutions, an independent firm contracted by the Executive Committee after delegates to last year’s national meeting pressed for a probe by outsiders.

“Our investigation revealed that, for many years, a few senior EC leaders, along with outside counsel, largely controlled the EC’s response to these reports of abuse … and were singularly focused on avoiding liability for the SBC,” the report said.

“In service of this goal, survivors and others who reported abuse were ignored, disbelieved, or met with the constant refrain that the SBC could take no action due to its polity regarding church autonomy – even if it meant that convicted molesters continued in ministry with no notice or warning to their current church or congregation,” the report added.

The report asserts that an Executive Committee staffer maintained a list of Baptist ministers accused of abuse, but there is no indication anyone “took any action to ensure that the accused ministers were no longer in positions of power at SBC churches.”

The SBC released the list five days after Guidepost Solutions published its report.

In June, thousands voted “to create a way to track pastors and other church workers credibly accused of sex abuse, and launch a new task force to oversee further reforms” during the annual SBC convention:

The vote fell short of what some survivors of abuse in Southern Baptist churches sought, such as a compensation fund for victims and a more robust and independent commission to monitor its churches’ handling — and mishandling— of abuse. And it also met opposition from some who contended the crisis was overhyped and that it interfered with Baptist churches’ independence.

But Bruce Frank, who led the task force that recommended the reforms, made an emotional plea for church representatives to accept them as they gathered here at the start of their two-day annual meeting. He called the steps the “bare minimum.”

“It will take a few years to change the culture and direction,” he said. “But without action to act differently, there is no repentance.”

He challenged those who would say these steps interfere with Baptists’ focus on missions, saying that “protecting the sheep from the wolves” is essential to mission.

Here we go…
Christians are a blight to be judged by a transvestite.

Why would it take a “few years” to change the culture?

No one should be in any posts that abuses anyone. End of story

due to its polity
Sic?

allegations of sexual misconduct aren’t limited to just the Catholic church
Only a low information voter ever believed that.
Also, the Progressive church is FULL of them. They are encouraged there.

This is a problem in the world. Period. Sin abounds, and flourishes where it’s kept in the dark. It is one reason we are supposed to be a light to the world.

But I understand the SBC position: they are NOT a Vatican for the Southern Baptists. They do not rule them, and are not really responsible for oversight of them. They are individual congregations. However, as an enabling organization, they really need to be a little more involved.

I’m going to say, though, that the people demanding what amounts to reparations from the umbrella organization…. Well, that doesn’t sound right to me.

Just for information purposes….
A difference between, say, SBC and the Lutheran Church Missouri Synod (LCMS) is that the SBC does not handle the approval of Baptist ministers, while the LCMS does. The LCMS churches must have their pastors from approved seminaries and go through “call processes” from the churches that meet certain requirements.

What this means is that the LCMS can basically kick a pastor to the curb by removing him from the process. I think the Southern Baptist process is entirely local.

Graduated from an SBC seminary, so I know a little about the broader issues with SBC vs say Roman Catholic church.

The SBC is not a denomination in the same way as Lutherans, Roman Catholics or Prebsytyrians are. All Baptist Churches are self governed, the convention has zero control over them. The most the convention can due is refuse their funding for the Cooperative Program (means by which SBC affiliated churches donate to missions by pooling resources and funding a the North American Missions Board and International Mission Board, among other things like the Seminaries), and declining to allow the church to vote in the convention. That’s it, there’s no other control.

Membership itself is voluntary, a church can leave it at any time. Pastors are not approved by the convention. It’s just a way to pool resources. They make headlines for doctrinal statements (think 2000 SBC Baptist Faith and Message), but that’s the convention saying “We have agreed to this as a body” but no church has to adhere to it (and some don’t). The only way doctrinal statements are enforced is on staff of the SBC, as they are agreeing by taking the money from all these churches they’ll adhere to those standards.

So, going back to the story, what this implies is that the issues are likely in a) the convention itself or b) one of the organizations in runs (Lifeway, the Seminaries, IMB, NAMB, etc). This will be a major scandal, as SBC churches tend to be very conservative and hold their leaders to high standards, as a general thing, specific churches may be softer or tend to sweep things other due to issues mentioned above. As one example, I know of a church that asked a pastor to resign because he failed to quit smoking when they asked him to. I know another that was removed because he divorced his wife and became engaged to another woman. While they tend to be skeptical of random rumors, SB churches will be VERY upset by this, and there will be blood if it is proven SBC leadership is covering up sexual abuse.

Entirely true, every word of it. Thank you.

It’s easy to tell who is ignorant of polity in churches. Trying to explain the differences among episcopal, presbyterian, and single/multiple elder styles of church governance can have the effect of a deer-in-the-headlights response.

For those interested, I suggest a Zondervan Publication, “Who Runs The Church?: 4 Views On Church Government”, available as a real book or a Kindle download.
.

People naturally gravitate to social and business activities that they enjoy. Pedophiles are no different. While pedophiles comprise much less than 1% of the population ( 1/100 of 1% or less). There is a high level of pedophiles gravitating to activities that provide interaction with youth.

It was/is estimated that approximately 5% of catholic priests are pedophiles (priests were simply recirculated to other catholic churches which gave a much worse appearance – which was already very bad). Yet at the same time, the protestant churches had an estimated 4% of pastor/youth ministers were pedophiles with somewhat similar %’s with the ymca, BSA, GSA, etc.

I am certainly not condoning that activity, just attempting to bring some context.

As much fun as it is to dunk on my Baptist brothers, I am looking for the specific thing people think the SBC should do. Are they to keep an “accused but not convicted” list?

Where, exactly, have they failed?

Their failure is they aren’t leftists; public schools have much worst records on these issues than the SBC.

The SBC actually has allowed/promoted quite a bit of leftist bullshit in their seminary. They aren’t gone yet, but the leadership is definitely going. Or, at least it was a few years ago.

No one is immune from sin:

“If the Lord had not cut short those days, no one would survive. But for the sake of the elect, whom he has chosen, he has shortened them.” – Mark 13:20

Do you really believe the media want to protect the SBC?

They hate anybody remotely “Christian” in their eyes.