Some Families in Portland, OR, Selling Their Homes to Escape Homeless Encampments

Some Families in Portland, OR, Selling Their Homes to Escape Homeless Encampments 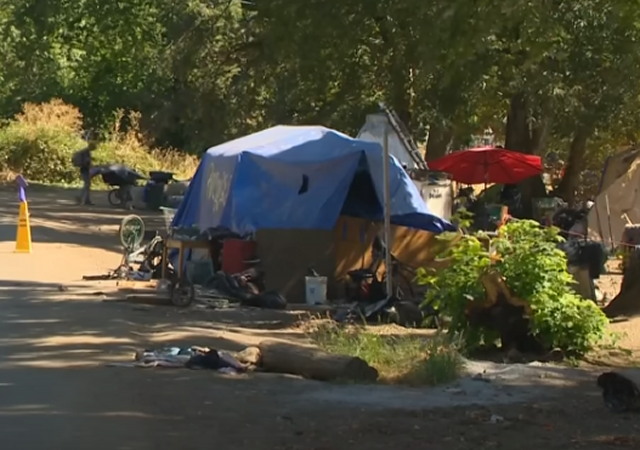 Some people in Portland, Oregon, are so desperate to escape homeless tent communities that they sell their homes.

Imagine paying property taxes on the house you have considered home for years and being pushed to this point.

Residents in a Portland, Oregon, neighborhood are resorting to selling their homes and moving due to homeless encampments right outside their front doors.

“It’s a little scary because I know there is mental illness and that concerns me,” North Portland resident Maria Inocencio told KGW8.

Residents of North Portland said at least three families on one street have left in recent days due to the homeless camps, and KGW8 reported seeing for-sale signs up and down streets.

“I would say the migration to the suburbs, I’ve seen quite a bit in the last two years,” real estate broker Lauren Iaquinta said. “Most people don’t want to have to worry about if they can leave their car parked in their driveway overnight without maybe having it broken into. It’s a pretty testy subject.”

Iaquinta said she now studies neighborhoods to see if there are homeless camps in a given area while working with potential buyers.

Here’s more from the KGW report:

“It makes you not feel that great about living here,” said Greg Dilkes, who has lived in North Portland for 30 years. “It makes living in the neighborhood harder, not as congenial as it could be.”…

“It’s the first time in a long time that we’ve actually seriously thought about moving,” he said.

“Mental health, drug addiction and just not having access to housing,” added Mark Smith, who shares a backyard with the camp.

Smith said he and his partner often don’t feel safe walking alone or tending to their gardens. “Every day if you go from one end of the street to the other, you’re confronting some very difficult situations, people in really dire straits.”…

North Portland neighbors told KGW at least three families along McKenna Avenue are leaving due to nearby homeless camps.

Watch the video report below:

Portland is a famously progressive community. Why is anyone living in a tent on the street?

Capitalism creates wealth. Socialism creates poverty. This is a perfect example for how that works in the real world and right in our faces.

And now our government is preparing use the and armed IRS to seize our wealth so the geniuses in Congress can redistribute it according to “equity”.

Redistributing wealth is not progress. It’s making everyone poor and billions of people around the world are about to die if we don’t stop this soon.

Redistributing wealth is not democratic. Most people will not survive the transition.

BUT, BUT…the new and improved Lefty can do it right…this time…because they’re smarter than all those who came before.

Obvious abject failure is not a deterrent for these types.

Why do you think that “isn’t” the plan? These are the same people who have been hyperventilating about overpopulation, after all….

China or Blackrock. They buy up enough properties they can raze whole areas and rebuild with commercial buildings.

The left will call them vulture buyers. The rest of us will see them following the age-old principle of buying low with the hope of selling at a higher price. These people should be seen as optimists since they are reasoning that things will at some point turn around. Then again, this is Portland and the left is firmly in control.

Things will definitely turn around if they are able to raze the whole area and build something new that doesn’t leave room for a homeless camp to pop up.

Blackrock for one. China for another. Masters of the Universe. You will own nothing and be happy.

We are being eaten alive by a snake that was nurtured by the left.
Let us pray the snake finds its tail soon.

Turns out that liberals really don’t like living with the eventual consequences of years of liberalism.

But they always pack it in their bags when they leave…

Not liberalism, but Leftism, unless you consider liberal to let people have the liberty of sleeping in the street and harassing you.

I guess permissive might be more correct than liberal.

And move on like locusts to ravage another area with their failed progressive policies.

“Portland is a famously progressive community. Why is anyone living in a tent on the street?”

That is the eternal question: why are leftist controlled “utopias” filled with crime, homelessness, drugs, riots etc.?

Answer: because that is what they have planned for the whole country. Socialism/communism only results in third world sheeite holes, economic collapse and shortages.

Biden is just shepherding us along like the demented Pied Piper of socialism.

This is NOT a homelessness problem! This is a leadership problem!

True about the lack of effective leadership. False about being homeless. The overwhelming majority of these folks made a decision to become nomadic as a part of their lifestyle choices. We must stop coddling them. Society has established rules for all of us to follow. There are public and private areas which are designed to accommodate nomads; campgrounds. Anyone pitching a tent outside of those designated areas needs to pushed out. Period.

Allowing people to behave in a lawless manner with no consequence negates the law, the legislative acts and the will of the people. More dangerously it undercuts the willingness of the remainder of the population to adhere to you system of laws. Sooner or later others will decide to ignore the laws they disagree with and when it happens I don’t want to hear a peep from those who choose to coddle current criminals. The rule of law is an either/or proposition and no amount of hand wringing and claims of ‘but that’s different’ will change this. May our political leaders always choose wisely with the long-term in mind.

The overwhelming majority of the homeless have severe mental health/drug addiction problems. It is a debatable point whether those are the same thing, but even if you disagree, the severely mentally ill cannot be committing crimes as by definition they are non compos mentis</I..

The real issue is de-institutionalization. We've already seen what happens when law enforcement agencies become politicized, and we have 20th century history of oppressive regimes declaring anyone who failed to Believe in the Revolution mentally ill. Allowing the government to declare people mentally ill so they can be institutionalized against their will is a very slippery slope, as is incarcerating people for invented or trivial crimes because they offend the regime.

TL;DR: this is a problem with no good, simple solution, only less bad ones.

Where a person has been diagnosed as lacking the capacity to understand their actions you may be correct. Assuming that every junkie or mentally ill person is automatically given a pass is incorrect. You have to prove it. Even then a diagnosis doesn’t automatically preclude competence. That is a separate issue.

Not even close. You skipped over the logical inference here. Homeless Cray Cray addicts therefore must be locked the hell up away from the rest of society because of their inability to distinguish right and wrong makes them too dangerous to remain free.

I am happy to reopen the asylums and install these folks you claim are so dangerous. How about you?

Weaponized Governmental Failure. The deliberate act of failing to perform the basic functions of government services while still getting paid.

There are consequences to the asinine mentality that can’t its own face in the mirror…like this one who is so tone deaf she borders on stupid:

“It’s a little scary because I know there is mental illness and that concerns me,” (North Portland resident Maria Inocencio)

You get what you voted into office…which has defiled everything it touches and doesn’t care about YOU, only their symbolism over substance while spending your money to filch your own freedoms and livelihoods right out from under you. Tough darts…live with your decisions.

This guy’s statements aren’t rational or fair. Sure, many homeless folks are perfectly harmless, but, there are many others who suffer from drug addiction and/or untreated mental illness. To cast residents’ concerns about violent crime and property crimes resulting from the presence of large concentrations of homeless people as allegedly unfounded or illegitimate, is simply foolish.

“… so if we lived in four walls and a house and stuff would you still be scared of us?”

Likely not, because then you would be less likely to be destitute and dangerous. You would also be paying or contributing towards taxes to offset all those services you consume. Having nothing to lose also implies you have nothing to pay your bills and makes you a drain on society – there is no free lunch.

If you wanted to live free of encumbrances you could be sitting in a remote forest somewhere, but you chose to trespass in town and squat instead.

And shitting on the streets, urinating like a dog on their lawns

What’s not to be afraid of?

Exactly. And is it really unfair of me to think that people of able mind and body who contribute nothing should get nothing? I have compassion for the truly disabled, and the mentally I’ll should, in all honesty, be institutionalized. Hard working committed people should not have to redistribute their wealth to those who don’t contribute their fair share.

Sanitation. Even harmless people require it.

Let us know who they are, so we can make sure nobody hear us sells to them.

Given your voting record, you have the balls to criticize someone else’s sanity?

“Portlandia” — from sketch comedy to horror

Just to the north… Except for Herrera Butthead NeverTrump losing in the primary—barely—–WASHINGTON STATE – voted exactly the same way they always do in the primaries.

I’ve started to cheer for the criminals to tear these states apart at this point.

It’s not published widely but Washington has multiple cops on trial for doing their jobs. Seriously I’m rooting for the criminals to tear this place to shreds. YOU VOTED FOR THIS!!!!!!!

And of course the government counters with “affordable housing”

“A Cabrini-Green in every pot!”

This problem isn’t an accident, it’s another mechanism to destabilize society to the benefit of those who seek to expand their power in the chaos, over the rest of us. Make it so bad we’ll accept whatever authoritarian solution they offer as long as it fixes the immediate problem. Road to Serfdom. Much like the ‘defund the cops’ movement is intended to create a pretext for federaly run local law enforcement. The new committee for state security.