Restaurants are limiting order sizes and wholesalers are rationing cases. 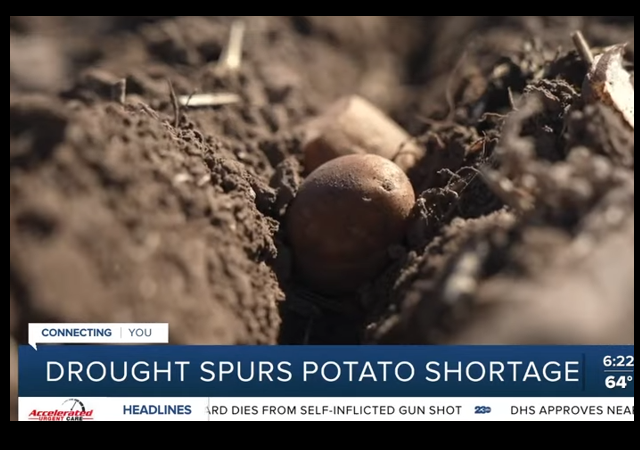 It’s hard to imagine a food item that is more of a staple in the American diet than the potato.

Unfortunately, I have to add potatoes to the list of items experiencing shortage issues.

If you haven’t heard about it already or noticed fewer and fewer potatoes in your grocery store’s produce section, you will soon.

So, what’s the problem? The weather. Not this year’s weather, mind you. It’s the weather from over a year ago that’s to blame.

“I’m not sure if you remember last June, but we had some just unbelievably hot temperatures here in Idaho. It did a number on our potato crop,” said Jamey Higham, president and CEO of the Idaho Potato Commission. “And so, our yields were significantly down last year.”

Now, keep that in mind when you learn that a previous year’s potato crop cycle is supposed to last through the following August. And before the 2022 harvest comes into the pipeline (it’s just now beginning), consumers are facing the shortage from last year’s crop.

”There is not a gap. There are just less potatoes being shipped right now than there normally are this time of year because of the shorter supply that we started the season with,” said Higham.

The effects are being felt across the country. One restaurant in Michigan is no longer offering large orders of fries.

Hamburger Mikey in Muskegon has had to take another look at their award-winning French fries. For the time being, they’ve taken away the large portion, and are now just offering a half pound, which feeds one to three people.

The beloved burger joint gets their potatoes in 50 pound boxes from two distributors out of Idaho, totaling up to 800 pounds of potatoes every week.

“Potatoes are a huge portion of our sales,” said Tim Taylor, the Managing Partner for Hamburger Mikey. “Since 2016 we’ve used 240,000 pounds of potatoes.”

The shortage in Idaho is causing higher prices for Hamburger Mikey by up to 50%.

Fry prices also did have to go up a just a little bit at the popular burger joint, but Taylor said not by much.

“We have families that come in that maybe can’t afford a lot, and they do need those potatoes for their family, and we still want to be able to offer that,” he said.

The national shortage has prompted massive price spikes and rationing among some wholesalers. New York has limits on how many potatoes people can buy at once.

Spud sparseness became evident to purveyors shopping the Hunts Point produce market in the Bronx in the wee hours of Monday morning. By Wednesday, restaurateurs hitting up Restaurant Depot in the West Plainfield, N.J. store faced advisements on limits.

One note to potential hoarders read, “Due to extreme supply shortages of product we are temporarily limiting purchases to a 3 case limit.”

Christopher Maloney of Paratrooper Produce in Tottenville gave chefs a heads up on the issue last week so as to plan accordingly with specials. By early Monday morning, Maloney had scoured the New York Terminal Market in the Bronx for product and turned up nothing — not even specimens known as “Number 2s.” That term applies to ungraded potatoes packed in varying sizes — large and small packed together — typically cooked into hash browns.

“I spent hours looking for potatoes, negotiating on all sizes and all counts. Now a 90-count potato is almost $60 delivered. It should be $20 to $25 max,” said the fruit and veggie monger.

It’s good that I had my fill of potatoes in Europe and am on a diet. However, this is a troubling development for families who often rely on potatoes as a staple of their meals.

For nation shall rise against nation, and kingdom against kingdom: and there shall be famines, and pestilences, and earthquakes, in divers places.

Why don’t they just put a bullet to our heads? It’d be quicker, easier, and cheaper than killing everyone with clot shots, food shortages, pestilence, and riots.

They are betting on the statistics that show that the overwhelming cause of death from guns is suicide.

That’s odd, they always count firearm suicides in the homicide count when railing against the “easy availability of guns, even buying them over the internet.”

What’s odd about that?

When they talk about gun violence I think about one person performing violence upon another. When people fear gun violence I think that is the image everyone has. A robbery. An assault. A home invasion. But somewhere between 2/3 – 3/4 of gun deaths in this country is from suicide. The fear of gun violence is however the fear of someone forcing his will upon you. Not suicide. So if you take suicide out of it, gun violence drops precipitously. The majority of the remainder of gun deaths are criminal vs criminal – gangs, drugs, similar. It is a relatively small number of gun violence that is what people actually fear – a violent criminal shooting an innocent person.

Plus one.
If you want to kill me, tell me when and where…I’ll be sure to call in sick with Covid!

Maybe that guy in Wisconsin should ask local distributors since WI is one of the largest potato producers in the country. Idaho produces about 30% if the countries crop so shortages will be localized I think. Bigger question is what caused this and not a drought. Idaho irrigates most of its crops and its water supply has been cut by environmentalists to keep more water for salmon.

‘Give us fish, raw and wriggling, you keep nasty chips’.

Idaho has more water per acre than any other state. How can there be a water problem there? It’s nothing but lakes and rivers up there.

Alabama has way more water than Idaho. Pretty sure Idaho ranks low for water. The Cascade mountains block it off from Pacific rains and the Rockies block off some of the the E/NE winter air mass. A good portion of Idaho is semi arid.

Hamburger Mikey in Muskegon is MIchigan, not WI. I was born in Muskegon, MI. I figured there couldn’t be another Muskegon in WI and following the link confirms it is MI.

If I had my druthers, I’d druther salmon than potatoes,

It’s time for those Victory Gardens to make a return. Or as I call them, my Killing Fields where perfectly healthy plants meet their untimely gruesome deaths.

But there are two crops that are fool proof, potatoes and squash. And both are prolific. Just try to stop squash from spreading through the neighborhood. Even you compost pile becomes a squash field. It’s a invasive species if ever there was one.

Try a three sisters approach; corn followed by beans and squash once the corn is high enough to offer shade to squash and support for beans. Simple and hard to mess up. Perennials like asparagus, sweet potato, some broccoli and spinach are an option. Many herbs are perennial. Local climate matters of course as does time and attention you have to invest in a garden. Simpler is better for beginners.

I agree about squash.
Daddy grew one half acre of squash that yielded fourteen tons of squash over five years, counting all the stray squash!
Our neighborhood was inundated from 74-79 with squash.
Yuck!

I wonder how Kamala spells potato.

That makes her Mrs. Potatohead, right?

Jill is Mrs. Potatohead. Kamala is a different type of tuber.

Now we can have our VERY OWN Potato Famine!

We have finally arrived….
…although, looking around, I’m none too sure about the neighborhood…

F this S.
I’ve had enough.
I’m emigrating to Ireland.

A metaphor for our (*ahem*) spuddering economy?

Gee, when will someone look into US Foods?
They are everywhere, and all of a sudden.

Wheat is going to be next.

Yet it’s still more profitable to grow pumpkins which don’t get eaten and end up getting thrown away.

This year I have a giant volunteer pumpkin vine growing on our side lawn. The Missus is humoring it because she loves all her plants and animals, and she can invite all the grandkids’ pals to come pick out a free pumpkin in October. Leaving me to wonder if, once they ripen, our free-range burros are going to have a party some night when we’re not watching.

Most corn mazes use “feeder corn” rather than commercial sweet corn. Once the farmer has swept up a tidy profit off the neighborhood hoodlums, then it what’s left is cut for feed.

Worry not, Brian Stelter is now available to solve the nation’s potato crisis.

Lettuce and celery hasn’t been all that good either. And you are correct, we’re finishing up last years crops. This year might not be too good.
However my suggestion is to quit delivering all food to DC. Those pieces of schiff caused most of the problem, let them hunger for a month or two.

What we have are too few people willing to put out the effort to provide for themselves. It’s not too difficult for anyone in the US to do a bit of container gardening and rerooting new plants from your scraps even in an apartment. There are all kinds of tutorials out there, it’s just a matter of doing it. I’m in the middle of a severe drought and praying I don’t have to sell anymore of my livestock due to lack of feed. A garden would be a waste of water, however, a neighbor and I cooked up a plan for some small container crops using our grey water and a terrarium style system. It won’t feed a whole town, but it will make enough to keep our family in vegetables with minimal work while giving the crop producers some breathing room to do the job they do extraordinarily well.

I would not expect prices to go down much in the fall. One nephew who grows a high percentage of his land in potatoes planted wheat and alphapha instead. He could not get the fertilizer committment he needed to grow the potatoes.
Plus the farmers expenses for fertilizer and diesel fuel are hugely higher. More will keep potatoes in storage till the price is high enough that they make an income this year.