NYPD Cops Quitting Before They Qualify for Pensions: Leaders are ‘Putting Victims and Police in Jeopardy’

NYPD Cops Quitting Before They Qualify for Pensions: Leaders are ‘Putting Victims and Police in Jeopardy’

Former detective: “I wouldn’t really encourage that many people to take this job anymore.” 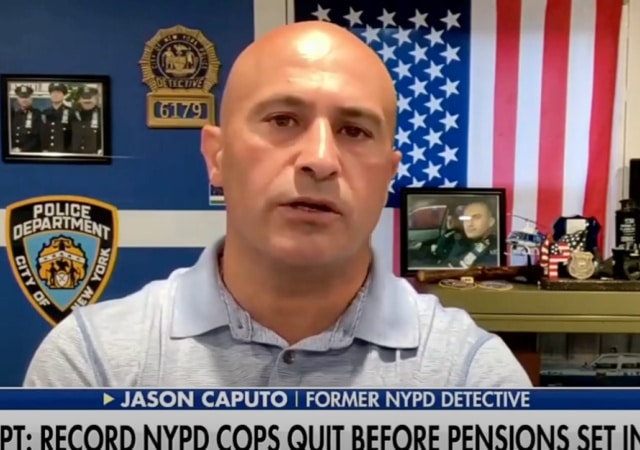 Crime continues to rise in New York City, but the NYPD is bleeding cops more than last year.

Ever-growing exodus figures show 2,465 police officers have filed to leave the department this year — 42% more than the 1,731 who exited at the same time last year, according to the latest pension fund stats obtained by The Post.

More disturbing is the fact that the number of cops hanging up their holsters early — before reaching 20 years for a full pension — has skyrocketed 71% this year from the year before (1,098 from 641).

Former NYPD detective Jason Caputo left his post in July after 18 years on the job. He was two years shy of earning his pension.

Caputo told Fox & Friends the officers no longer have “incentives” to work for the department:

Caputo claimed the city is “steering away” from encouraging officers to apprehend criminals, adding that city and NYPD leaders are “putting victims and police in jeopardy.”

Caputo concluded: “I wouldn’t really encourage that many people to take this job anymore.”

Strohmier shifted the discussion to New York City’s “diaphragm law,” which prohibits officers from placing suspects in choke holds or exerting pressure on a suspect’s diaphragm and pointed to a recent example of MMA fighter Ro Malabanan, who helped take down a criminal suspect by securing him against the ground.

“The progressive city council would have went after an officer [if they had done the same move], they would have went after their job,” Imperatrice said. “Any type of fight – especially martial arts – you end up on the ground, and that’s what it’s all about; you’re trying to subdue the individual. That MMA fighter did nothing wrong, but he had to use his body weight to subdue them until officers arrived…”

Caputo’s thoughts expand on his interview with The New York Post when he retired. He said he “had enough” and “it’s not the same job” he took 18 years ago:

“The no-bail law was a big thing with me,” he said. “It’s not even really crimefighting anymore. You arrest somebody for assault 2 with a weapon and then the person is back at the precinct getting his property the next day. They’re not locking anyone up, even those with records. Pay your debt to society. You broke the law.”

Caputo said he also worried about making arrests and running into problems with city laws, such as the one prohibiting officers from putting pressure on a person’s diaphragm.

At a certain point one must simply decide that the people deserve the government that they elect. For my friends here at LI, that’s unfortunate.

and then comes in the tin foil hat theory of the REAL REASON for defunding the police in local jurisdictions: the creation of a national police force only answerable to the federal government/bureaucracy

Majority as in residents? or Voters?
The fact that only 20 to 25 % of all eligible voters cast a ballot in ANY election is a national sign of apathy. The winners are there by a majority of the minority of eligible voters. To have a more balance and reflected election of those being governed, the hard pull, the real work takes place prior to the primaries and not on election day. Prior to the elections by getting communities vested in getting those eligible 75-80% registered and getting them to the polls to vote. In the cities it may include bus shuttles to early designated voting booths or in the rural areas, neighbors picking up others during the election day. Whatever it takes to make it important to them that their vote matters…even when the vote does not make for a winner. Democrats have demonstrated the strategic side of early registering and absentee voting and too often ‘back-doored’ into law by the same state party government which wants to hold control to prevent any change which would change “their” direction. It’s the ‘apathy’ party that lose the elections.

NYC police need to do what the police department did in Kenly, NC.

Say what you like about Mayor Adams, he must’ve been one hell of an ex-cop.