Only charged with a misdemeanor and released under NY’s bail reform laws, which are turning the city into a violent nightmare. 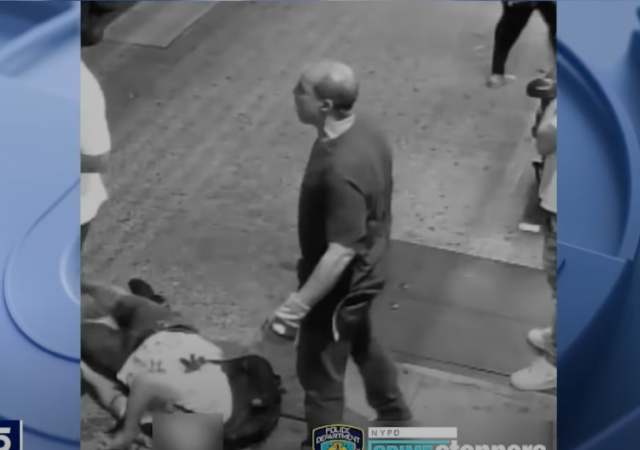 Convicted sex offender Bui Van Phu, 55, is accused of sucker punching Jesus Cortes, 52, outside of a restaurant in the Bronx.

Aug 12th in Bronx NY a 52 year old man was knocked out unconscious in an unprovoked attack. The man was taken to the hospital and is in stable condition #NYC #Bronx #wednesdaythought pic.twitter.com/9IZ6GVrU6v

Cortes went under brain surgery. Doctors put him in a medically induced coma. His brother Juan said he is “day to day.”

He told NBC New York: “My brother is in this condition because of these criminals walking the street. I don’t wish this upon anyone. The only thing I want justice is for my brother. Apparently, this person has a criminal record.”

The Bronx Criminal Court released him “on supervised release without bail” since the new charges are not eligible for bail.

The Daily Mail reported that documents state the charges changed because Phu “intentionally (caused) physical injury and with intent to harass, annoy or alarm another person.”

The DA spokesperson said: “The police charged him with Attempted Murder and when we got the case we evaluated and charged based on evidence we had. The investigation is continuing.”

It’s weird because, in January, Clark promised to “continue to treat incidences of violent crime with the utmost seriousness and will do everything possible to protect the people of the Bronx from violent criminals.”

The punishment for third-degree assault is up to one year in prison. The judge could sentence the person to three years probation, though.

Second-degree harassment in New York is considered a violation, not a crime. The punishment is up to 12 days in jail. But most of the time, a violation “will resulting a ‘time-served sentence, which oftentimes is no jail time at all, or just the time spent in arrest processing.”

If Phu pleads guilty to the second-degree harassment, he won’t “have a record.” But since he has a record, I guess it won’t go on it.

There appear to be no previous interactions between the men.

Phu has a disturbing criminal past:

Bui was also charged with criminal possession of a weapon and robbery in the city back in the 1990s, police sources said.

So Bui is out on parole. He allegedly confessed the crime to his parole officer: “I hit someone and he’s in the hospital. I don’t know if he’s dead. The police are looking for me.”

Do not be surprised – this is EXACTLY what the powers that ought not be want.

Woe unto those that call evil good, and good evil.

Bruen (the case, not the chief) is throwing a monkeywrench into this “progress.”

Progressive, forward-looking social policy. It mirrors the wicked solution (e.g. planned parenthood) where the burden of evidence is aborted and sequestered in darkness, the twilight fringe.

The attacker is a felon on parole and the victim of that unprovoked bastardry is in a coma!

By what possible reasoning did that get downgraded from attempted murder to misdemeanor assault and release at all much less no-bail release? How does this not violate his parole?

Rhetorical questions of course, the answer is ‘progressive controlled city’.

Sucker punching someone who from behind so there is no opportunity to mount nay sort of defense is so heinous and cowardly and act it defies comprehension.

I am old enough to remember when when prosecutors actually prosecuted people who committed heinous crimes, now they social justice engineers striving to keep the worst people on our streets.

Why anyone without enough money to live in a secure building and afford private transportation would live in NYC Is beyond me. Ditto SF.

I agree that such crimes are indeed heinous. Victims have been killed by such sucker punches, where they fell to the ground or concrete and were unable to soften their impact, resulting in fatal head injuries.

The sucker punch itself is dangerous: hitting somebody in the back of the head is a significant risk for basilar skull injuries, which are nasty even in “simple” cases.

Which fits interestingly with the visible mid-riot tactic in recent years of surrounding a victim-to-be until one of the crew gets a clean shot from behind. Max damage. Max surprise and uncertainty. Max ability for misdirection.

It’s like those incidents are crafted, “pours encourager les autres.” Step out into the world, unarmed of course, and you are taking your life in your hands. Excuse me, their hands.

It’s not bail reform, it’s unleashing criminals onto the population to keep them at bay

It’s due to their perennial, indefensible and decades-long coddling of criminals, combined with their callous disregard for/indifference towards crime victims and public safety, and, their facilitating of entry by illegal aliens, that I’ve long-stated that the vile Dumb-o-crats are fairly and appropriately characterized as a criminal-enabling enterprise.

And, how is sucker-punching a person in the head, resulting in potentially fatal injuries, not inherently charged as felony assault in the first degree? It’s outrageous to charge this type of violent attack as a misdemeanor. The prosecutors in this case are vile Dumb-o-crats being driven by their criminal-coddling ideology, not by facts and law.

Reason #247 why NYC or SF or LA won’t issue carry permits. If citizens started taking these thugs out, as Skip said, they wouldn’t be able to keep the population at bay.

There are other ways than no-issue to effectively nullify permits. NY and CA will issue permits and then order their district attorneys to aggressively prosecute any permit holder that shoots their attacker. Making most of the state a no-carry zone is the other favored means, SCOTUS still won’t slap down zone chicanery.

I think that in this case, the DA prosecuting weapons holders, the old adage comes to mind in that “I’d rather be judged by 12 than carried by 6”. I have personally traveled all over the United States (RVing) and have always carried (Tanfoglio chambered for 40 S&W). I’ve never had any problem (s0 far, thank the Lord).

I understand that this happens.
I don’t understand why, on the whole. the citizenry is OK with it.

Because they forgot the Alamo!

Regardless, we are living in an entropic society where disorder seems to be increasing by the day.

Personally, I believe it is our fate to fade into history after fulfilling what we were meant to do: create the state of Israel, which would not have been possible without our involvement in WWII.

Soon it will be time for the kingdoms of old (which we are not one) to gather for the final battle of good and evil.

Sorry MePeabody.
That was meant for Colonel Travis

No problemo xleatherneck. I hit the deck and then realized you weren’t shooting at me or I would be dead.

I really think that these “prosecutors” are intending to create mayhem. They want 1) people to start taking up arms against these thugs because it will help the gun control narrative and 2) they want people to demand “law and order” because it will enable them to bring in their own jackbooted thugs to enforce left wing policies.

I’ve long said that prosecutorial favoritism is shown not just in who does or doesn’t get charged, but in the choice of charges.

I knew NY had jacked up bail but I hadn’t realized they were doing this for folks on parole as well.

The a-holes who run the cities (Democrats, Progressives) want to keep the populace in a constant state of fear. It’s working. Driving out hard-working decent people from their jurisdictions so nothing is left but SCUM and the helpless victims of SCUM too poor to get away (or so RICH they have the means to protect themselves). Our cities will become hollowed-out shells of derelict SCUM and the Progressive grifters will have total control to dominate state legislatures to suck dry the coffers of people in the suburbs. Progressive politicians are far worse than the JOKER in The Dark Knight movie. And, unlike the fictional Joker from the movies, they are ALL TOO REAL. Eff them all to HELL.

According to The Daily Mail, the guy’s back in custody, ordered by Gov. Hochul.

That is correct, for violating parole, not for nearly killing someone. The political blowback just got to great for Gov. Hochul who was bragging about protecting the public on TV, but not firing the prosecutor.

New Yorkers moving to the South

Go back to New York or join the Republican Party; you have what Democrats are trying to build in the South in New York already stay there if you like it.

Please make a distinction between “refugees”, which are productive people who have done the best that they could with what they had, and are now fleeing the desolation-to-come of the megalopolis, and the “colonizers”, who have never had any values/standards/ethics/morals, and will never learn the lesson that how they have voted has led to them leaving the place where they have shit the bed, and coming to somewhere better to shit the bed there.