Netanyahu on Biden-Iran Nuke Deal: “This is madness! This is the height of folly!” 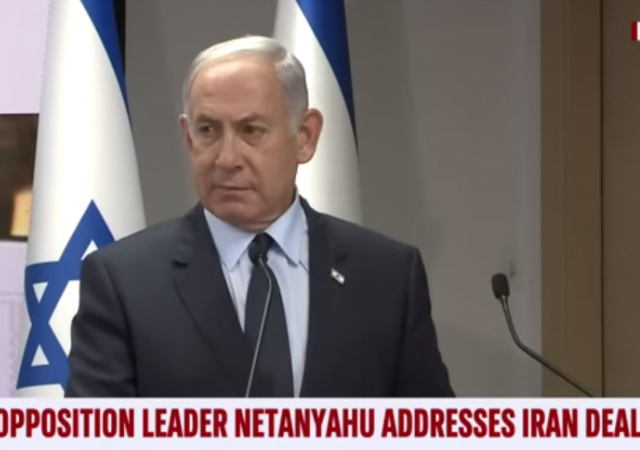 Former Israeli Prime Minister Benjamin Netanyahu has warned that the deal presently being finalized by the Biden administration would pave the way for Iran to build nuclear weapons.

“I think this is a horrible deal, a dangerous deal that will pave Iran’s path with gold, a golden paved highway to a nuclear arsenal,” Netanyahu said Wednesday. The Likud Party leader described the proposed Biden-Mullah deal as “madness” and “the height of folly.”

The former Prime Minister has publicly and privately lobbied against any form of nuclear deal agreement with #Iran over the past decade pic.twitter.com/O4slKaEicX

Netanyahu’s statement comes amid reports that President Joe Biden is close to finalizing a new Iran deal. Almost one year after the disastrous withdrawal from Afghanistan, the Biden White House is on the cusp of rejoining the Iran nuclear deal, reversing President Donald Trump’s 2018 decision to withdraw from the Obama-era agreement.

But it is unlikely that the U.S. president or his advisors would heed any sound advise at this stage. Biden, who calls his Afghanistan pullout a “extraordinary success,” recently slammed Trump for making the “gigantic mistake” of withdrawing from the Obama-Kerry deal. Going by his statements, Biden appears to have long lost touch with reality.

On Wednesday evening, former prime minister Benjamin Netanyahu took to the podium at Likud headquarters in Tel Aviv and addressed the nation, live on Facebook.

“I want to direct your attention to a development that casts a heavy shadow on our security and our future”, Netanyahu said, with a solemn and worried expression. He warned about the “horrible,” “dangerous” and “very, very bad” deal emerging between Iran and the West. (…)

A few hours earlier, he had the same message for foreign audiences, and gave alarming interviews on Fox News and Al-Arabiya. “I think this is a horrible deal, a dangerous deal that will pave Iran’s path with gold, a golden paved highway to a nuclear arsenal,” he cautioned. “This is madness! This is the height of folly!”

The Israeli intelligence agency Mossad also warned against the looming ‘disastrous’ deal currently being considered by the Biden White House. “Mossad Chief Dedi Barnea said on Thursday that the nuclear deal with Iran, that is now being considered will cause a strategic disaster, because it will facilitate Iranian’s long-lasting efforts to obtain a bomb,” the Israeli broadcaster Ynet News reported.

The new deal, much like the old one, will also be a huge boost for Iran-backed terrorist groups operating across the Middle East. The Mossad chief “said that the deal will infuse Iran’s purse with billions of dollars that will be diverted to fund terrorist groups including the Lebanon based Hezbollah, the Hamas and the Islamic Jihad, as well as other proxies and will pose a challenge for both the U.S. and Israel,” the news outlet added.

Netanyahu, Lapid Speak in Unison Against a Biden-Iran Deal

In Israeli political landscape, Netanyahu is not the alone in taking a clear stand on the impending bad nuclear deal. Israel’s caretaker Prime Minister Yair Lapid echoed the opposition leaders sentiments, saying his country will do everything to prevent Iran from going nuclear under the cover of a revised deal.

Prime Minister Lapid declared that Israel will not be obligated to honor such a deal. “Israel is not committed to any of the restrictions stemming from the agreement and will utilize all available tools to prevent the Iranian nuclear program from advancing,” the prime minister announced this week.

Both Netanyahu and Lapid are locked in a tight contest to win the Israeli general election scheduled for November 1.

The latest round of elections were called in late June after Israel’s ruling coalition broke up, and the parliament voted to dissolve itself.

Israelis will be voting to elect a government for the fifth time in three and half years, and Netanyahu—the country’s longest-serving prime minister—is campaigning to return to the office for the sixth time.

As Israelis head for a fresh election, voters appear to favor the Netanyahu-led right-wing bloc. Most opinion polls show Netanyahu’s alliance leading with a slight majority. However, with almost two months to go until the election day, the shifting political alliances and public opinion could change the outcome.

It is estimated to cost the US a trillion dollars over the next 10 years. Don’t worry, before it reaches that much they will already be firing those nuke missiles at us. And we are already over $100B in Ukraine.

Time to rethink our defense spending in a bigly way. Focusing on OUR national security shouldn’t cost more than a fraction of that. We just need to reduce our global footprint to protect OUR national interest rather than those of our enemies and frenemies. We are the only country on earth that has everything it needs to thrive. I just don’t care anymore about “mankind”. It isn’t worth our freedom.

Was going to write “I couldn’t agree more” and say something about how I wish I could upvote >1 … but I won’t. I won’t because I live in terror of The “down-twinkle” faerie.

The attempted assassinations of Mike Pompeo, John Bolton, Salman Rushdie and that Brooklyn-based dissident (her name escapes me) on U.S. soil should fairly have been the nails in the coffin for the Dhimmi-crats’ indefensible and morally stupid coddling of/enabling of the Iranian regime’s unrepentant and brazen belligerence and predations. But, history has demonstrated that the vile Dhimmi-crats never met a Muslim terrorist or a totalitarian despot that they didn’t attempt to fete, lionize and show deference towards.

Biden will be the last president of the Union as 50 states.

The “down-twinkle” faerie has returned.

In context with your above comment, probably a neocon.

It just means you are getting to Fatkins…enjoy

While in session with the majority, a resolution could have passed ruling unilateral deals from the executive branch without the advice and consent of the senate are disallowed. They did nothing and here we are.

I should say America’s WEF administration

If Biden conducts himself in this negotiation and makes what he considers to be informed and intelligent decisions, expect nothing more than having more of the same asinine outcomes in keeping with all of the others.

“Netanyahu on Biden-Iran Nuke Deal:
“This is madness! This is the height of folly!”

Now you’ve done it, Bibi.
Joe’s going to ask you to hold his Ben & Jerry’s.

Gentlemen, what we are witnessing is the execution of a planned transition.

1. WWIII will build an argument for global government.
2. Runaway inflation, famine, and disease will push many off the income ladder and over the edge leading to government dependence.
3. The global human farm is born.

Israeli comments aside, the following question looms large. Whose side is Biden on?