10 years, over 10,000 posts, with his “boss” Finn supervising his work. Mike has become a good friend to me and our other team members. 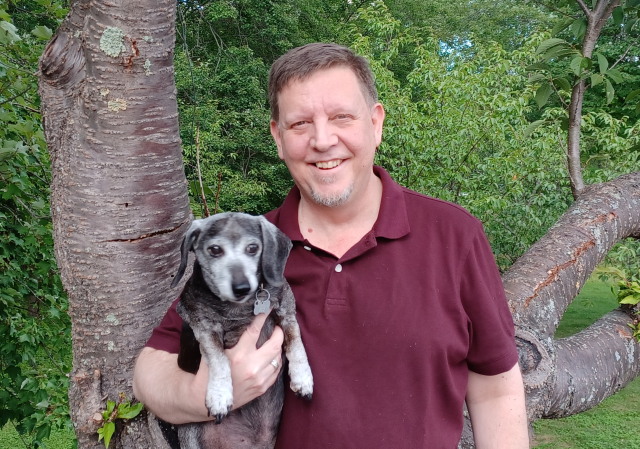 This is making me feel really old. I can’t believe Legal Insurrection has an author who has a 10th anniversary.

We’re only 14 years old (next October), and the first two years were just me, then in the third year just me and Cornell student Kathleen McCaffrey (Breitman). Mike joined us in August of that fourth year (2012). Mike initially worked behind the scenes to help us launch College Insurrection (subsequently rolled into Legal Insurrection), and his first post at CI was August 26, 2012.

You may know me as Aleister of American Glob.

You may also remember me as the guy who created this video.

I’m still writing at American Glob but now I’m writing here too. I’m very grateful to William Jacobson for the opportunity to join the Insurrection team and I look forward to the rest of College Insurrection’s freshman year.

When I think about what led me to this point, I have no choice but to quote a hippie.

What a long strange trip it’s been.

I launched American Glob in 2004 as a parody news site inspired by The Onion. I updated the site only once a week and I knew nothing about blogging. Bostonians sometimes refer to the Boston Globe as the Boston Glob. My concept was to make fun of national news using the same nomenclature.

After two years of writing fake news stories for American Glob, I gave up. The site just sat there for three years, completely untouched. Then the 2008 election happened and I felt compelled to speak out. I dusted off the cobwebs and reinvented American Glob as a political blog.

As a lifelong New Englander, I always assumed I was a liberal. I was wrong. As a member of Generation X, I knew Obama was a bullshit artist the first time I heard him speak. I was right.

William Jacobson and Legal Insurrection have been a constant source of inspiration for me and I’m absolutely psyched for the opportunity to participate in the dialogue here.

As someone who’s worked in education for most of my life, I feel uniquely qualified to address the issues you’ll read about here at College Insurrection in the months to come.

Finally, if you’re wondering about my pen name just Google it.

I’m aspiring to be the wickedest man in New England.

All the best and thanks for reading,

I summarized much of Mike’s background and those early years in his 5th Anniversary post in 2017. In the early years Mike wasn’t Mike, he was “Aleister” until 2017 because he worked at a liberal theater company and feared outing himself could cause work problems. So many people used aliases because cancel culture existed long before people called it cancel culture.

The statistics on our dashboard say that Mike has had 10,020 posts at Legal Insurrection, but I don’t think that includes hundreds more at College Insurrection. Mike has been guarding the walls reliably and without any drama day and night.

Mike also has become a good friend to me and our other team members over the past decade.

But enough about Mike. I want to talk to you about Finn, Mike’s owner and Legal Insurrection’s on-site supervisor of Mike. Finn rescued Mike on June 9, 2014. I remember Mike contacting me with excitement: “So I got a dog … He’s a black Dachshund and I’ve named him Finn. Just picked him up tonight.” 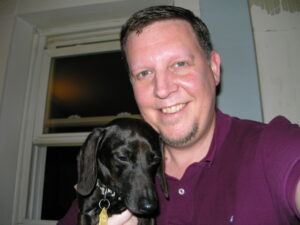 Over the years, Mike has regaled me with Finn’s exploits, including catching mice, and confirmed the science: “I’ve heard Dachshunds like Carrots. It’s true.” 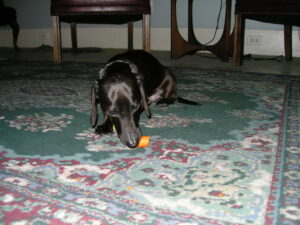 My contribution to Finn’s mental well-being was suggesting Mike give him pig’s ears to chew on (it went over bigly with him). I’ve enjoyed all the Finn stories (there are plenty) and photos. I have more photos of Finn than I do of my own dog.

I’ve never met Finn. That’s on my bucket list. Somehow I doubt meeting me is on Finn’s bucket list.

Finn has contributed posts to Legal Insurrection. I’m not sure which of Mike’s more than 10k posts were created by paw, although I have my suspicions. 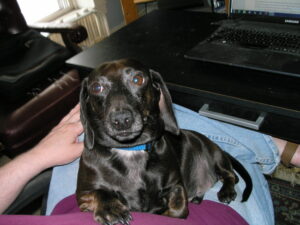 Finn is getting a little gray around the edges (who among us isn’t?), but he is still a snappy dresser. 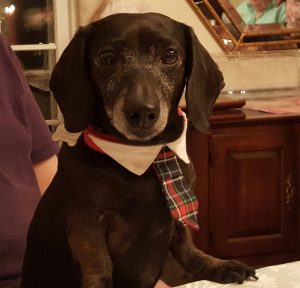 But enough about Finn.

This post is about Mike. A great friend to me, my wife, and the rest of the Legal Insurrection family.

Thank you Mike for a great 10 years, and we now raise our glasses in toast to the next 10 years.

Congrats, Mike. We’re so grateful for you and the work you do. Privileged to know you and work with you! Happy Blogaversary!

Congrats Mike, keep up the great work, I find your by line on many other platforms as well.

Thanks to Professor Jacobson for the kind words and nice post. Finn thanks you too! Next time someone takes a picture of me, I’m wearing a different color shirt. LOL!

LOL, you look great, and so does Finn! Congrats!

Mike thanks for help making LI of the rare, sane places online.

Thank you for your insightful and informative posts over all these years, Mike.. It is a pleasure to have a happy warrior like you by our side!

I’ve always enjoyed Mike’s informative posts, and, it’s nice to be able to put a face to the name. Congratulations on a substantive and meaningful tenure and thank you for fighting the good ideological fight with the rest of the inimitable and tenacious LI team.

Enjoy your work and now I have more insight as to why. I have a Boston past secretly lurking in liberal academia and broadcast. I escaped. Congratulations!

Wow!! We readers are so lucky to have Mike. I’ve enjoyed his posts very much and always wondered how a writer could express my thoughts so succinctly.! Thanks, Mike, for all your years of dedication to LI. And let Finn know that his dedication to your audience is appreciated as well.

Congratulations, Mike, and to Finn, also.

I like your writing and look forward to the next ten years.

Mike, thank you so much for your hard work and the time you spend doing it. I appreciate it very much!

Oh, and nothing wrong with the color of the shirt. Really!

However, the dog is looking older as we all are. We all looked so beautiful when we were young!!!!!

Congratulations, 10th anniversary and still viable. Evolution (“life”), baby, is worth it.

cool
dog seems nice too.
I mean he ain’t no cat but thats not my fault 🙂

Thank you for all the work you do Mike.. and Finn is a cutie

Thanks for all the wonderful comments, everyone. LI has the best readers!

A nice achievement for you and Finn!! As a more than daily reader, and occasional poster, of LI, I do enjoy your keeping a pulse on the various college campii. Hopefully, the supply and demand of woke indoctrination will cause Big Education to rethink it’s position with so many potential students opting for the trade and craft route. Time will tell. Keep up the good work!!

Congratulations on ten years of solid work. Your stories have been well-researched and not just the “rumor of the day.”

Mazal Tov!
And, THANK YOU!