Just Who Are the Intolerant Ones Again?

Just Who Are the Intolerant Ones Again?

“What we’re seeing now is the beginning or the death knell of an extreme MAGA philosophy. It’s not just Trump, it’s the entire philosophy that underpins the – I’m going to say something, it’s like semi-fascism.” – Joe Biden 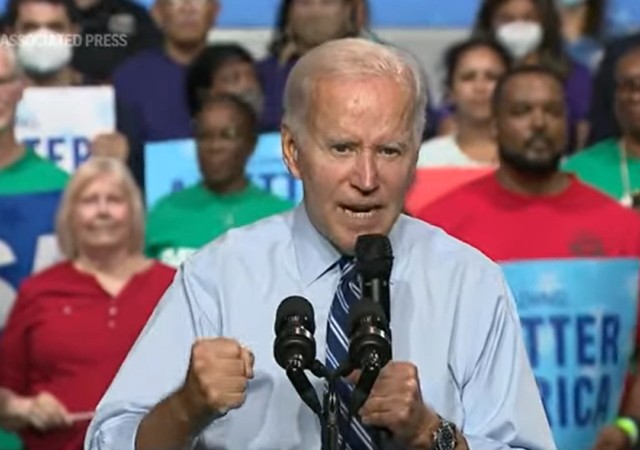 According to the mainstream media and Democrats, President Biden is on the comeback trail with a “string of wins‘ and is making a bid to solidify the base and unify the country with him ahead of the all-important 2022 midterm elections.

Wait, unify the country? That’s not what he sounded like he was doing when he hit the stump last week.

As we previously reported, Biden told a group of Democratic donors in Maryland Thursday that “What we’re seeing now is the beginning or the death knell of an extreme MAGA philosophy. It’s not just Trump, it’s the entire philosophy that underpins the – I’m going to say something, it’s like semi-fascism.”

Later, during a campaign rally, condemned “MAGA Republicans” who he said could not accept the results of the 2020 presidential election. Biden also proclaimed that “I respect conservative Republicans. I don’t respect these MAGA Republicans.” He noted during the same speech that “There are not many real Republicans anymore” though he did mention he liked the kind of Republican who Democrats “can deal with” (translation: walk all over) like Republican-In-Name-Only Maryland Gov. Larry Hogan:

Biden: “There are not many real Republicans anymore. By the way, your sitting governor [Hogan], he’s a Republican you can deal with … I respect conservative Republicans. I don’t respect these MAGA Republicans” pic.twitter.com/OQ6F8gr53z

When he was asked the next day what he meant by “semi-fascism,” Biden demurred:

"What do you mean by semi-fascism, sir?"

Biden, smirking: "You know what I mean." pic.twitter.com/hMJk2GpSmv

Biden’s comments trashing “MAGA Republicans” came on the heels of Florida Democratic gubernatorial nominee Charlie Crist telling a reporter that he didn’t want the votes of anyone who supported his opponent, Gov. Ron DeSantis, because they have “hate in their hearts”:

“Those who support the governor should stay with him and vote for him and I don’t want your vote. If you have that hate in your heart, keep it there. I want the vote of the people of Florida who care about our state: good Democrats, good Independents, good Republicans. Unify with this ticket. Those who are haters: you’re gonna go off in your own world.”

Crist: "Those who support DeSantis should stay with him and vote for him and I don't want your vote. If you have that hate in your heart, keep it there." pic.twitter.com/S0B93bw52i

Just days earlier, on the eve of the New York state primary, Gov. Kathy Hochul advised her Republican opponent, Rep. Lee Zeldin, and his supporters to “get out of town” and go to Florida, telling them they “were not New Yorkers”:

“Get out of town because you do not represent our values. You are not New Yorkers.” 🤣🤣🤣🤣🤣🤣 pic.twitter.com/5PlM3Jkwl4

Hochul’s comments were reminiscent of those made by then-Gov. Andrew Cuomo, who said in 2014 that conservative Republicans “have no place in the state of New York.”

The basis for Biden’s, Crist’s, and Hochul’s comments were, in part, Republicans who questioned the 2020 presidential election results, which is something we’ve been repeatedly told is a threat to our very democracy and should not be tolerated.

And yet in the same speech Biden gave to Maryland Democrat voters, he said Democrats needed to strengthen their majorities so “no one has the opportunity to steal an election again”:

Freudian slip? Joe Biden he wants to "make sure no one has the opportunity to steal an election AGAIN." pic.twitter.com/6FYdBgpELP

And strangely, Hochul didn’t order failed 2016 Democratic presidential nominee Hillary Clinton out of New York, either, despite her continued claims going on for six years now that former President Donald Trump “stole” the election, a point Sen. Tom Cotton (R-Ark.) made in his own way on Fox News, as reported by the liberally biased crowd at The Recount:

In response to President Biden calling MAGA Republicanism "semi-fascism," Sen. Tom Cotton (R-AR) says "it's Joe Biden and the Democratic Party who, for instance, refused to accept that Hillary Clinton lost the election in 2016."

As for Crist, if he doesn’t want the votes of so-called “election deniers,” he might want to bow out considering a good chunk of the state’s Democrats still believe the 2000 election was “stolen” from Al Gore.

Amazingly, the Washington Post painted Biden’s “semi-fascism” swipe at conservatives as a “reflection of [a] newly aggressive Biden strategy,” apparently forgetting that Nasty Biden is who Biden actually is, as evidenced, for example, by his deplorable Georgia speech earlier this year where he suggested those who opposed his agenda were no better than the racist Democrats of yesteryear (some of whom he once bragged about working with).

So just who are the intolerant ones again?

.@KathyHochul says to republicans Get out of the state

I think we have our answer.

TY Stacey., it is called projection.

Joe Biden is insane and away goes unity down the drain.

Conservatives by nature want to be left alone. Leftists by nature want to control. If conservatives don’t wake the F up and fight these tyrants, there will be nothing left to conserve. I was on the left a very long time ago. Back then, even when I was young and stupid, it was apparent to me that the right didn’t do anything but sit there and take it. Every now and then someone would come along and fight but it was rare and, on the whole, the right has not done anything but lose ground. Not this hill. Not this hill. We need to wait and save our resources for the Good Fight (which never comes.) Fast forward to 2022: we have federal takeover of health insurance, college loans, leftist control of media, academics, pop culture, covid tyranny, etc.

Over the years, it has become apparent to me that the (R) party, on the whole, tolerates (D) party rule and damage. I think this is because once you reach a certain level of big power, it becomes an exclusive, elitist club. I have mine, everyone else be damned.

This needs to change immediately. We are up against people who hate our core. That is dangerous as hell.

Something sure seems smelly.

Elected Republicans seem to often be democrats. It never goes the other way.

When was the last time a “liberal” judge was a consistent originalist?

The whipping and beheading are to remind Trump supporters what fascism means.

They are sure making it easy for us. So far they have McConnell and his gangs openly working against the MAGA red wave. and yesterday:

So Kinzinger is not an outlier but a normal GOPe scumbag following the orders of the GOPe leadership. It’s a very long list and we know who they are.

We may be outnumbered for now in Congress but their numbers are going to be severely diminished in a couple of months. And then Trump will sweep in another wave in 2024. DeSantis should have no trouble cleaning up in 2028.

Don’t count on it…unless China quits subsidising our media sources and they are forced to flip sides to generate revenue.

I haven’t received my Ultra MAGA gear yet and they are changing the name again. /s

“Get out of town because you do not represent our values. You are not New Yorkers.”

REAL New Yorkers get stabbed in the lung, punched in the back of the head, and raped in the ass, then tell the DA, “Thank you sir, may I have another?”

Halfwit Hochul will only be happy when only those citizens are left.

You can always win me over to your line of thinking…. by calling me a Nazi.

Which big state governments in today’s world are the most fascist and most intolerant of political dissent?

The d/prog view normal people as a resource to be exploited. We are to pay taxes, fight the wars, build, deliver, install and repair the products or services that make 21st century life possible. We are in many ways viewed as tools, necessary but ultimately expendable.

The d/prog have aligned with global business and global institutions. They view themselves as enlightened and us as backwards rubes. Their neo feudal outlook doesn’t acknowledge that we should have individual rights equal to their own because they view themselves as our superiors. We are to be smiling laborers, working at their direction, tipping our hats to our betters. They don’t want to hear our opinions because they don’t believe we should have an opinion. We are viewed as lesser beings. That’s why they silence dissent, demand indoctrination and exile those who refuse.

IMO, this is analogous to Georgian England or Ireland. The powers of the day didn’t tolerate dissent. They would seek to bankrupt any member of the middle class who stepped out of line and transport or hang the lower classes. The public pronouncements and the reaction to them is telling. The minor amount pushback from the TV talking heads is centered on whether the pronouncement was a political mistake v an ethical or moral error.

The end of the MAGA, the beginning of MAWA: Make America Weak Again.

Joe Biden does an “Afghanistan” to Iraq

Well Brandon, there aren’t. Many true Demorats anymore. They are fascists.

Well, I was able to quote this one directly last evening when an old friend asserted her problem with Orange Man Bad being “divisive.”

Our D-Party folks (and by extension the institutional R’s) still can’t bring themselves to consider they got Trump-I because they insisted on nominating the only person who could conceivably lose to him, who ran the only campaign bad enough to secure the L.

They still haven’t adjusted to the “freedom of information”: multiple channels and durability of content. The spectacle of the Empire sets that day’s agenda whether they’re done talking about it or not. The video of the Dowager Empress not standing so well at the 9-11 remembrance — “Flu” is not (yet) a brand of box chardonnay — is out there to reference again, years later. It isn’t “talking points”: it happened. Like the cover-up is worse than the crime, the suppression becomes its own story.

Let us recall that he dubbed folks “bitterly clinging”, and never disavowed let alone apologized for. Remember the rest, because they’re afraid because the country’s people are getting less lily-white. Look it up. It’s still out there, along with the — eventual — reporting that Herself’s Irredeemable declaration wasn’t an ad-hoc one-off, but standard part of her patter at fund raisers, speaking to the committed when they didn’t think it would get out.

This is what they really think. This is who they are. Al they have to do is be less reactive than The Orange Crush, less ridiculous than The Feckless R’s, less clueless than people who though Don Quixote-ing in Tricorn hats would change the dreadnaught administrative machinery.

And they can’t even manage that.

They’re selling smug superiority without having to do much. That only works when there’s no other signal.

I do wonder how all this is going to play out. Gonna be an interesting decade.