“It’s becoming a well-worn trail of agents who say this has got to stop, and thank goodness for them and that American people recognize it, and I believe they’re going to make a big change on November 8.” 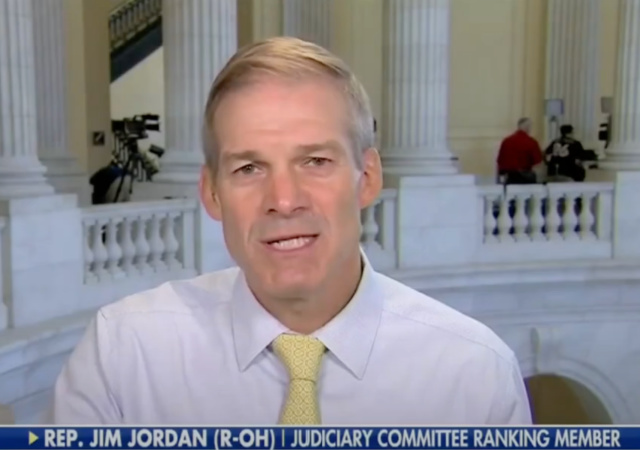 “Fourteen FBI agents have come to our office as whistleblowers, and they are good people,” Jordan told Fox News. “There are lots of good people in the FBI. It’s the top that is the problem.”

“Some of these good agents are coming to us, telling us … what’s going on—the political nature now of the Justice Department … talking about the school board issue, about a whole host of issues,” he added.

Two months ago, Jordan said that six FBI whistleblowers approached the committee. Two came forward in relation to a school board memo and four in connection to the Jan. 6 Capitol breach. In the Senate, meanwhile, Sen. Chuck Grassley (R-Iowa) said in July that whistleblowers had come to his office to provide information, including disclosures relating to investigations into Hunter Biden’s overseas business dealings.

“It’s becoming a well-worn trail of agents who say this has got to stop, and thank goodness for them and that American people recognize it, and I believe they’re going to make a big change on November 8,” Jordan said Sunday, referring to the 2022 midterm elections.

How many of them will commit suicide?

Only the Clintons know.

When I see public resignations among the rank and file, maybe I’ll believe it. Wouldn’t hurt to see a few high profile ones from the J. Edgar Hoover building too.

I don’t think you’ll see any high profile resignations, maybe they just need a push (from the roof).

Tell some Muslims the higher-up Fibbies are homosexual. Then the roof action will start.

Important to remember that there are two kinds of people who wear the FBI badge today.

Not much of a start.

How many of the 37k actually have first hand knowledge and “in the building”? Joe Schmo in Burbank doesn’t really count.

Pensions.
Immunity.
Seen by many as heroes.

That’s the reality. These ham and egg Agents have families. They have kids who need braces and a mortgage that comes due every month. I suppose it would be a fair criticism about the folks not resigning so long as those doing the criticising are willing to pick up the financial burden. Perhaps we could demonstrate own commitment by quitting our own job and squandering our own savings to do that? Talk is always cheaper than actions involving selfless sacrifice.

I don’t exempt myself. I have battled the urge to yell ‘just quit the Agency’. In reality it’s not that clear cut. Especially when we haven’t demonstrated any part of the reciprocal duty we sometimes demand from these folks.

Even the rank and file positions are well paid enough that every one of those families should have a six month cash buffer to fall back on in the event of a catastrophic life event. And we’re not talking about some mid-level manager at Dunder-Mifflin here, we’re talking about armed agents of the state with the power of habeas corpus. Expectations and standards have to be higher.

I have sympathy for the agents who are stepping forward, I do. They’re doing the right thing. But the entire agency is unrecoverable, there’s no meaningful way to determine who the bad actors (or merely passively negligent actors) are, and the only solution is to dismantle the entire agency, terminate everyone, and blacklist them from federal employment in perpetuity. The good agents will be able to find employment in the states or the private sector.

Agree about the need to write off the agency at this point but also believe that the structural failure of having allowed political appointees in that finally poisoned it,

Whatever replaces it needs to avoid that at all costs.

Yea, yea, yea. Let’s feel sorry for corrupt assholes and let them go because they have families.

It would seem their families are important but mine is not.

Get rid of the FBI. It has been corrupt from the very beginning. They have murdered people, planted and falsified evidence, told lies to everyone including the courts, withheld exculpatory evidence, plotted to frame fine Americans like Flynn and Trump, and the list is nearly endless.

The FBI is the enemy of the American people.

The point is that reality has a way of interfering with our idealism. Most of us figure that out pretty early on in life. Did never compromise? Never had bad teacher in HS or College? Did you always tell your Boss he was a sack full of SOB or did you swallow your idealism because you had a family to feed, house and clothe. It’s easy to talk about our ideals and standards especially those we project onto others but haven’t always held ourselves to.

None of that says ‘feel sorry for anything or anyone’. It does remain a fact that someone does have an obligation to their family. None of that discounts the very real problems and history of the FBI as an institution that you mentioned. The DoJ and FBI are almost certainly irredeemably flawed as institutions.

I quit a well paying job as a senior paralegal at a law firm over unethical practices of then the senior partner. It took me a minute to recoup and reorganize financially, but I’ve never regretted making that decision.

Hope Schiffty doesn’t know who they are.

While I don’t want to see “retaliatory” actions once Republicans are in charge of the House and Senate, I also don’t want to see endless investigations resulting in nothing but soundbites, fat reports that nobody will read, and “recommendations” for improved oversight or training to ensure this kind of abuse doesn’t happen again in the future. The obvious problem is that if oversight or training were the answer then how were these abuses possible in the first place?

Were they not being trained before to not abuse their authority? Weren’t they being trained to not base investigative decisions on personal political biases? Were they not conducting internal oversight before and that’s what allowed the excesses and prior abuses? If that’s the case, why should we believe that’ll help in the future?

The bottom line, I think, is that these institutions have lost the trust of the American people, who increasingly see them as enemies of the Constitution and not defenders and servants of it.

These agencies need to be dismantled and only their core missions retained in any rebuilding or reorganization. Again, I don’t want retaliation and I don’t want to become what the Left has, but their teeth need to be pulled. Any agencies that have been weaponized against the people and the Left’s political opponents, but especially the FBI, DOJ, and IRS.

Major question, though is who can be trusted to dismantle these institutions? Who can be entrusted with the reorganization?

“The bottom line, I think, is that these institutions have lost the trust of the American people, ”

Those tricky Rings of Power. Even in the rare case where they do fall into the right hands, there’s only so many times you can flip a coin heads consecutively.

It’s becoming a well-worn trail of agents who say this has got to stop, and thank goodness for them and that American people recognize it, and I believe they’re going to make a big change on November 8.” … oh … and … vote GOP.”

Exactly WHAT did they “blow the whistle” on?

What EXACTLY is the GOPe/RINO group going too actually DO about it?

The FBI has become the Deep State enforcement

They always have been. It’s their job.

Another Republican Pit Chihuahua. He has a cute growl and Bark. Maybe Garland will give him a treat.

“Fourteen FBI agents have come to our office as whistleblowers, and they are good people,”…..

If they are such good people what are they doing knocking doors off their hinges to search homes of parents who speak up at school board meetings?

Why do they stand silent when they know that the FIB are using lies to the FISA Court?

A real whistle blower had better be prepared to put their career on the line, not just talking out of school anonymously to a Congressman. They want to keep their cushy job and pension while they badmouth other FIBers? Who is to know they don’t have an axe to grind and that is the reason they are “coming forward”? Until and unless they are prepared to stand up in open court and make their statements under oath they are just a pack of old women gossiping at the hair salon.
There are federal whistle blower protections but it will be a life changing event regardless.

Looked on Foxnews could not find this article about Jordan and the 14 whistleblowers, kind of odd. Anybody?

The GOP is going to get to the bottom of this. They really mean it this time, right?