If We Don’t Tell Their Stories, Who Will? – Legal Insurrection Summer 2022 Fundraiser

If We Don’t Tell Their Stories, Who Will? – Legal Insurrection Summer 2022 Fundraiser

“Professor Jacobson and the entire staff at Legal Insurrection are true heroes.” 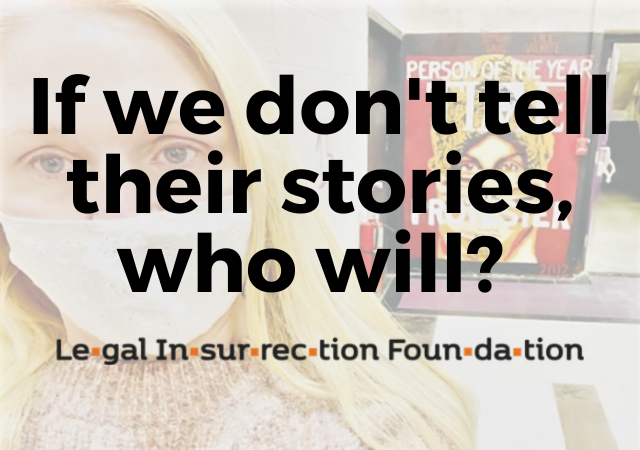 Giving voice to people under attack is one of the things Legal Insurrection does best. We bring light to the darkness of wokeness and cancel culture, and elevate heroic parents and educators to national prominence so that millions of people hear their stories. To help us help others, you can DONATE HERE.

Your generosity helps us tell the stories not only of moms and dads involved in pushing back against the racialization and sexualization of education, but also everyday Americans who come under attack simply for expressing their political or moral beliefs openly. If we don’t tell their stories, who will?

One of those people is Providence (RI) middle school teacher Ramona Bessinger, who blew the whistle at Legal Insurrection about how the new Critical Race curriculum was turning students against her and against their country. They started calling her “America” because she was white. National and international media picked up the story from Legal Insurrection. After a year of retaliation against her, which we continued to spotlight, Ramona has emerged victorious, getting her teaching position back. The Wall Street Journal, with a shout out to Legal Insurrection, recently noted Ramona’s victory.

Here’s what Ramona has to say about the help Legal Insurrection gave her:

Our generous readers, like you, are also true heroes. Because of your continued support of our efforts, you can help everyday Americans like Ramona by making a tax-deductible donation to the Legal Insurrection Foundation, a tax-exempt 501(c)(3).

We thought you’d like to hear from more of the people whose stories we’ve told. This is what we do week-after-week.

“Legal Insurrection’s keen understanding, focus on, and exposure of the facts helped me stand up for parents and taxpayers who opposed our local school system’s decision to “de-level” education in our high school in the name of “equity”. Professor Jacobson and his excellent team provided coverage that launched national and international attention, exerting the pressure needed locally to begin righting the ship of academic excellence our local officials seem intent on sinking. Thank you so much to Bill, Ilana, and staff for recognizing this injustice to children’s education and stepping up to expose it. We got results.”

Thomas A. Smith, Professor of Law, University of San Diego

“In March 2021 I got an unexpected call from my Dean in which he accused me of making racist statements on my blog, The Right Coast, and saying I would be investigated by my university. At a time when I was exposed and alone, a few brave academics, including some of my colleagues and notably Bill Jacobson at Legal Insurrection, came to my defense, publishing stories and writing to the Dean directly. With the support of Bill and eventually many more like him, I prevailed against this attempt to cancel me. I will always be grateful to Bill and Legal Insurrection for standing up for me and for free speech.”

“Professor Jacobson and his staff do extremely valuable work at Legal Insurrection. Those of us in mostly left-leaning academia whose beliefs do not conform and are treated unjustly as a result have an important ally. Anyone with an interest in the genuine free exchange of ideas without fear of retribution should support the great work that he does.”

“When my school board attacked me for asking questions, Legal Insurrection broke my story and followed it doggedly. Parents will prevail in the fight against indoctrination with the help of Legal Insurrection’s showcase of ordinary people who dare speak the truth in a time of extraordinary lies.”

“Legal Insurrection called me a “hero” for suing UCLA after UCLA punished me for challenging a proposal that would have granted black students greater “leniency” in the exam and grading processes. After reading your coverage, numerous black readers wrote to tell me that such a “leniency” proposal demeaned them and was anathema to their values. My litigation fight in pursuit of equality for all continues on, but the real heroes are your readers and your organization.”

“Higher education has been heading down a dangerous path for over a decade now and Legal Insurrection has been there to promote the truth, document the madness, and support those in the academy who care about free speech, viewpoint diversity, and truly educating – not brainwashing – our students. When I documented the rise of the powerful and illiberal administrative class and was viciously attacked and smeared, Legal Insurrection pushed back and provided critical support; LI must be able to continue this for others as their voice cannot be drowned out by progressive mobs that seek monolithic conformity.”

“Legal Insurrection has helped draw needed attention to professors’ cases–including my own–in which university administrators have punished professors for having vocalized ideas that challenge the “diversity/equity/inclusion” mantra. I am grateful to Legal Insurrection’s team–especially to William Jacobson–for all they do to highlight and pushback on “woke” orthodoxy that now has a stranglehold on most U.S. college campuses.”

“In January 2022, I was terminated from my teaching position for not following a vaccine mandate. Barrington was and continues to be the only district in the state of RI mandating/terminating teachers for not complying with a mandate. Legal Insurrection not only provided clear, accurate and precise information regarding our case, Professor Jacobson and his team took the time to hear our story and put into words what we had experienced during this incredibly difficult time. Legal Insurrection showcased the blatant overreach of the Barrington school committee as well as the current administration. Continued support and gratitude for the team at Legal Insurrection, who work tirelessly to get the truth heard.”

“The Legal Insurrection team provided excellent coverage of the two cancellation attacks against me. The information given was accurate and the analysis was extremely insightful.”

You can donate at the DONATION FORM.

My donation today is a mere pittance compared to what you, the LI team and Nicole Solas have done towards the betterment of my town.

Nicole Solas doesn’t stand alone and I hope her actions embolden others when they have questions and aren’t given answers.

Keep up the great work you and the crew are doing.