The American Bar Association, which has been pressuring law schools to go woke, filed an amicus brief in two pending Supreme Court cases supporting the continuation of racially-discriminatory admissions.

The Supreme Court’s decision in the leading discriminatory admissions case, Grutter v. Bollinger, allowed discrimination as a temporary measure (presumed to have a 25-year maximum) to further the stated goal of fostering diversity of perspectives on campus. As we previously reported, Legal Insurrection Foundation filed an amicus brief supporting the petitioner, Students for Fair Admissions. The brief explained the fallacy of Grutter’s reasoning.

You can find our previous coverage here:

In allowing schools to discriminate, the Supreme Court deferred to a school’s “educational judgment that such diversity is essential to its educational mission.” Despite the Court’s deference to schools’ judgment, the ABA is in the process of imposing racial quotas in all but name on law schools. It has also weaponized its power to force CRT/DEI ideology on law schools.

We’ve been covering how the ABA abuses its gatekeeper-status as the sole law-school accreditor, and the monopoly or near-monopoly states give the ABA to set educational eligibility requirements for bar exam applicants, to impose wokeness on law schools. You can find our previous coverage of the ABA here: 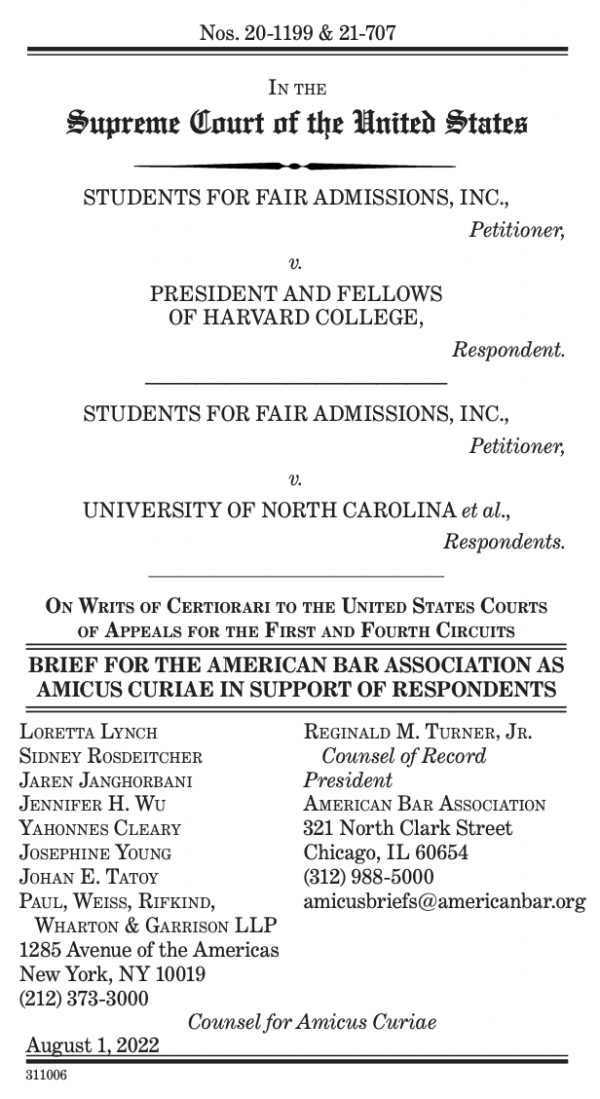 In its amicus brief, ABA asserted that the existence of bias in the justice system is “undeniable”, claiming that prosecutors give harsher plea agreements and judges give longer sentences to black defendants. It also said, lawyers sitting on local school or zoning boards “may” make decisions that perpetuate residential segregation and racial disparities. Ergo, according to the ABA, law schools have to diminish racial bias. It also cited the Grutter opinion in claiming that the Supreme Court has “long recognized” that racially discriminatory admissions create “diverse student bodies that help break down such racial biases and stereotypes”

ABA’s effort to tie the supposed prosecutorial and judicial bias to law schools is also weak:

However, implicit racial bias among lawyers may account for a significant part of racial injustices that continue to taint and divide our society. The Court should not ban race-conscious admissions policies that address this evil directly (Br. at 17 (emphasis added)).

ABA offers no evidence that discriminatory admissions to law schools reduce discriminatory treatment in the justice system. It just asserts, without citing any support, that “The legal system has made significant progress over the last several decades, due in no small part to the increased diversity in the legal profession resulting from admissions policies that consider race as one of many factors.” On the contrary, the supposed evidence of discrimination in U.S. justice systems 44 years after Regents of the University of California v. Bakke suggests discriminatory admissions haven’t fixed the problem ABA says exists.

ABA cites Justice O’Connor’s theoretical analysis in Grutter to claim “‘classroom discussion is livelier, more spirited, and simply more enlightening and interesting’ when the students have ‘the greatest possible variety of backgrounds.’”

But, theory is not reality. As we explained in LIF’s amicus brief, experience hasn’t borne out the claim that discriminatory admissions would add to diversity of perspectives. Rather, the opposite has been the case, as recent headlines show. Faculty who fail to conform to today’s platitudes about “diversity” – from Joshua Katz being fired from Princeton, to Ilya Shapiro being pressured to leave Georgetown University, to Justice Clarence Thomas becoming unavailable to teach at George Washington University after a petition made clear he wasn’t welcome, to Joseph Manson giving up tenure at UCLA because of the ruin of the academy – demonstrate that the “diversity” regimen has actually narrowed the range of opinions that may be expressed.

The fact that ABA is pushing law schools to admit more black and Hispanic law students in the same proposed standard change in which it demands law schools assess whether their environment is “inclusive and equitable” demonstrates that discriminating in admissions and stifling opinions contrary to current racial orthodoxies are opposite sides of the same coin.

ABA makes one final argument. It claims that discriminatory admissions are essential to conferring legitimacy on American institutions. We addressed that argument in the LIF amicus brief:

As for Grutter’s assumption that race-conscious admissions confer legitimacy on law schools – which are not involved in the current consolidated cases before the Court – the argument is strained at best. The Court’s rationale appears to have been that institutions of higher education must be allowed to discriminate in order to give the appearance that they do not discriminate. This is the tail wagging the dog. Even if the argument might have provided a compelling interest in the immediate aftermath of legalized discrimination, the country is many years beyond that. Were legalized discrimination allowed to stand on this basis, it would be an exception swallowing the rule that all are entitled to equal protection of the law. This is an additional reason to overrule Grutter.

Most recently, ABA has proposed getting rid of the law school entry exam requirement (usually the LSAT, although ABA also deems the GRE acceptable). Test scores are a key metric by which courts have identified discriminatory admissions treatment, and has certainly been cited by the SFFA petitioner.

In preparing to dump the entrance exam, ABA appears to be laying the groundwork for evading a ban on discriminatory admissions, should the Supreme Court overrule Grutter.

The ABA is fulfilling its primary duty: the advancement of wokeness. It is to law what CNN is to journalism.

Racism is at the core of this movement. It is all about getting even with those smart Asian kids.

Poor kids are just as smart as white kids.

The ABA is a manifest disgrace. Just another slavish shill for the Dumb-o-crats’ utterly inequitable and unconstitutional racism.

Diversity of thought, opinion and experience would actually provide exactly what the ABA claims is offered by use of their preferences. Diversity based on outward appearance; race or gender do not provide intellectual diversity. Choosing another son or daughter of well educated parents and the product of the same small pool of private schools isn’t offering up intellectual Diversity no matter their appearance.

Intellectual Diversity is what they describe as both valuable and as their goal, what they deliver is an exterior wrapper of different shapes, sizes and colors, all surrounding the same product. It’s like a basket of Easter eggs. They may be different in appearance but the product inside is the same and not diverse at all.

Diversity at the expense of competence.

It’s not diversity if it doesn’t extend beyond skin deep. MLK was pretty clear on this point.

The ABA has become ‘obama’, which is synonymous with drek.

What would be better: fighting to reform the ABA so it does its job properly instead of what it has become, or having another (several?) organizations of accreditation so that the ABA is less powerful?

My dad came here from South China, just before the Great Depression; 12 years old, alone, and not speaking English. But it was not illegal immigration because immigrants are people, human beings. Due to the Chinese Exclusion Act, Chinese were defined as not being people. Until 1943 when the Chinese Exclusion Act was repealed [because the KKK was attacking Chinese airmen in Colorado to learn to fly B-24 bombers alongside us.]. When we became people, although overage my dad enlisted and earned his citizenship for his leadership in combat. I was able to become a citizen the easy way. I was born here.

Apparently, we are on our way back to a Chinese Exclusion Act.

Re: existence of bias in the justice system is “undeniable”, claiming that prosecutors give harsher plea agreements and judges give longer sentences to black defendants

The idea of “three strikes” in CA was that repeat offenders are more dangerous to the community and the community deserved longer protection from such individuals. Have these ABA folks not looked at the TV lately? I expect that, on average, Black defendants have much longer criminal histories.

Here are the ways to deal with this

1. The Bush Era corporatist/Libertarian method-Just post outrage on the internet but effectively do nothing

If it is your letter alone he will write back to you that there is nothing we can do about it without further support. If thousands of people nationwide do it and it is followed by more thousands there is a lot the state legislature could do to make this organization very uncomfortable.

So do your part by writing to your state house reps (the redder a state you are in the more important you do it).

I think we need to start showing up in person for a face to face.

Of course the ABA is saying that. The ABA has been a captive of the left for decades now. Since at least the 1980s, and probably earlier.

Every racist there ever was thought they were doing it to make things better.

No one ever calls it what it is: Racially Discriminatory College Admissions.

Fifty years of institutional racism, which even the US Supreme Court has recently given its stamp of approval on.

What, no calls for “reparations”?

Brought to you by the leftists that point the finger at everyone else.

Soft bigotry indeed. Blacks should be pretty peeved that they are being treated like stupid children.

That was then, this is now. The Democrats have brought racism back. Again.

They have their knee on the neck of MLK Jr. The country can’t breathe.

What’ s always struck me about this is that MLK presented this in terms of his own PERSONAL family conditions.

Easier for the liberals/leftists to simply dismiss that inconvenient “content of character” phrase if they aren’t forced to picture those four little children.

I feel sorry for the few really brilliant black lawyers and doctors. With this policy, nobody will be able to tell them apart from the stupid tokens. Given what lawyers charge, I will walk away from any firm that assigns me a minority attorney.

Marcuse is laughing in triumph.

The ABA like far too many state bar associations has gone full tilt woke.

Segregation today, segregation tomorrow, segregation forever. So said a DemoncRat governor. The DemoncRats today are following that creed, as they always have, but today they dress it up like lipstick on a pig by calling it DIE, diversity, inclusion and equity. Our goal of equal rights for all will surely die if we continue down the path of DIE.

The first point is the trial court, which heard actual live testimony, findings of fact was the UofMich law school had a de facto quota system, and that the diversity argument was bogus.

As the trial court found in the findings of fact, there was in fact a quota. Same with harvard – except the trial court and CA1 somehow disavowed the existance of an obvious quota

The word “diversity” is not in the U.S. Constitution. Based on the Dobbs decision and the current make-up of the Court, I anticipate affirmative action in college admissions will be eradicated. Thankfully.