“Most recently, the [ABA] Council adopted new ‘anti-bias’ educational requirements as part of its accreditation standards.” 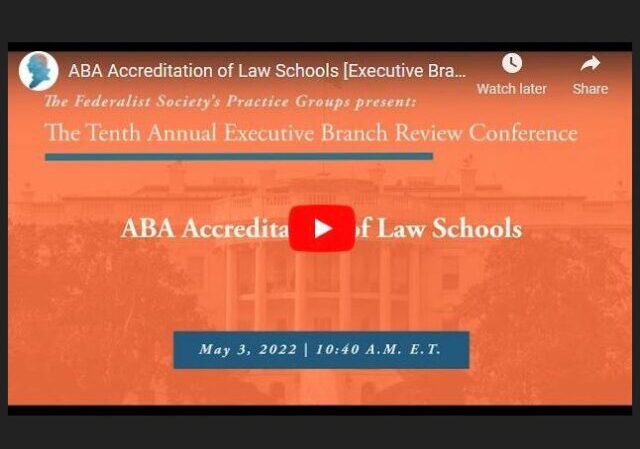 This morning at 10:40 a.m. through Noon I’ll be participating in a panel discussion at The Federalist Society conference on whether the American Bar Association should be stripped of its monopoly power on accrediting law schools in light of mandates recently passed requiring, among other things, race-focused study for law students, and a pending proposal for “equity” focused education initiatives for students and faculty.

Johanna Markind, Esq. and I wrote about this at Real Clear Politics last February, ABA Forcing Wokeness on Law Schools:

Legal education is about to undergo a revolutionary change, with the American Bar Association poised to mandate race-focused study as a prerequisite to graduating from law school. It’s another instance of woke ideology being forced on the nation, and may necessitate that states revisit the ABA’s government-granted near-monopoly accrediting power.

The U.S. Department of Education provides oversight of postsecondary institutions or program accreditation by reviewing federally recognized accrediting agencies. There is one such agency for accreditation of legal education institutions or programs: The American Bar Association’s Council of the Section of Legal Education and Admissions to the Bar. The Secretary of Education, by law, is the official responsible for recognition of accreditation agencies based on her determination that the agency is a reliable authority as to the quality of education or training provided by the entities and programs the agencies review. The Secretary of Education has exercised that authority to recognize the ABA’s Council as the single accreditation agency for legal education. The ABA has held this position since its adoption of comprehensive standards in 1973–nearly fifty years.

But the ABA writ large is an organization in decline as its substantial drop in membership–and resulting revenue–demonstrates. At the same time that ABA membership is declining, the ABA’s public and official positions on cultural and divisive issues remain. And now those positions are taking root not just in the ABA’s policy bodies but also within the Council itself. Most recently, the Council adopted new “anti-bias” educational requirements as part of its accreditation standards.

What UnCivilServant said. (I can’t think of a more eloquent way to put it.) Oh, and if the next question is “should the legal profession abolish the ABA by majority vote of all licensed lawyers in the country?”…. the same answer.

ABA is no longer an objective, apolitical, civil organization.

For me that doesn’t mean they should be stripped of their monopoly accrediting power.

That means they should be stripped of their accrediting power.

It has not been that for over 50 years if ever.

Well, if it is possible, do it now. If you wait, the way things are going, it will not be possible in the future.

I checked the ABA website this morning. Nothing posted about leak of SCOTUS draft opinion. I predict that ABA’s position will closely mimic the left’s.

Bear market. Batten down the hatch.

The ABA should not have a monopoly on accreditation. The abuse of power coming from a monopoly is too great to resist. More competition in accreditation will help insure a balanced legal system.

If ABA membership is declining, answer the question, “Why?”

That may prove more enlightening than a debate on the ABA accreditation monopoly per se and would definitely answer the debate on stripping the ABA of said monopoly.

Education is not one of the enumerated powers delegated to the federal government. Return accreditation to the states where it belongs.

If the states were smart, they would recognize that the ABA is hopelessly politicized, and would refuse the ABA any role in accreditation.

Now let’s not debate it … let’s focus on making it happen.

It is absurd this far left parasitic organization has any say at all.

The Department of Education should be abolished.
It has no valid role under our Constitutional Government.

AMA is doing the same thing. I assume every licensed profession will eventually have such requirements, as well as loyalty oaths.

I would go further. I don’t think that membership in the Bar should be required for someone to practice law. It can be a voluntary certification, like membership in the Better Business Bureau, or certification from Underwriter’s Laboratory.
Abraham Lincoln never went to law school, but Bill “It Depends on your Definition of is” Clinton did. Did our legal system improve as a result?

The ABA is a voluntary bar association that only promotes a liberal agenda.

This is a strong yes. The ABA is nothing more than an extremists liberal think bank. Very anti Conservative, anti Trump and anti police. An example is look what they did to the Texas Bar President who was pro Trump and openly pro police. The ABA needs to go