The Jerusalem Post: “More than 70 rockets were fired from the Gaza Strip into southern and central Israel on Friday night.” 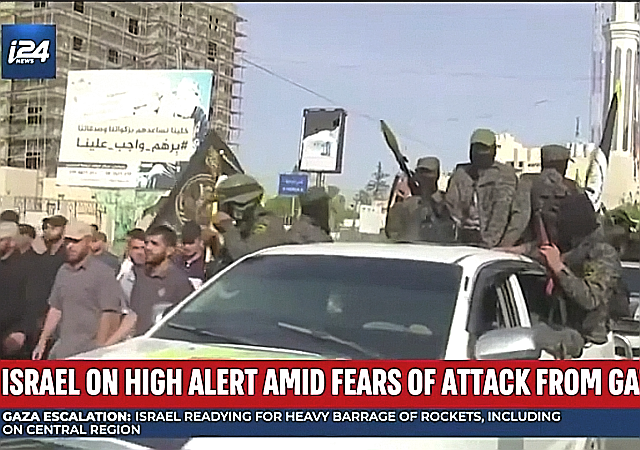 “More than 70 rockets were fired from the Gaza Strip into southern and central Israel on Friday night, hours after the IDF struck multiple terrorist targets in Gaza, killing a top Islamic Jihad terrorist leader as well as additional operatives,” The Jerusalem Post reported Friday evening.  No casualties were reported so far.

Earlier on Friday, an IDF airstrike killed the high-ranking Islamic Jihad operative Taysir Jabari and several other terrorists. Jabar, who was directly responsible for firing hundreds of rockets from Gaza into Israel during the conflict in May 2021, was planning further attacks on Israeli civilians and soldiers at the time of the strike, the Israeli military disclosed.

An IDF official tells me this evening that PIJ is preparing to launch rockets onto the center of Israel in retaliation to Israel's operation. This would include Tel Aviv and other major Israeli cities. The PIJ is also applying pressure on Hamas to take part in their retaliation. https://t.co/XoXOVJQkkK

Rocket barrages from Gaza hit most of southern and central Israel on Friday evening as Islamic Jihad launched their retaliatory attacks over the killing of the terror group’s army chief by the IDF earlier.

The response came just minutes before 9pm, shortly after Al-Jabari’s funeral. Rocket alert sirens rang out in most of south and center, including in Tel Aviv and Rishon Lezion, with the Iron Dome defense system intercepting most of the projectiles.

There were reports of a rocket hitting a house in the southern city of Ashkelon, but injuries were reported.

In face of relentless rocket fire, the IDF Special Forces are engaged in counterterrorism operations inside Gaza aimed at taking out the terror infrastructure belonging to the Palestinian terrorist groups.

“IDF special forces and artillery forces targeted six military posts belonging to the Palestinian Islamic Jihad terrorist organization in the Gaza Strip. A number of PIJ operatives were neutralized during the strikes,” the IDF said in a statement obtained by the Legal Insurrection. “The Chief of the General Staff, LTG Aviv Kohavi, has instructed the IDF to go into emergency mode,” the statement added.

The Times of Israel reported the ongoing IDF operation:

Footage filmed in the Gaza Strip shows a barrage of rockets being launched toward Israel, with the Iron Dome defense system interception.

The Israeli government has approved the mobilizing of 25,000 reservists to counter the mounting threat posed the Gaza-based Palestinian terrorist groups. The Jerusalem Post reported:

Defense Minister Benny Gantz approved a draft order of up to 25,000 soldiers in reserve duty for operational purposes and the IDF began calling up reservists in the Southern Command, Air Defense Array, Homefront Command and combat troops and officers.

“The goal of this operation is the elimination of a concrete threat against the citizens of Israel and the civilians living adjacent to the Gaza Strip,” Prime Minister Yair Lapid said in a statement.

They should really make Gaza feel some pain.

There isn’t a country on Earth that, having come under sustained rocket fire, incendiary balloons, and other assorted attacks from a neighboring territory, would exhibit as much retaliatory restraint as Israel has exhibited in dealing with the Hamas terrorists. Gaza should rightly have been turned into ash one hundred times over, for all of its terrorists’ persistent and implacable belligerence.

The utterly bigoted and absurd standard of self-defense that American Dhimmi-crats and European, Leftist, useful idiot dhimmis hold Israel to is manifestly immoral.

If we had only let the IDF take out Yasir Arafat and the PLO in 1982, none of this would be happening. Reagan’s worst mistake.

There are only two ways to end a war. Win it or lose it.

Now, we Americans have to do a revamp of our own polity. Wha apparently thinks they can end wars by pronouncing it. Anyone here who voted for Joe Biden? I need an apology from you for the Afghans falling off aircraft.

Your enemy has a vote if a war is going to end. What Barack Obama and Joe Biden have done is to resurrect an ancient practice known as “abandoning your allies in the field.”

It’s a practice only practiced by the worst of scumbags. But we already knew that, didn’t we?