“you can bring your ventilator and still vote” 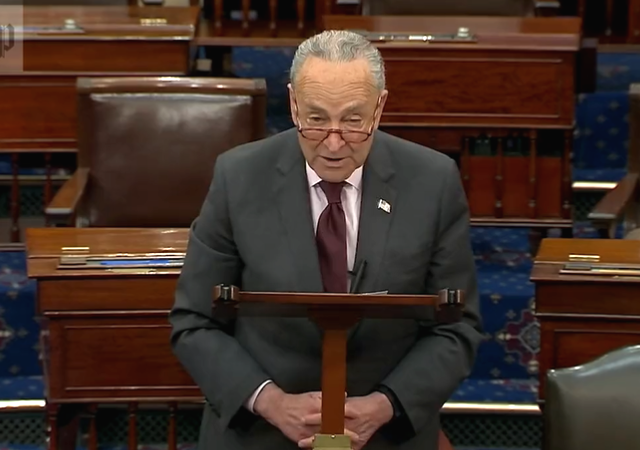 You may recall that during the height of the pandemic, Democrats were on board with pretty much any rule or restriction suggested by anyone.

Now that they’re trying to pass their spending bill? Not so much.

Senate Democrats are embracing a “Don’t Test, Don’t Tell” policy this weekend as they try to ram a $764 billion spending bill through the 50-50 chamber — knowing that even one COVID-19 positive could blow up their plans.

Senate Majority Leader Chuck Schumer (D-NY) has set a Saturday test vote for the so-called Inflation Reduction Act, which needs all 50 Democrats on board so Vice President Kamala Harris can cast a tiebreaking vote in its favor.

“They’re not going to delay it if a member has gotten COVID,” a senior Senate aide told Puck News. “Counterparts are saying they’re not going to test anymore. It’s not an official mandate but we all know we’re not letting COVID get in the way. The deal is happening. Less testing, just wear masks and get it done.”

Another source told the outlet that even if a senator did catch the virus, “you can bring your ventilator and still vote.”

If the Puck News report is true, Democrats are willing to potentially expose their colleagues to Covid despite spending much of the last two years advocating for more stringent Covid-mitigation strategies, including in the Capitol.

Schumer criticized Republicans in October 2020 after the Washington Post reported that GOP advisers were suggesting that voting on the Supreme Court nomination of Amy Coney Barrett could feature “a system in which the committee vote would be held in the Senate chamber, with ill senators voting from the visitors’ galleries above the floor so they can maintain distance.”

Schumer said at the time that then-Senate Judiciary Committee Chairman Lindsey Graham “must put into place a thorough testing procedure that is in accordance with CDC best practices before hearings can take place.” He called for every senator and relevant staff to have negative tests on two consecutive days and to have completed the “appropriate quarantining period,” as well as to institute mandatory testing every day of the hearings

He said then: “Failure to implement a thorough testing approach would be intentionally reckless, and could reasonably lead some wonder if Chairman Graham and Leader McConnell may not want to know the results, because it could delay this already illegitimate process.”

The science clearly states that covid doesn't matter if you're in a rush to raise taxes on the middle class so rich people can buy electric cars and the IRS can conduct more audits. https://t.co/ggW1V2vgBO

You weren’t allowed to go to a loved ones funeral or visit them in the hospital but Democrats can throw away all their virtue signaling covid protocols because they want to raise your taxes. Got it. https://t.co/EsXbM3uJgk

What a shock. They jettison their bullshit theatre the second it’s no longer useful to them. Notice how most of them don’t even bother pretending that the masks do anything at this point?

When not acknowledging they made everything up. Clown nose off.

The clown nose goes on and it’s gospel.

Democrats, who pull their masks tightly over their eyes, wear heavy duty blinders and ear plugs in both ears, care nothing about anything except their own agenda.

Rona is bad mmkay, but we need to get important things done mmkay? You kids will understand when you’re older. Now go back to class before I assign you to detention for interrupting the grown ups mmkay.

Republican pols as always. more than willing to bend over and grab their ankles.