“Hell no. Hell no,” Goya Foods CEO Bob Unanue said at the time when asked if he planned on bowing to cancel culture mobs and apologizing for his praise of then-President Trump. 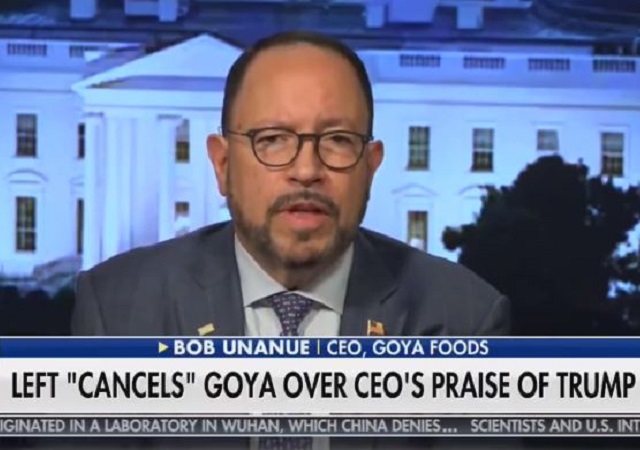 Back in July 2020, Goya Foods CEO Bob Unanue came under fire from The Usual Suspects after he dared to praise then-President Donald Trump during a White House event announcing a “Hispanic Prosperity Initiative” that would, according to the Executive Order, “improve Hispanic Americans’ access to educational and economic opportunities.”

During his remarks, Unanue told the crowd of Hispanic business leaders and politicians, “We’re all truly blessed at the same time to have a leader like President Trump who is a builder.”

“And that’s what my grandfather did: He came to this country to build, to grow, to prosper,” Unanue continued. “And so we have an incredible builder. And we pray — we pray for our leadership, our president, and we pray for our country that we will continue to prosper and to grow.”

For this, Unanue received notice from Democrat politicos and self-important liberal celebrities alike that they were on the march to cancel him and his company after nearly 85 years of service to the Hispanic community.

But no matter how loud the calls to boycott got, Unanue remained undaunted, telling Fox News in an interview a few days after the calls started that he would not back down.

“Hell no. Hell no,” he told Laura Ingraham when pressed on if he would apologize for standing with Trump.

Americans who are sick of cancel culture mobs also sprang into action, with support pouring in for Unanue and the Goya Foods brand. Not only did Goya’s Facebook page gain over 100,000 new followers in a 24-hour timeframe after the outrage erupted, but more people pledged to #BuyGoya and acted accordingly:

Six months after the dust-up, Unanue revealed that sales had been so good (“our sales actually increased 1,000 percent”) since Rep. Alexandria Ocasio-Cortez issued the boycott rallying cry that Goya at one point named her their honorary “employee of the month,” which significantly triggered the socialist Congresswoman.

In an update to this story, a new study on the effectiveness of social media boycotts and buycotts confirmed that the campaign to cancel Goya ultimately did not hurt sales:

Analyzing purchasing data from market research company Numerator, they found that Goya’s net sales rose by about 22% during the two weeks after the controversy erupted. The researchers also examined county-level election results from the 2020 presidential season and saw that sales rose far more in Republican-dominated counties than in Democratic counties.

In Democratic-dominated counties, where the Goya brand has traditionally been more popular than in Republican areas, sales also temporarily increased despite the push to boycott, the researchers found. Boycotters in heavily Democratic counties were overshadowed by buycotters, who drove a slight short-term increase in spending on Goya products.

Sales data showed that about three weeks after the protests began, Goya’s overall sales reverted to pre-boycott levels, likely indicating that the media had moved on or consumers had tired of the controversy.

Because the left has to politicize everything, companies feel pressure in the immediate aftermath of “controversies” to cave to the mobs hoping they’ll leave them alone. But as history has shown us, you give an inch with the far left, and they’ll take a mile – and more.

In my opinion, the best thing for companies to do in these situations instead of capitulating is to try and tough it out if they can. Eventually, the uproar will blow over, and the media will lose interest and move on, as the study indicated was the case with Goya.

The moment you bow even in the slightest way to the mob, they know they’ve got you. This is why, as Dana Loesch once said, you should “Never bend a knee to the rage mob. Ever.”

This is good news, and shows that cancel culture is starting to backfire.

Newsom just ensured a DeSantis victory over Crist. What an buffoon. Newsom is so insulated and disconnected from not only California voters but from the rest of America. Go ahead Hair Gel! Spend $10 billion running for POTUS! He is about to learn how expensive it is to sell cancer.

Studies show that you can’t buy your way to a dramatic shift in political landscape no matter how much you embezzle through campaign fund war chests.

In other words, no amount of California money is going to turn Florida into the left coast shithole. New York should also take notes.

I started buying their products after all this. The salsa verde is really good.

I just bout two products yesterday. Whenever I go by their section I try to remember to support them

When the original dustup occurred my wife switched to the Goya brand for certain items.

Standing up for freedom gets rewarded.

How can you label as liberal people who threaten free speech by threatening to cancel someone because they disagree with what he is saying? That is truly Orwellian.

Well, technically, they aren’t using the government to do it, so it’s not Orwellian. However, give them time and they will find a way to make it so…they are already trying to weaponize their beliefs with the full power of the executive branch.

I thank the leftists for introducing me to Goya. It’s a very good product!

But didn’t his board eventually force him to back down? I seem to recall that happening.

No. His board apparently did admonish him for his post-election 2020 comments claiming Trump won (which is understandable given the utter lie that is). But It is a private company. CNN claims the board had views of his praise of Trump earlier, but only quoted “sources”. Who knows what really happened at the board.

I seem to remember that happening at almost the same time, but not to Goya. It was somebody in Virginia or the Carolinas, I think.

I saw a Goya product that I had not seen before at the store the other day, and the left’s little escapade in activism convinced me to buy it.

NJ-based. They’ve always been known for having a complete line of really good products (like Heinz but 150 years later). Also, they are just another example of how Latino-Americans have become such a strong part of our American economy, culture, etc.

Exactly the same thing happened when the left went after Chik Fil A. The lines just got longer. A lot longer. Created a hell of a mess.

That reminds me, I have to pick up a few things at the grocery…