Our “devout” Catholic president won’t do anything about the continuing attacks on Catholic churches and schools. 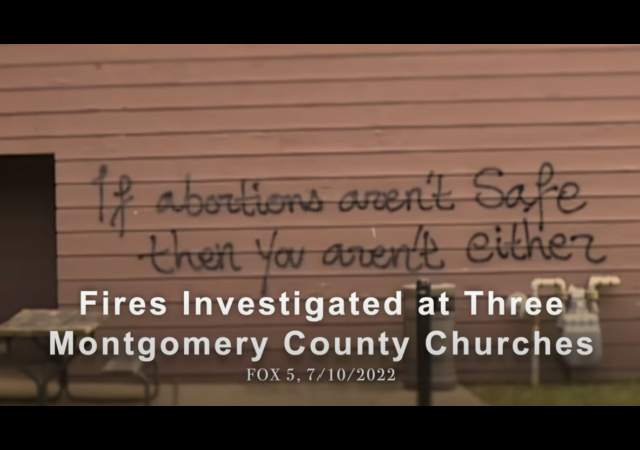 “Devout” Catholic President Joe Biden does not appear to care about the rising violence against Catholic churches and schools since the Supreme Court overturned Roe v. Wade.

We knew Roe v. Wade would disappear thanks to someone leaking Justice Alito’s opinion. Pro-abortion groups pushed their followers to engage in a “summer of rage” in response to the eventual ruling.

CatholicVote released a $1 million ad targeting Biden and his Department of Justice for ignoring the violence against Catholics.

“The American people are disgusted by the inaction of our Justice Department,” stated CatholicVote’s Joshua Mercer. “This ad sends an important message, calling on our lawmakers to demand action against this vicious campaign of targeted violence against Catholics.”

CatholicVote invokes President John Kennedy, our first Catholic president. The ad shows videos of Kennedy condemning and taking action against those who attacked black churches in the South.

“Now churches are being burned because they protect unborn babies and women in need,” says the ad.

Then the ad shows “our second Catholic president” encouraging pro-abortion groups and people to “Keep protesting, because keep making your point.”

Catholic News Agency has written about at least 93 incidents against Catholic churches and schools and attacks on pro-life organizations and pregnancy centers.

CatholicVote and others asked Attorney General Merrick Garland to investigate the attacks:

In June CatholicVote was joined by a number of other leading organizations in sending a letter to Attorney General Merrick Garland demanding action.

“We, the undersigned representing millions of Americans, are writing to voice our concerns over the increased attacks against churches, pregnancy resource centers and pro-life organizations in the aftermath of the leaked draft opinion in the Supreme Court case Dobbs v. Jackson Women’s Health Organization,” the letter stated:

In December of last year, the Department of Justice was asked how it was investigating the repeated attacks on churches in the United States. The Attorney General was also asked to investigate those complaints and take appropriate action as is your duty. Since that request there has been public silence.

After all, I thought Biden, Garland, and the DOJ considered domestic terrorism the #1 threat to America. Oh, wait. They’re too busy targeting domestic terrorists at school board meetings, voicing concerns about their child’s education.

As far as I know, the Catholic Church is the only church that has anti-abortion language in it.

From the Catechism: “Since the first century the Church has affirmed the moral evil of every procured abortion. This teaching has not changed and remains unchangeable. Direct abortion, that is to say, abortion willed either as an end or a means, is gravely contrary to the moral law” (No. 2271).

Good for them and I will send them a donation. Just want to know when I am going to see similar ads put out by the Republican party? Am getting more pissed at the Republicans everyday.

Man, I get a lot of down votes taking that position too. I’ve hated Republicans since Bush ’41 hijacked Reagan’s second term, sprayed the WH clean of all traces of Reagan once installed and declared the New World Order. It’s been all downhill since then… until Trump.

Don’t know why this got three downvotes because what you’re saying is demonstrably true. The GOPhers are not putting up a fight against any of this.

It would really help if Church leadership would return to focusing on focus on doctrine and get out of politics. The US Council of Catholic Bishops in particular should be confronting Pope Brandon for one thing and end their political involvement over pro-open borders and sanctuary cities.

Just recently, Nancy Pelosi was banned from taking communion over her incessant pro-abortion by San Francisco Archbishop Salvatore Cordileone. A few weeks later, she was receiving communion in the Vatican less than 30 feet away from Pope Brandon. Hello?

It’s time for the CATHOLIC (look up what that word means) to be catholic again. Is you is or is you isn’t? Or is it flexible based on “feelings” or political convenience? There much more passion aimed at those like me who would like to return to the traditional Latin mass with all of its rich transcendent ritual and splendor than there is for enforcing Church teachings. We should start by getting a Catholic pope and getting rid of the global mafia organization running things.

They lost me decades ago.

All I have to say is that they brought it on themselves.

I used to be a pro-abortion “Catholic.” I regret it every day. I went to confession and spend as much time as I can to make up for my old days. That group is disgusting and so are Catholics who vote for pro-abortion people. However, lots of Catholics vote for pro-death penalty, too. I love that our archbishop spends an equal amount of time and resources to fight against abortion and the death penalty.

The Catholic church is still heavily supportive of the Democrats, even though all of their policies harm the church and catholic schools.

See the Blaine amendments, which prevent any state money from following the students if they choose to go to a parochial school. You effectively pay twice. On the good side, this prevented parochial schools from having to close during the “pandemic.”

I’m glad I live in Oklahoma! I hate that people have to pay twice. It sucks, especially in Oklahoma where the public education system sucks so A LOT of non-Catholics go to the Catholic schools because they’re so good.

Any group that joins the Demonrat party is a big fool. If you have a beef or a heart’s desire and this group of thugs endorses either in order to get your vote, your soul has been already been sold. Deceit is how they hook in the gullible.

In the end, when full throttle power has been attained, they’ll come after EVERY. SINGLE. ONE. OF. US.

So Gay, Catholic, Blacks with low IQ, Trans, etc. you’re NOT safe because you were stupid enough to give them your vote. You have merely enabled these sub-humans to get the world population down by 70 to 90 percent.

How happy will those *voters* be with their personal views when they’re being squashed like a bug or sprayed with plague chemicals?

Catholics stand up to Diversity, Inequity, and Exclusion (DIE) doctrine, and human rites performed for social, redistributive, clinical, political, and fair weather causes under the Pro-Choice ethical religion of the Progressive Cult/Corporation/Clinic (PC).

At least the penmanship spraymanship of the graffiti is decent.

I thought you would like to know that the Lutheran Church – Missouri Synod is expressly against abortion. LCMS is well represented at the annual March for Life.

Sadly, the same cannot be said for the Evangelical Lutheran Church of America.

It was pounded into me big time that JFK was our first Catholic president. I guess when he broke that glass ceiling I just considered it no longer an issue, and I just stopped paying attention. It never occurred to me until reading this article that Biden is indeed only our second Catholic president. What a way to pull down the class average.

Words against me are violence. Violence against you is mostly peaceful.

In my mind, abortion is a strike against morality. I am NOT Catholic, but what person of ANY religion thinks that the commandment ‘thou shalt not kill” does not cover abortion? Are babies of another species until they are of sufficient age to be called humans? It’s truly mindboggling to me that some people do such mind gymnastics as to see the problem as anything but murder. Does the new life not cease when you abort a human? And with all the contraceptive methods available today, is there really an excuse for a woman becoming pregnant? There’s even a “morning after” pill if the woman is careless. And let us not forget the possible precautions that can be taken by men as well. For these reasons I see abortion as a sacrifice… a sacrifice to Baal. You can read about that in the Bible.

Perhaps advocacy for advantage is a distasteful too much. But, methinks advvocacy for not getting torched is not as far as that. Indeed, politically seeking equal protection seems a mild reaction to extortion by violence.

“Nice church you have there. Would be a shame if anything happened to it.”