Two people were found dead in a car in a driveway. 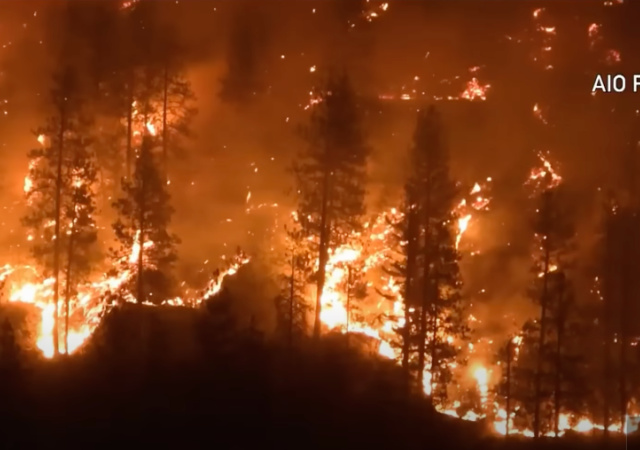 The McKinney Fire in northern California that started on the 29th has already scorched over 51,000 acres. Authorities have not contained any of it.

The fire is also inching towards Oregon. Gov. Gavin Newsom declared a state of emergency. 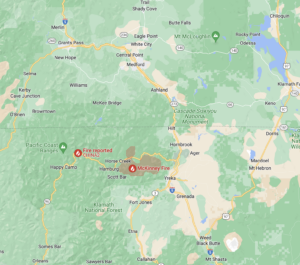 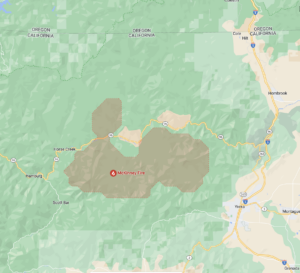 Hot, windy, and dry weather continue to feed the fire. The clouds caused by the fire have produced their own weather, producing lightning strikes that start other fires:

There’s no single reason why the McKinney Fire was able to experience such explosive growth so quickly. Like we said before: Ongoing drought conditions have emptied reservoirs and created a bulild-up of dead ground vegetation, all in the presence of hotter-than-average temperatures and low humidity levels affecting much of Northern California.

Combine the McKinney Fire’s intensity with the difficult-to-access environment it’s burning in, and it’s no wonder why it’s being called a “very dangerous fire.”

“It’s a very dangerous fire — the geography there is steep and rugged, and this particular area hasn’t burned in a while,” said Tom Stokesberry, a spokesman with the U.S. Forest Service for the region.

The area also experienced “erratic lightning storms.” Adrienne Freeman, another spokesperson, said, “The fuel beds are so dry and they can just erupt from that lightning. These thunder cells come with gusty erratic winds that can blow fire in every direction.”

Larry Castle said he loaded up a trailer with some of his prized possessions, including his motorcycle and his rifles, and he, Nancy and three dogs headed to Mount Shasta to spend the night at their daughter’s house.

He was hopeful that recent brush and tree thinning projects foresters had conducted on the ridge-top above Yreka would save the town, but he wasn’t taking any chances.

“You look back at the Paradise fire and the Santa Rosa fire and you realize this stuff is very, very serious,” he said, referring to wildfires in 2017 and 2018 that burned thousands of homes and killed dozens of people.

Siskiyou County sheriff’s said two people were found dead in a car “in a residential driveway inside the McKinney Fire zone in Northern California.”

Authorities found at least 60 hikers on the Pacific Crest Trail. The hikers were not in danger, but the fire is unstable and could change anytime.

Oregon has alerted its citizens since the fire is only 10 miles south of the border. The state also has to worry about fires in Idaho and Montana.

Activity on both fires moderated into the evening as a smoke inversion settled over the fire. The fire became active again at about midnight. Crews were actively engaged in structure protection overnight. https://t.co/5KSqlQ0oC2 pic.twitter.com/RQ0xWcQYd3

#RedFlagWarning remains in effect for Siskiyou County from 2 pm to 11pm for abundant lightning on dry fuels. This is #CriticalFireWeather so use caution outdoors. More tips: https://t.co/upBwccxXFO pic.twitter.com/2M6oRa24bz

Forests that are unmanaged by modern principles of conservation are left to their natural cycle. That means fires that rage through ladder fuels until the fuel is gone. Occasionally that means very large fires, especially when the natural cycle of drought isn’t accounted for.

Mother nature is an uncaring mistress. The fires clear out the debris, new growth begins with grasses and flowing plants, only the strongest trees survive if any. Fire is actually necessary for some species of tree to grow and propagate. That’s what a ‘leave it alone, don’t interfere, let nature take its course’ strategy looks like. Why the surprise and frustration with the entirely predictable result of these policies from the folks who imposed them? It’s a sham, they are pretending not to know.

I grew up with annual control burns and fire breaks.

Liberals grasp the concept that if Mother Nature was capable of doing all this “naturally”, Adam wouldn’t have been created to manage the land but they refuse to acknowledge it because it directly opposes their world view and agenda.

We, as stewards, simply replicate the natural process on our terms in a less destructive manner. There are some very ignorant people who claim to be environmental advocates. Some willfully (refuse to learn anything that contradicts their ideology), some skillfully (lie about what they know) and some really don’t know any better.

You would think these gaia loving folks would have a better understanding of the natural order; birth, death, competition for resources, winners, losers, adaptation and extinction.

It is even worse. The let alone policy follows a time period of intense fire prevention, allowing fuel to have unnaturally built up. What were small ground fires become canopy fires, now.

It’s obvious California does not mind these fires happening. They do nothing to help prevent them. They could but they don’t. Letting the state burn is good because GLOBALWARMINGISKILLINGUS

This fire is caused by the climate emergency and the only way to extinguish it is with a massive ant-inflation, deficit-reduction tax containing electric vehicle subsidies. That’s right, Mr. Fireman, hang up your hose!

Yes, even in non-drought years, that area is a tinderbox.

That’s a beautiful and remote area. Lots of golden eagles. We’ve been down CA Hwy 96 through there, but only once. As I recall, the forest cover varies quite a bit. And yes, it’s almost always very dry there in the summer and early autumn.

About the best way to manage these wilds is to allow logging to resume and strategically harvest.

This would create fire-breaks and of course logging road access.

Logging used to be very big around there clear up to the spotted owl debacle.

When you took the loggers out of the forest, place horrendous regulaions on forestry management, and provide the forest service old equipment to fight the forest fires, this is what happens!
Another crises is the lack of water. Desalination of the ocean water works and Califorina liberals refuse to clutter up their beautiful coastline to get water.