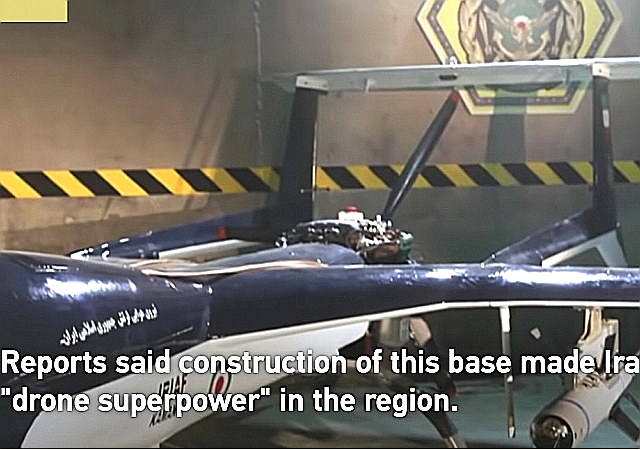 As President Joe Biden’s administration moves closer to finalizing the nuke deal with Iran, surrendering to the Shia-Islamic regime on the issue of nuclear weapons, the Iranian military is conducting a massive drone drill displaying its advanced capabilities in this field.

President Biden, who recently slammed former President Donald Trump for making the “gigantic mistake” of withdrawing from the Obama-Kerry deal, is moving towards cutting an even worse nuclear pact with Tehran, media reports suggest.

The Biden nuclear deal, which is reportedly in its final stages, will do nothing to stop Tehran’s nuclear weapons program and end up funding regime-backed terrorist and jihadist groups across the Middle East, the Israeli government warned on Wednesday.

The Iranian drone exercise, which started on Wednesday, will take place “from the warm waters of the Gulf and the Sea of Oman in the south, to the eastern, western, northern and central parts of the country,” Iranian Naval chief  Habibollah Sayyari declared earlier this week.

Reuters reported the details of the drone drill:

Iran on Wednesday launched exercises to test its combat and reconnaissance drones, state media reported, amid U.S. concerns over the possible supply of Iranian-made unmanned aircraft to Russia for use in the war in Ukraine.

The two-day war-games will involve 150 drones and will cover Iran’s Gulf coast and most of its territory, state television reported. The country’s air-defences and “electronic warfare” capabilities will also be tested against mock enemy drones.

Iran and the regional forces it backs have increasingly relied in recent years on drones in Yemen, Syria, Iraq and the Strait of Hormuz at the mouth of the Gulf.

In recent years, Iran has made such rapid advancements in the field of attack drones that Russia, which has its own massive weapons industry, is eyeing to buy Iranian UAVs and get its military officers trained in Iran.

“Russian officials trained in Iran in recent weeks as part of an agreement on the transfer of drones between the two countries,” Reuters reported earlier this month, citing the U.S. State Department.

The news agency reported on August 12 that “Iran was preparing to provide Russia with up to several hundred drones, including some that are weapons capable, and that Russian officials had visited Iran to view attack-capable unmanned aerial vehicles (UAVs).”

Iranian Drones: The Tools of Terror

Iran’s advancing drone capabilities pose severe threats to its neighbors. “Iran has recently expanded many of these bases, including those in the south along the Indian Ocean. Those drones, as well as the ones based near the Persian Gulf, pose a threat to shipping. Iran used kamikaze drones to strike at a ship in July 2021, used drones to monitor shipping and used them to harass US naval ships,” The Jerusalem Post reported Wednesday.

Noting the role of drones in Iran’s international terrorist activities, the newspaper added that “the Islamic Revolutionary Guard Corps exports drones to proxy groups and has used them in recent operations against Israel, the Gulf states and others.”

U.S. Military Strikes Back at IRGC-Sponsored Terrorist Group in Syria

While the Biden White House, following in the footsteps of the Obama administration, is poised to sign another disastrous deal with the Iranians, the U.S. military is battling to contain the Iran-backed terrorist groups in the Middle East.

Colin Kahl, the U.S. undersecretary of defense for policy, told reporters the U.S. airstrikes demonstrated that “the United States will not hesitate to defend itself against Iranian and Iran-backed aggression when it occurs.”

He said the U.S. decision to launch the strikes was based on both the nature of the militia attacks and the fact that, based on recovered drone parts, “we believe we have Iran dead to rights on attribution” for an Aug. 15 attack at the al-Tanf Garrison, where U.S. troops are based in the south.

He said the coordinated attack on two U.S. facilities at al-Tanf at the same time fueled concerns that “Iran intends to do more of this and we wanted to disabuse them of any sense that that was a good idea.”

Deir Ez-Zor is a strategic province that borders Iraq and contains oil fields. Iran-backed militia groups and Syrian forces control the area and have often been the target of Israeli war planes in previous strikes.

The Al-Omari oil field is the largest in Syria, which the U.S.-backed Kurdish-led Syrian Democratic Forces captured from the Islamic State group in 2017.

On Wednesday, Israeli Prime Minister Yair Lapid spoke openly against the Iran nuclear deal being finalized by the Biden administration.

The Israeli leader noted that the deal in the works “does not meet the standards set by President Biden himself: preventing Iran from becoming a nuclear state.”

The Times of Israel reported the prime minister’s sharp remarks:

Prime Minister Yair Lapid on Wednesday urged the United States and the European Union to back away from an emerging nuclear deal with Iran, claiming it did not meet President Joe Biden’s own red lines as it won’t prevent Iran from becoming a nuclear state.

Lapid briefed foreign correspondents on Israel’s position as officials on both sides reported progress in negotiations to revive the nuclear deal between Tehran and world powers, known formally as the Joint Comprehensive Plan of Action.

“In our eyes, it does not meet the standards set by President Biden himself: preventing Iran from becoming a nuclear state,” Lapid said, while also attempting to downplay any rift between Jerusalem and Washington or Europe.

Lapid panned the EU’s negotiating position, claiming that it had reneged on its declaration of “take it or leave it” when it presented a supposed final draft of the deal, allowing the Iranians to submit counterdemands and changes. “The countries of the West draw a red line, the Iranians ignore it, and the red line moves,” he chided.

EU foreign policy chief Josep Borrell confirmed on Tuesday in an interview that Tehran had asked for “adjustments” to the draft deal.

The current proposal “cannot be accepted as it is written right now,” Lapid said, claiming it would provide Iran funds to support its nuclear program and terrorist groups in the Middle East.

As President Biden tries to outdo President Obama in sighing another disastrous nuclear deal with the Ayatollah regime, the world’s biggest state-sponsor of terrorism and jihad warfare, Iran is auditioning for a spot in the new China-Russia-led axis of evil emerging on the world stage.

As China and Russia expand their influence in the Middle East, Iran is poised to be their alley. In April 2022, China and Iran announced they would step up military cooperation. “The Chinese military is willing to maintain strategic communication with the Iranian side, make good use of the cooperation mechanism, and promote practical cooperation, so as to push the relationship between the two militaries to a higher level,” the Chinese military disclosed in its statement.

Are all those JINOs that voted for the demented doofos now occupying 1600 Pennsylvania Ave are pleased with this?

The problem is that they are, in fact, pleased. So is Chuck Schumer, Jerry Nadler and Anthony Blinken. So are my former leftist JINO friends and the former rabbi at the “Conservative” “synagogue” that I attended. The non-secular Jews voted en masse for Joe Biden. I did not. In June I attended an 8th grade graduation in Zichron Yaakov, Israel, where my son attends school. It is very difficult to look at these children, standing proudly at the graduation, and know that they will be putting their lives on the line in the Army in a short 4 years–and they know this now. This will happen not because of the Arab armies, which have mostly been vanquished, but because of Democrats, Joe Biden, Barack Obama and the Europeans, who feed the Muslim thirst for Jewish blood. The Christians will have their moment with the Muslims, a short time from now in Europe a little later in the US.

Any chance you can ask them to explain themselves?

Just like the last deal, it will never become a real treaty because the senate would never sign off.

When Trump becomes President, biden’s deal will be in the toilet.

But before the next election, Iran will receive tens or hundreds of billions in released funds. They will develop more weapons and more proxies. Their arms will reach further around the globe.

Nothing is final with Biden.

As Israel should more than likely the target of Iran’s first nuclear weapon.
But Barky, now Sundowner’s Puppeteers are trying hard to give Iran nuclear capability

Coming soon to a city near you

It’s bad enough that the Committee that dictates to Biden is destroying the entire Nation and the Western World…
But they are going to get us all killed in the process.

When their standard of “success” is Afghanistan, why would anyone expect anything better than this.

obama ordered a drone to flyover Iran at a low level and told them when and where so they could take it down with minimal damage and copy the technology. He did this because he could not transfer the technology by conventional means.

Any proof of that?

I wish there were, but I have not seen any.