England, Spain, Italy, and other countries have hit over 100 degrees with little to no rain and strong winds. 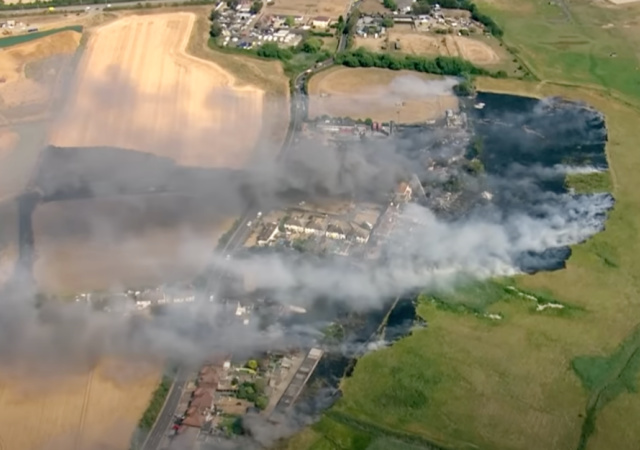 Europe is on fire as the heatwave continues. Temperatures have soared over 100 degrees, something we in the South are quite used to.

Bonedry conditions, sweltering heat, low humidity, and high winds (sounds like Oklahoma!) make fires easy to start and spread. It doesn’t have to start with a cigarette or match. Anything that can cause a spark can cause a wildfire.

British authorities put England in a “national emergency” state due to the heatwave and wildfires:

Those hoping to travel north from Euston and King’s Cross were told: “Do not come to the station.” Train companies cancelled all services because of “extreme heat causing multiple incidents across the network”.

On the roads, the A14 dual carriageway in Cambridgeshire was left looking like a “skatepark” after it warped in the heat, police said.

Parents were told to urgently collect children in the middle of the day as classrooms became unbearably hot, despite the Prime Minister calling on schools to stay open.

An ambulance control centre shut down after its water supply ran dry, while others across the country reported an increase in calls for fainting and heat exposure.

There were 90,592 visits to the heat exhaustion and heatstroke section of the NHS website – equivalent to around 63 visits every minute – on Monday as temperatures soared.

At least 13 people have died in open water since the start of the heatwave, including at least four children under 17.

Authorities in France arrested a man on suspicion of arson regarding a huge wildfire in the Goronde region:

In southwestern France, the wine-growing Gironde region saw its biggest wildfires in over 30 years and authorities said a man had been detained on suspicion of arson.

The fires have spread across 19,300 hectares (about 75 square miles) in the countryside surrounding Bordeaux since July 12, forcing 34,000 people to evacuate their homes.

About 2,000 firefighters, supported by eight water-bomber aircraft, were battling the blazes.

A fire raged on in Massarosa, located in Italy’s Lucca province:

Videos circulating online show the extent of the fire in Italy’s Massarosa which has forced fifty people to be evacuated from their homes (forty of them during the night).

Regional President Eugenio Giani said that ‘this is a terrible fire’, about 100 hectares have been burnt.

“We are worried about the right front because of the wind that is rising,” he said.

“Over one hundred hectares of woodland gone up in smoke on the hills of Massarosa,” one news site in Italy tweeted.

“Closed the link road connecting the A11 with the E80 between Lucca and Viareggio. At work 4 Canadair, 4 helicopters and 60 units of the @vigilidelfuoco. The front of fire is powered by the strong mistral wind.”

Yet another wildfire, this time in Ravensden, Bedfordshire.

Man runs for his life from wildfire in Spain https://t.co/5z5emXvln5 pic.twitter.com/mqFSGdmh7I

#ICYMI VIDEO: A car drives through a wildfire in central Portugal, where over 2,000 firefighters were battling four major fires across the country pic.twitter.com/ZWrzU9ODUV

More than 2,000 firefighters from around France were battling raging wildfires on Tuesday in the country’s southwest. The flames have forced over 37,000 people to evacuate in the past week and investigators suspect that one fire was set intentionally. https://t.co/CDwd0FL9Fc pic.twitter.com/OReDdgjegA

Europeans routinely mock the US for our almost universal use of A/C.
Of course most of Europe is north of the 45 parallel so the same or north
Montana and North Dakota.

Yeah this is the main reason… it’s easy to think Europe is just “east” of us, but in reality most of the continent is much further north as well.

Central Texas is on the same latitude as North Africa.

Europeans try to mock the US for a lot of things. Until they face another existential threat and then they get back on their knees, where they are accustomed to being.

High electricity prices may be a small part of it, but A/C was uncommon long before green policies became fashionable. Even with cheaper electricity, it doesn’t make sense to buy an A/C that in most years you’re only likely to need for one or two days, just in case there’s a once-in-a-lifetime heatwave like this.

Of course the usual suspects are blaming this on glowball warmening, but even if we were to take their claims on faith, the average global temperature has so far only risen by half a degree or so, which means that without it this heatwave would still be happening, just half a degree lower. Their prophecies of doom are for the future; they claim that we should get used to this because in the future it will be common. But even if that were true, it wouldn’t change the fact that this heatwave is natural and would have happened anyway.

Their hasn’t historically been a need for AC the climate hasn’t required it, and retrofitting A/C requires a not insignificant amount of capital investment when budgets are tight.

A blocking event, an impulse function, a record heatwave in human experience.

Blame it on Joe Manchin.

Sure. Isn’t that what “global” means?

Damn right. Unless the US Senate passes a ‘climate bill’, the planet will burn. Much like because the rooster crows, the sun rises.

Nah, everyone knows that the sun rises because somewhere in Mexico a priest rips someone’s heart out. If he didn’t do that the sun wouldn’t rise. Well known fact. (Or it once was, anyway.)

Why do you think all those Mexicans are running for the border?

Blame it on Milhouse.

What would the climate be if humanity didn’t exist?
Anyone who claims to know is a liar. Our production of CO2 is only a small part of what we do to the environment. We cut down trees and grow crops but we also stop forest fires and preserve wild lands.

If humanity didn’t exist, then who cares what the climate would be like? There’d be nobody to benefit from it, so it wouldn’t matter what it was. It might as well not exist at all.

If humanity didn’t exist Twitter would still be going strong because it consists mostly of non-human bots.

We have tonnes of evidence of exactly what the impact of humanity has been, its pretty well studied. The “Co2 is a small part” argument is really dumb, the fact is its obviously upsetting the equilibrium present in climate systems which is why temperature records keep getting broken, that’s not really disputable

You poor fat dumb bastard. Not only are you a liar, you’re dumber than dog poop.

Temperature records get broken regardless of man. That’s how it works, someplace on the planet is always experiencing a new extreme.

So now that you’re educated see if you can wipe off the dog poop.

Now you are projecting, facts don’t care about your feelings Barry. First of all the temperature increase is absolutely linked to mans impact on the climate as demonstrated by climate models that have accurately predicted the temperature rise for decades. Secondly why would temperature records get broken, what’s the mechanism for that happening because it sure isn’t natural to have decades of multiple records broken, I suppose you think it was aliens or something.

Do you actually have an argument or is ad hominem your first recourse for every conversation. Its pretty telling that you resort to that as move one. That’s a pretty telling.

I didn’t realize Pacific Gas and Electric and Southern California Electric did business outside of CA. They are the best when it comes to starting major forest and brush wildfires.

There are lots of “this is what 40 degrees looks like” posts on twitter. Of course if these clowns posted “this is what happens when its dry and some idiot deliberately starts a fire” then they wouldnt be able to keep the people afraid!

In fact the only thing that seems to have happened because of this weather is people losing their minds, once again, at the thought of sending little Cletus to school this week when its warm. Next week its school holidays here and I guarantee you those fuckers will be demanding little Cletus get out of the house and go play all day long in the heat and the sunshine!

Will someone please have a diligence attack and check the numbers in Europe for the summer of 1922? Thank you.

How are the wildfires starting? What else besides lightning can start a wildfire? Nothing that I know of. Trees don’t spontaneously combust because it’s hot outside. Without a lightning strike, it’s arson that is starting these fires.

The end times are upon us. Brandon, please issue an executive order banning use of ICE cars. We need that tenth of a degree now!

Just as I no longer care if the prog cities burn to the ground, I don’t care if the your uh pee uns entire continent goes up in smoke. They’re nothing but trouble.

Its not that hot there at all, gets hotter in CA every year – and its far more arid in CA. They’ve already made some arrests for these arsons.

But the Libtards are all trying to blame “climate change”.

What part of ‘that’s not the normal climate and temperature in those regions’ do you not understand.

Huh, nowhere in the story does it say that the largest wildfire in France was started when an EV van’s batteries shorted and burned it down.