“The criminals underground know they can get in a brawl, choke a cop and be back out in hours. Cops are putting ourselves on the line to make the subways safer, but we are feeling abandoned by a justice system that won’t back us up.” 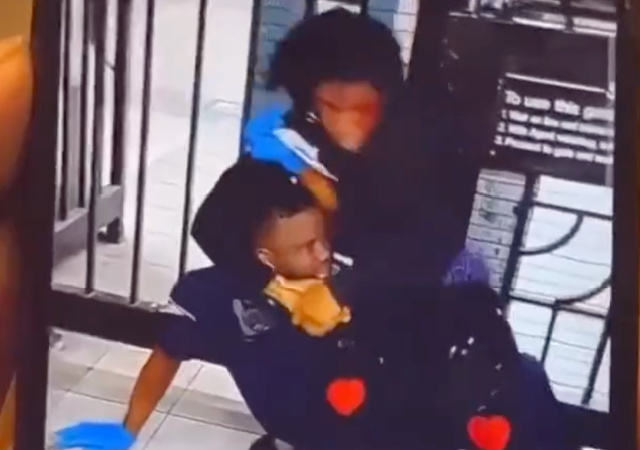 A video emerged of a 16-year-old boy attacking an NYPD cop who confronted him for alleging not paying the subway fare:

The teen, whom cops are not publicly identifying because of his age, jumped the turnstile at the 125th Street-Lexington Avenue station in East Harlem just before 6 p.m. Saturday, cops said. A 16-year-old girl who was with him ducked under the turnstile, authorities said.

The boy “became verbally aggressive for over 3 minutes with officers” before they attempted to arrest him, authorities said.

His arrest sparked the caught-on-video mayhem in which the boy began to punch the cop, who returned the blows.

The teen girl can be seen entering the fray to throw a couple punches at the officer before a female cop pulled her away and the girl sparred with her.

The fisticuffs left one side of the boy’s face completely bloodied.

Shocking video captured over the weekend in a Manhattan subway station shows youths brazenly brawling with NYPD officers. The male youth was recently arrested for illegal possession of a loaded gun & robbery, but was quickly released without bail. pic.twitter.com/IjUPZcivwi

The cops arrested the boy, charging him with assault on a police officer, obstruction of governmental administration, and resisting arrest.

The kid has a record, too. He’d already been arrested for possession of a loaded gun and robbery.

But despite the charges and his record, the boy was released on his own recognizance.

“If New Yorkers want to know why the chaos in the transit system is not improving more quickly — this is why,” fumed Patrick Lynch, president of the Police Benevolent Association union.

“The criminals underground know they can get in a brawl, choke a cop and be back out in hours. Cops are putting ourselves on the line to make the subways safer, but we are feeling abandoned by a justice system that won’t back us up.”

The teen, whom cops are not publicly identifying because of his age…

That policy has been silly for several decades. Do the deed, be identified.

Plenty of Law, not enough Order,

If you reside in an area who’s leadership decides not to keep folks who legit attack LEO either in jail or on bond you might consider moving. That cute shiny thing on the LEO’s chest is a symbol of authority granted by the community to enforce it’s laws.

It’s a matter of priorities and your safety doesn’t matter.

Kid should have been beaten to a pulp. Same for the garden tool.

Or fell down a flight of stairs at the station. 16 yrs old, probably illiterate and well on his way to being a prisoner.

Hey cops: your union have been Democratic Party sex-slaves for over 70 years.
Now reap it.

Looked like a brawl in the NHL. Why don’t the cops carry batons any more? I didn’t see one on either of their tool belts. Or something like a riding crop? Those things hurt like hell.

They do. Or at least i did and i never saw a cop who didn’t have one. Nowadays cops carry a collapsible metal baton. Only about 6 inches or so when collapsed.

See https://www.asp-usa.com/collections/batons. This is the brand i carried when i was on Honolulu PD.

Thanks. Knockoffs can be found on Amazon but are listed as walking sticks, etc., which I gather means they are not for sale to the public?

You can easily get a collapsible baton for your own use. There are certain locales where I believe it is illegal to carry them, however. I’ve got one around here, somewhere….

Look for “ASP collapsible baton”. (ASP is a brand.)

Thanks, GWB. When I went to the site NavyMustang listed, it looked to me as for LEOs only. Searching on Amazon pulled up several listings under other names – like walking sticks, canes, ski poles – and one or 2 photos were of collapsible batons but the rest were of what their title claimed them to be. The Q&A section, which included answers from the seller, were evasive – all of which suggested to me that selling those to the general public wasn’t legal – least ways through Amazon.

A lot of cops won’t pull them even if they carry them because a baton instantly makes the incident into a “Rodney King beating”. The bad takes on incidents of “police brutality” over the years have put a number of cops in the situation of voice-hands-gun in terms of violence escalation. Anything in between trying to simply lay hands on someone and having to shoot them because they’re a clear menace can get you sued into oblivion.

From the video we can all see that this is just another case of a FEMALE cop in a position she isn’t suited for. She can’t fight and is of no help, whatsoever, to the cop being mauled by the kid. Women cops out on the beat, expected to carry out actual, physical duties are a sick joke. Women have no business being cops on the street. They have even less business in combat roles (and only the sickest of societies offers up women for ridiculous positions like that).

I worked with a woman cop who was maybe 5 feet tall. During dojo training i used to swing her around for laughs. Nothing she could do about it. Wouldn’t have been so funny on the street.

At another site today I saw an article about a local on the NY subway who was verbally harassing another passenger. A third passenger decided to intervene. In the ensuing combat the intervener stabbed the harasser in the head and torso with an “unknown object,” There was a discussion of the coming rise of vigilantes. It was not critical of the existence of such vigilantes. Interestingly, the intervener may get off uncharged or at least bail free because he is melanin-enhanced.

From Ace of Spades …

The callous and vile Dumb-o-crats are happy to release violent, sociopath criminals back on the streets, where they are free to visit their predations upon the innocent, yet again.

New Yorkers can lament all they want about crime and bail laws. To find who is at fault for this state of affairs all they have to do is to look in the mirror. They voted for the government officials who put the bail laws into place and they voted for the New York County DA who will not enforce the laws. They also voted for the current incompetent mayor. Until they change their voting patterns nothing good will happen.

The escalator ride only goes in one direction. Up. The more they get away with, the more they will try to get away with.
No one’s gone to jail as a result of the November 3rd, 2020 election steal, so the lights are all flashing green for a November 2022 election steal. What have the Democrats got to lose, except the power they currently have over the people?

whom cops are not publicly identifying because of his age
This is stupid. I get the whole “don’t burden them later in life with the transgressions of youth”, but that should only apply to misdemeanors and to very small children. You beat up a cop, murder someone, commit armed robbery, the cops should be naming and shaming you and every newspaper within a 100 mile radius should be publishing your name.

The fisticuffs left one side of the boy’s face completely bloodied.
Good! That should be the result when miscreants assault everyday people, much less cops.

That cop showed remarkable restraint. That kid got off easy.

recently arrested for illegal possession of a loaded gun & robbery
“But we have to do something about gun violence! We have to take away all guns from law-abiding people so we can solve exactly this sort of thing!”

Yeah, this stuff puts the lie to all your claims of what you’re trying to accomplish. And why you make no headway with reasonable people about this stuff.

This is yet another example of the inmates running the asylum