The fire threatens the endangered sequoias. 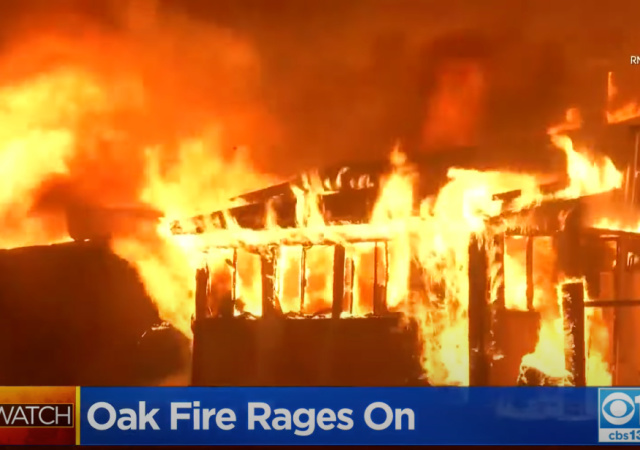 The Oak Fire in California by Yosemite Park exploded to over 15,000 acres on Saturday.

Here is a screenshot to give you an idea of where it is: 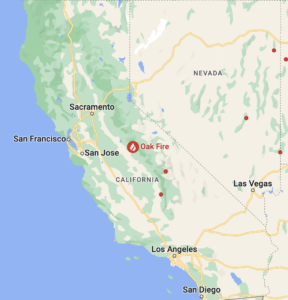 Here is a larger screenshot: 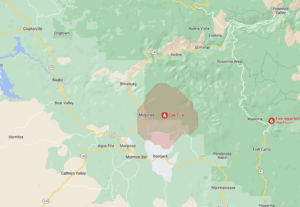 Authorities started an investigation into the cause of the fire. The spark didn’t take long to grow into a full wildfire.

The Oak Fire was sparked just after 2 pm Friday near the community of Midpines between Mariposa and Yosemite National Park. By evening, it had reached the Sierra National Forest.

In a Sunday morning update, CAL FIRE says that 10 structures have been destroyed, 5 are damaged, and 2,693 remain under threat from the wildfire.

More than 2,000 fire personnel are fighting to control the flames from ground and from air, racing against time with the fire burning dangerously close to homes and buildings.

Governor Newsom has secured federal funding to keep resources moving in. Crews from across the state have already started to arrive.

The fire caused over 3,800 residents to evacuate.

Authorities have not contained the fire at all. Resources from out of state keep coming in, but the fire is fed with hot temperatures, low humidity, and dry vegetation. The wings should die down, though, which will help a lot.

Firefighters contained 79% of the Washburn Fire, which you can see in the second screenshot. They do not think the two fires will combine.

Meanwhile, the U.S. Forest Service announced Friday it’s taking emergency action to save giant sequoias by speeding up projects to protect the trees from the increasing threat of wildfires.

The Save Our Sequoias (SOS) Act was introduced by a bipartisan group of congressman including House Republican leader Kevin McCarthy.

“The Forest Service’s action today is an important step forward for Giant Sequoias, but without addressing other barriers to protecting these groves, this emergency will only continue,” the group said. “It’s time to codify this action by establishing a true comprehensive solution to fireproof every grove in California through the SOS Act and save our sequoias.”

It’s a shame what the Dunning Kruger party has done to Liberlafonia.

Leftists are awful stewards of something they claim to love.

They are not stewards at all. They are manipulators with an agenda.

Newsom is a big a political whore as Kamala Harris: they go whichever way pays the most and requires the least effort.

This has all of the earmarks of a DeSantis/Abbott conspiracy.

As old as those trees are, and with bark 2 feet thick…
I bet they have seen several forest fires.

Newsom would best serve California by jumping into the fire.

That would make a greasy mess for a while, but it would be the first positive action on the part of Newsom.

California, by law and policy, prevents standard forestry practices that limit the risk of wildfires. It is their choice.

And those of us in Nevada must breathe the consequences of their choice.

California refuses to commit to any new water projects, they refuse to allow clearing along their power lines as needed, they refuse to be fiscally responsible.
But they are always right there with their hand out anytime they have a chance.

So how many states of emergency does that make currently in California?

When a government has to resort to ‘states of emergency’ to govern it is obviously invalid, to say the least.

“California works! So all you Floridians and Texans who want a better life can COME TO CALIFORNIA, and get to work, helping us put out a ginormous forest fire!”
Male the ad, governor! Make the ad!