The data shows the case likely originated out of the country because the person had the oral polio vaccine (OPV). 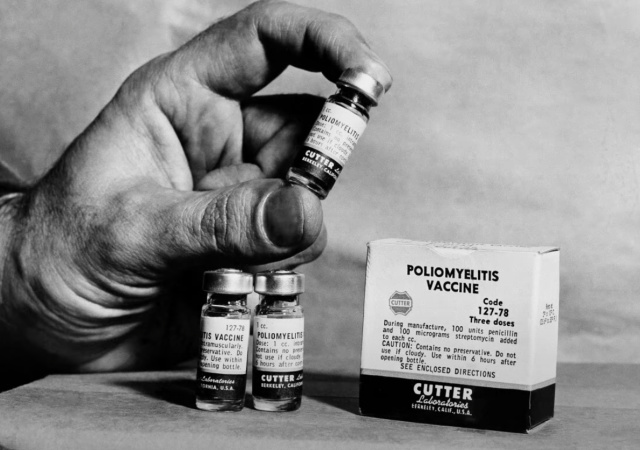 Rockland County is about 30 miles north of Manhattan.

The data shows the case likely originated out of the country because the person had the oral polio vaccine (OPV). America stopped using that in 2000:

In this case, sequencing performed by the Wadsworth Center – NYSDOH’s public health laboratory – and confirmed by CDC showed revertant polio Sabin type 2 virus. This is indicative of a transmission chain from an individual who received the oral polio vaccine (OPV), which is no longer authorized or administered in the U.S., where only the inactivated polio vaccine (IPV) has been given since 2000. This suggests that the virus may have originated in a location outside of the U.S. where OPV is administered, since revertant strains cannot emerge from inactivated vaccines.

“Many of you may be too young to remember polio, but when I was growing up, this disease struck fear in families, including my own,” County Executive Ed Day said. “The fact that it is still around decades after the vaccine was created shows you just how relentless it is. Do the right thing for your child and the greater good of your community and have your child vaccinated now.”

New Yorkers should know that those already vaccinated are at lower risk, & the polio vaccine has long been part of @CDCgov’s childhood immunization schedule, required by NYSDOH for all school-age children. ⬇️

Polio vaccines are required for all school-age children.

But if people have not finished the vaccine schedule or never received the vaccine, the Rockland County officials recommended they get one now:

As the polio vaccine continues to be included on the Centers for Disease Control and Prevention’s (CDC) standard child immunization schedule, those already vaccinated are considered to be at lower risk. Notably, the polio vaccine is part of the required school immunization schedule for all children, and therefore school-age children are vaccinated before they start school. However, individuals who are unvaccinated, including those who are pregnant, those who have not completed their polio vaccine series previously, or community members who are concerned they have might have been exposed, should get vaccinated by Rockland County – who will be hosting local vaccine clinics – or partnering health agencies and providers in the area. Individuals who are already vaccinated but are at risk of exposure should receive a booster.

“Based on what we know about this case, and polio in general, the Department of Health strongly recommends that unvaccinated individuals get vaccinated or boosted with the FDA-approved IPV polio vaccine as soon as possible,” State Health Commissioner Dr. Mary T. Bassett said.”The polio vaccine is safe and effective, protecting against this potentially debilitating disease, and it has been part of the backbone of required, routine childhood immunizations recommended by health officials and public health agencies nationwide.”

Polio is a horrible virus. It affects the nervous system, which can mess up your muscles.

It usually enters through the mouth from the hands if they’re infected with fecal matter from an infected person.

However, “[R]respiratory and oral-to-oral transmission through saliva may also occur.”

It’s highly contagious. You can spread it without showing symptoms.

Symptoms can take upon to 30 days to appear. The symptoms mimic the flu: fatigue, fever, headache, muscle pain, and stiffness. It also includes vomiting, which usually does not happen with the flu.

The last natural case of polio in the U.S. happened in 1979. The recent cases are not

Just as predicted a year ago.

Liberal insanity over the Clot Shot fake ‘vaccine’ has made a whole bunch of people not trust actual, proven effective vaccines, and is going to lead to the resurgence of a bunch of older diseases because the medical establishment continues to censor and attack anybody that dares question the mRNA bullshit.

Either the vaccine or the lockdowns or both, have thrown immune systems out of kilter.

Or it is another case of homosexual activity outside the US bringing disease back into the US. I would bet dollar to donuts that is what happened here considering the facts presented in the article.

The flood of illegal aliens coming across our border won’t help with this either. We have no earthly idea who those people are, where they came from, what their health history is, etc.

I remember how an elementary school in California wrote home to parents the kids were exposed to Handon’s disease. (Leopracy)

The risks of the oral polio vaccine have been known for many decades.

This is an “attenuated virus” vaccine: the virus is alive (so much as any virus can be said to be alive) but it is no longer virulent. So if you take it you will get a (very mild case of polio. You may also inadvertently spread that attenuated virus to those who have not been vaccinated.

The problem is, there remains a small risk that the attenuated virus will regain its virulence. From memory, this happens something like six times per million vaccinations.

The alternative is a vaccine in which the virus has been killed and therefore can not infect anyone. It’s somewhat less effective against polio, and to get immunity you must be directly vaccinated, but in a world in which polio has become so rare that a single case is newsworthy, a vaccine with minimal risk makes more sense.

This is not exactly new science, it’s half a century old. And it’s surely not necessary to come up with gaseous speculative theories to explain what was well explained a very long time ago.

Betting a person never to get the vaccine.
Have said a few times in different places I had a polio vaccine once and never had it, people get Covid shots and boosters and get it.

Have the NIH doctors been in the lab again?

“It appears the person had a vaccine-derived strain of the virus, perhaps from someone who got live vaccine — available in other countries, but not the U.S. — and spread it, officials said.”

The person in question is an unvaccinated adult.

He is not unvaccinated according to this post. He had the oral vaccine possibly outside the US.

The patient was identified as an unvaccinated young adult (ABC)

The case occurred in an unvaccinated adult (UKTimesNews)

He was not vaccinated. Polio was transmitted to from someone else who had recieved oral vaccine. According to this post this “is indicative of a transmission chain from an individual who received the oral polio vaccine.”

“…..means it was spread from someone who had received the oral polio vaccine—which is still replicable to spread to others.” (Q104.3)

He caught it from somone who received oral vaccine.

Yes, the recurrence of old world viruses has just sprang up do the the Vaccine’s destruction of people’s immune systems.
You polio shot was just rendered useless.
Look forward to many more.

When the borders are completely open, and we don’t know who is coming in, we also don’t know what diseases or other ailments they’re bringing in until it’s too late

Rockland county was the location of the 2018 measles outbreak (over 300 confirmed cases). This case of polio was probably imported from the same place the measles index case patient got that virus.