Blogger: “I am a liberal Democrat. And it’s war against the Republican … I’m going to be merciless with her.” 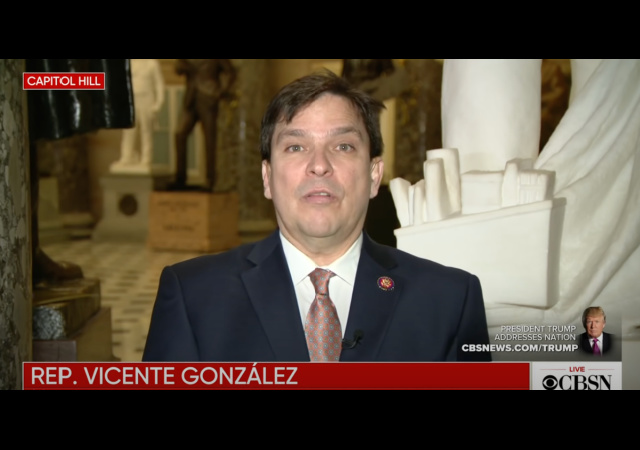 McHale has called Flores “Miss Frijoles” 21 times since the campaign wrote the check. But McHale has not published any González ads:

On July 2, McHale published another blog post quoting an individual identified as Maclovio O’Malley as having said, “Who does this Mayra Flores think she is? Somebody said she was crowned Miss Frijoles 2022 in San Benito. She isn’t in Congressman Vicente Gonzalez’s league. She isn’t even in the bush leagues unless she doesn’t shave her p**sy.”

The thing is, McHale published articles with horrible statements against Flores before González paid him:

On May 13, Jerry McHale, who has referred to Flores as “Miss Frijoles” and a “cotton-picking liar,” questioned, “DOES FLORES WANT TRUMP TO COME & TAKE HER P**SY???”

In a June 18 post, McHale, describing a conversation he had with a friend, wrote, “Maclovio O’Malley, la Voz de los Vatos who wants me to put an ad of Vicente Gonzalez in front of my businesses although I have to admit that I would risk my relationship with lovely Amanda for a night with Mayra Flores, says that the Oyster Bar food smells like rotten p**sy. And I have had more than my share of rotten p**sy that I don’t want to endure that culinary catastrophe again.”

But, I love frijoles & I grew up eating frijoles. I am not embarrassed of my upbringings & frijoles w/tortillas de harina is simply the best. Here's to Miss Frijoles 2022 #TX34 pic.twitter.com/7z5SRGCfUv

González’s campaign and McHale denied the payment was for this kind of post:

They both told NBC News that the timing of the attacks were coincidental, that the congressman didn’t pay for any of the inflammatory posts, know about them or have any control over them.

“Of course, the congressman is against referring to Rep. Flores as ‘Miss Frijoles’ or a ‘cotton-picking liar’,” Gonzalez’s campaign manager, Collin Steele, wrote in a text message to NBC News, echoing the state Democratic Party chair and other Texas Democrats who denounced the language as well.

However, McHale didn’t hold back: “I am a liberal Democrat. And it’s war against the Republican … I’m going to be merciless with her.”

A CNN columnist said Republican Latina candidates like Flores are “not a real deal.”

Flores won the 34th District of Texas seat in a special election last month. She’s the first Republican to win that seat since 1870. She’s also the first representative born in Mexico.

González, who currently represents the 15th District, is challenging Flores because his district is now Republican-leaning.

A liberal being a liberal doing what liberals do.

Nothing new or special

Insulting women and Hispanics. I guess she must have strayed too far off the Democrat Hacienda.

I hear a giant backfire – and it isn’t Michelle Obama in the bathroom.

This is why they always accuse us of being racists. Because they think we are like them. We think they want freedom because we think they are like us.

Good to see the communists haven’t changed a bit since the 1820’s. They’re still the same racists they were when the spawned the KKK.

It has been a banner week for leftist outreach to the Latinx community. First Harpie Jill calls Latinos “breakfast tacos” and Mrs. Flores’ opponent hires this clown.

According to Jill, you can get pretty good breakfast tacos in your local Bogota.

Pwodway… isn’t that a bedroom community north of San Diego?

She’ll win. González will be nothing but a has-bean.

good one (caught that)

Dems are against “hate crimes” unless of course it pays to take one out on their political opponents.

The old expression “I would not have told that one out loud” comes to mind.

“Of course, the congressman is against…”
Uh huh. Of course not. Wink, wink, nudge, nudge, say no more.

Just the Congressman using a straw man to get his point across–I see no media or other liberals called him out for this.

Mmmm, frijoles is but one of many tasty ingredients we use to make breakfast tacos in Tejas.

You go girl, you’re clearly over the target!

idk, if i were her or her campaign i’d highlight this link – the terrible comments of this d bag who was paid to do it by the dem. I’m disgusted and i’m sure the general public would be as well

More racist misogyny from the Democrats? Spun right (no pun intended), this could cost the Left a lot of support. Who wants this sort of extreme bigotry anywhere near the levers of power?!?

This Dumb-o-crat racist confirms only for the umpteenth time that the vile Dumb-o-crats are the most unabashed and vicious racists in contemporary American society.

He hired the guy and “coincidentally” the racist started posting racist messages without Vincente “knowing” about it. Sure, I’m sure the racist far left fascists believe that bs. But Vicente González hired him so he has to take responsibility for the racist messages of his hireling.
Oops, sorry. Didn’t mean to make you laugh putting the words democrat and responsibility in the same sentence. We all know that goes together as well as oil and water.

Everyone to the radical left’s right is considered far right and dangerous and a menace to democracy.

The true menace to democracy is the Marxists and Socialists. They believe that Executive Orders can replace the legislative process. Democrats keep trying to work around the Constitution.

Democrats being racist is nothing new. Democrats gave us the Civil War, and instead of trying bipartisanship, they foment political instability and division based on race.

They are a danger to democracy.

Can people stop using tweeter? I am blocked on a comment that I think is free speech. I will not delete it out of principle. Use another platform or make a copy.

Love Mexican food, cotton fabric and folks who earn their living. The Doosh who produced that blog story needs to have his face slapped, hard, from both sides..