“Besides being Trump supporters, what Flores, De La Cruz and Garcia have in common is extreme views.” 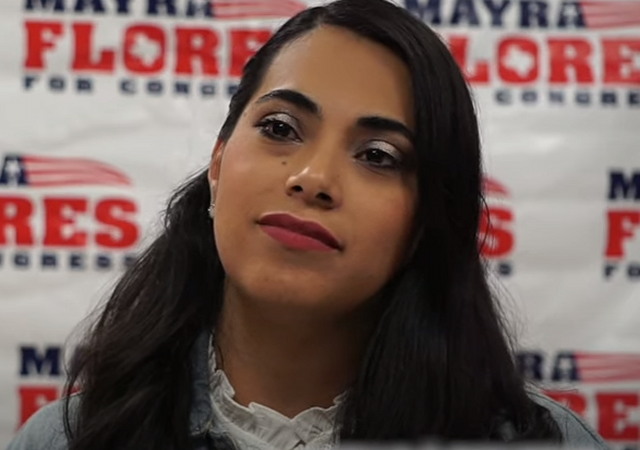 CNN columnist Paul A. Reyes has written a new piece that’s critical of the new crop of Latina Republican candidates like Mayra Flores and others.

He comes right out and claims that they’re not genuine. Why? Because they’re not liberals.

This is no different than when Joe Biden told a black man “you ain’t black” for the crime of not being committed to voting for him.

This is what the left does to virtually anyone with minority status who they think needs to be told to get back in line.

Opinion: These GOP Latina candidates are not the ‘real deal’

Conservatives are heralding them as “real deal” Republican candidates. They are seen as proof that the GOP can win over Latino voters. They are three Latinas from South Texas: Mayra Flores, who won a special election to represent part of the Gulf Coast, and Monica De La Cruz and Cassy Garcia, who are in congressional races in districts along the Mexican border.

Flores made history as the first Mexican-born woman to be elected to Congress. These women have drawn national attention for seeming to shatter the myth that Latinos generally vote Democratic. As Garcia recently told The New York Times, “The red wave is here.”

But the rise of Flores, De La Cruz and Garcia deserves to be seen in context. While these Latinas may be having a moment in the spotlight, they hold views outside the Latino mainstream. Their current prominence is more of a publicity coup for the GOP than an authentic reflection of Latino voters.

Reyes goes out of his way to otherize these women as extreme:

Besides being Trump supporters, what Flores, De La Cruz and Garcia have in common is extreme views. On social media, Flores promoted January 6 conspiracy theories as well as the QAnon hashtag in now-deleted tweets.

This is a sickening display that has become all too common. You may recall the left’s effort to paint Larry Elder, a conservative black man, as a white supremacist.

Columnist Raul Reyes, who regularly writes for the outlet, criticized Flores and other Republican Latinas from South Texas, Monica De La Cruz and Cassy Garcia, in a piece headlined, “These GOP Latina candidates are not the ‘real deal.’”…

Flores took noticed and criticized the piece on Twitter.

Flores was referencing a recent gaffe by the First Lady, who apologized after being widely criticized for comments made during a speech at the 2022 UnidosUS Annual Conference while talking about UnidosUS President Raul Yzaguirre’s work in the organization.

As per CNN: I'm not the real deal

Maybe I'm not the right type of taco 😅 pic.twitter.com/ORfN9BKtrb

What the Biden Family thinks about minorities:

2022: latinos are as unique as breakfast tacos

The political landscape of the country is changing.

Nothing new or unexpected.

These are Alinsky tactics, too — in which the vile Dumb-o-crats are well-steeped.

“”Pick the target, freeze it, personalize it, and polarize it.”

Wrong think will not be tolerated.

The left really do believe themselves Talosians.

Who elected the Clinton News Net as the arbitrators of truth? They have had to back of tale every year because it turned out to be a lie.

I heard from Jill that more and more breakfast tacos are leaning Republican.

What about Toyota Tacos? Do these medium size trucks lean GOP?

I checked with Toyota. They said they could bring us all together in one Accord.

She looks pretty real to my 75 year old eyes. Even has a sense of humor too.

“This is what the left does to virtually anyone with minority status who they think needs to be told to get back in line.”

“Being uppity” is the quaint expression.

Reyes is just a Democratic operative with a by-line. But you already knew that.

“Maybe I’m not the right type of taco.”

BwHAHAHAHAHAHAHAHA! I nearly spit my coffee on that response. I love this woman.

“While these Latinas may be having a moment in the spotlight, they hold views outside the Latino mainstream.”

Like most marxists, Reyes will say anything to support his fellow travelers, and is impervious as to how out of touch and dishonest it makes him look.

“Not the real thing”

Yet, a prime example of fake news, Commie News Network has the balls to say this?!?

What is a parallel metaphor for “keep them on the plantation “?

Not needed. Think fruit, not cotton.

The First Lady just compared them to tacos.
How is that any different than comparing Black people to watermelons? It’s just a way of saying we own you.

Can’t help but point out, again, how much better looking our women are than theirs. Leftist theology can’t help but show through on their miserable exteriors.

Even I appreciate the beauty on our side. And, well, the handsomeness of our side.

Fixed that headline for you.

To Leftists, your race determines your politics. But, only for minorities.
They can’t imagine that anyone who is not white is capable of thinking for themselves. They understand that white people can think for themselves, and can be Conservative, Liberal, or anything else. But, if you are a minority, you are not (to them) really a person of your actual race if you don’t think how they believe you must.

There’s nothing more racist than this.

Reyes is a graduate of Harvard University and Columbia Law School.

And still she has shown insight and good sense. Who’d a thunk it?

Reyes is not just a king, but a plural king. When you are endowed, like Reyes, with the divine right of kings (plural), How can you be wrong?

To make matters even worse, I will bet that the ladies in question can speak Spanish as well as English. If they are really counterfeits, how can they possibly explain away having any fluency in Spanish?

In other words, according to the racist fake doctor in the White House and her pedophile husband, “She’s not a real taco.”