ShutDownDC group: “We hear Kavanaugh snuck out the back with his security detail. @mortons should be ashamed for welcoming a man who so clearly hates women.”

For some reason that I really can’t fathom, the progressive left is escalating its hounding of conservative Supreme Court Justices. If they’re trying to turn off normal Americans, they’re doing a great job. If they’re trying to intimidate or coerce SCOTUS, they are failing miserably. But radicals gotta radical.

Justice Brett Kavanaugh already was the target of an attempted assassination. But the hounding and targeting of him continue.

Politico reports that Justice Kavanaugh was escorted by his security team out the back door of a DC restaurant because leftists were “protesting” outside.

On Wednesday night, D.C. protesters targeting the conservative Supreme Court justices who signed onto the Dobbs decision overturning the constitutional right to abortion got a tip that Justice BRETT KAVANAUGH was dining at Morton’s downtown D.C. location. Protesters soon showed up out front, called the manager to tell him to kick Kavanaugh out and later tweeted that the justice was forced to exit through the rear of the restaurant.

We hear Kavanaugh snuck out the back with his security detail. @mortons should be ashamed for welcoming a man who so clearly hates women. 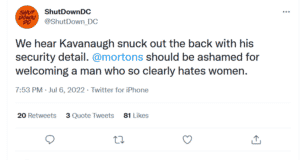 While the court had no official comment on Kavanaugh’s behalf and a person familiar with the situation said he did not hear or see the protesters and ate a full meal but left before dessert, Morton’s was outraged about the incident. A rep for the chain steakhouse sent Lippman this statement:

“Honorable Supreme Court Justice Kavanaugh and all of our other patrons at the restaurant were unduly harassed by unruly protestors while eating dinner at our Morton’s restaurant. Politics, regardless of your side or views, should not trample the freedom at play of the right to congregate and eat dinner. There is a time and place for everything. Disturbing the dinner of all of our customers was an act of selfishness and void of decency.”

The regressive left who seem to believe that they can crybully their pet causes and anti-American agenda into manifesting are eager to share their ‘thoughts.’

Let the states decide whether Kavanaugh gets to dine out in restaurants. That’s the fair and neutral position. https://t.co/FfGxulJsn9

Brett Kavanaugh, one of the most powerful people in the country, had his din-din interrupted by protesters.

The restaurant wails to Politico that politics “should not trample the freedom at play of the right to congregate and eat dinner.” pic.twitter.com/rLarR70d2c

Here I am fighting for the right to bodily autonomy and to stay married to my wife, but sure–let's codify the right to eat out at expensive restaurants on the public dime. Who paid Brett Kavanaugh's bills again? https://t.co/wuCk2YhzCq

Kavanaugh made his bed and now he has to lie in it. He plunged millions of American women into a hellworld where even their freedom of movement between states is supposedly a crime now so he can experience a taste of this in his own life https://t.co/AH6kmnPikm

And more unhinged vitriol from the #ShutDownDC group: 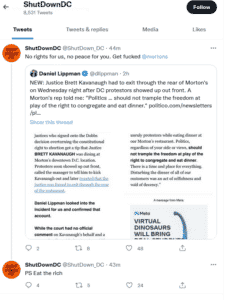 “PS Eat the rich.”  Surreal.  The radical left just cannot be a constructive part of civil society, and they demonstrate this daily. They cannot accept when they lose without erupting into violence and/or conducting ominous stalking “protests” of politicians and now of Supreme Court Justices.

They are the only ones who thrill at their crazy, and they make up a tiny fraction of the population (about 6%). The rest of America is thoroughly fed up with the woke crybully regressive left.

Wait until the stand-up law dogs at the FBI find out about this. They’ll have to tell their brownshirts to back off a bit. Maybe only harass Kavanaugh at home.

Question: what would happen if a Mob crashed Kavanaugh’s house and used a gun to defend his family?

I hope he is a very good shot. Even better, everyone in the home is firearms trained.

The FBI thugs would probably don their battle gear and arrest Kavanaugh. Oh, and probably call CNN or MSNBC beforehand.

May as well go down fighting. Take a few Fibbies down before they take you. Throat shots.

“Question: what would happen”

For starters, the Court would be granting cert to all sorts of 2A cases the cumulative effect of which would be to develop an unassailable body of case law.

If bakers must bake for gay causes then Restaurants must serve Conservatives. If you insist on the former but object to the latter, then you are a fascist.

Call them anything you want. They don’t care.

It’s time to stop thinking we can stoop to the left level.

A society functions and endures when it’s Citizens and the leaders they select remain committed to maintaining a commitment to formal and informal modes of behavior. The current leftist coalition seems unwilling to support and maintain either.

Their willingness to overlook or in some cases encourage violations of civic and societal norms of behavior, conduct and interaction is inconsistent with a functioning society. Coupled with their implementation of decriminalization for traditional acts and their willingness to impose selective punishment for ideological reasons upon their opponents and we are entering a dangerous phase.

The pendulum always swings. When it does and the relative positions are reversed perhaps it would be wise to apply similar actions to the d/prog for the same reasons we set backfires to limit a forest fire. Not because we like arson but to eliminate the tinder and stop the spread long-term.

Sorry for the VP Harris like use of repetition. My English Mastif decided that she wanted daddy time and distracted me 😋

One does wonder, if TurningPoint USA organized a protest outside of Justice Sotomayor’s home, how long it would take the Dept. of Justice to have the protesters arrested and tossed into the gulag that is housing the J6 folks.

There is no need to wonder.

Home? That seems overly restrictive, go to restaurants, parks, shopping malls, grocery stores…all the normal everyday places people frequent when not at work. As Rep Waters stated you must ‘get in their face and tell them they aren’t welcome’.

Either these tactics are simply a part of ‘democracy’ as Biden’s Press Sec stated and therefore totes ok or they are not. Despite repeated questioning the WH and leading d/prog have chosen to endorse these tactics. It’s a dangerous precedent that can go sideways fast but our concerns were roundly ignored.

If you think Eat The Rich is a joke, look at the videos coming out of Sri Lanka overnight. Mobs are hunting anyone dressing in expensive clothes.

Ironic coming from these deadbeats, though. Which rich people fund their activities?

The “protesters” were tipped off by a court insider, probably the same person who leaked the draft decision. Shouldn’t this protestor behavior be considered stalking? Imagine if “right wing extremists” did this to KBJ.

Where the d/prog and their ideological fellow travelers continue to endorse this decline in civility by their silence or in some cases encouragement they are normalizing this behavior. They are in fact undermining the norm.

Once the standards of our informal expectations of behavior in day to day life are altered then that alteration isn’t selective. A new lessor standard has been created and that new norm is equally applicable to everyone.

Who paid Brett Kavanaugh’s bills again?
Ummm, HE did. I’m guessing that wasn’t an expensed dinner nor was it during the time he is expected to be working. So you can’t claim the taxpayer paid for it.

Trust me when I say that you really don’t want to then argue the next step – that we, the taxpayer, pay his salary, and therefore his entire life belongs to ‘us’ – because you will not like where that goes. (On top of it being a violation of the 13th Amendment.)

We pay the dinner bills for Congresscritters, so I imagine we also pay for the judges.

What is wrong with these flamers? Both the yahoos who demonstrated outside the restaurant and the ignoranuses who commented on the internet approving all this?

Not enough time getting punched in the face.

These people are disgusting

I fear that these “protesters” are pushing us closer and closer to the edge where some members of “our side” will respond with deadly force. And even more of us will then cheer the results.

I always carry a weapon, but I know that I am increasing the percentage of time that I carry one of my .45 1911s instead of my more concealable and much more comfortable .380. Because I am feeling less secure and more threatened.

We are going to hell in a handbasket.

“And even more of us will then cheer the results.”

Damn right we will. Death is deserved by a great many. We could just call it post birth abortion.

I notice the tweet from one named “Victoria Brownsworth” saying she has a wife. Why would a lesbian require abortion services, except in the most narrow of circumstances? The left has completely abandoned this universe and is now in another dimension way beyond the Twilight Zone.

Hmm, I guess if a man can get pregnant then a lesbian relationship can also produce pregnancy.

“Bad news, darling… our sperm counts are too low.”

Not unless one of the lesbian ‘spouses’ is unfaithful.

Morton’s seems to have a poor understanding of the etiquette of the host/guest relationship. My understanding of a host’s responsibility is more like what is recounted in Genesis 19:1-7. (I draw the line at the first half of 8.)

Instead of whining “they oughta do sumthin about this,” they need to realize that THEY were the ones in the position of being honor-bound to do something, and they should have done it. Whether it was call the police or repel the boarders themselves, it was their duty as hosts.