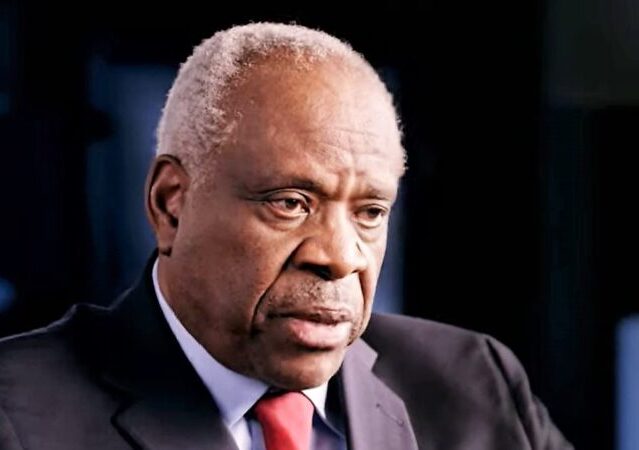 A month ago, following the Supreme Court decsion to overturn Roe vs. Wade, students at George Washington University petitioned to have Justice Clarence Thomas removed as a lecturer, a move the school rejected.

Now Thomas is not going to teach this fall, but the petition controversy is not being reported as connected to this new development.

From the GW Hatchet:

Supreme Court Justice Clarence Thomas will not teach a Constitutional Law Seminar this fall, according to an email addressed to students in the seminar that was obtained by The Hatchet.

Gregory Maggs, who has co-taught the course with Thomas since 2011, stated in an email addressed to the class that Thomas is “unavailable” to co-teach the course in the fall, and Thomas is no longer listed as a lecturer on GW Law’s course list. Thomas’ withdrawal from the course comes a month after more than 11,000 community members signed a petition demanding his removal from GW, but officials declined to remove him from his role after he voted to overturn Roe v. Wade.

“Unfortunately, I am writing with some sad news: Justice Thomas has informed me that he is unavailable to co-teach the seminar this fall,” Maggs said in an email obtained by The Hatchet. “I know that this is disappointing. I am very sorry.”

Thomas did not immediately return a request for comment. Maggs deferred multiple requests for comment to GW’s communications office.

“The seminar has not been canceled but I will now be the sole instructor,” Maggs said in the email. “For those of you still interested in taking the course, I assure you that we will make the best of the new situation.”

FOX News has more on this:

Thomas has not spoken publicly on the matter, and there has been no explanation provided for his sudden withdrawal from the class.

Students started a petition to have him removed following the Supreme Court’s abortion ruling last month, but the university released a subsequent statement pushing back against that petition.

It read, “Because we steadfastly support the robust exchange of ideas and deliberation, and because debate is an essential part of our university’s academic and educational mission to train future leaders who are prepared to address the world’s most urgent problems, the university will neither terminate Justice Thomas’ employment nor cancel his class in response to his legal opinions.”

Thomas has been a liberal target since the Supreme Court overturned Roe v. Wade in a landmark decision earlier this year.

Even if this is not connected to the petition from last month, the students who pushed it will likely see this as a win.

You need to read the fine print in the CRT teaching materials.

I’d like to live in an America where Clarence Thomas is celebrated and Barack Obama is taking orders at a Taco Bell.

Or, taking orders from the overseer of a prison road gang.

Thomas has been a liberal target since the Supreme Court overturned Roe v. Wade in a landmark decision earlier this year.

Codswallop. He’s been a target since he was nominated to the Supreme Court.

I’d place odds on Justice Thomas knowing that the pro-abortion fanatics would infiltrate the class and make teaching a general hell, screaming and throwing fits inside and making horrid noises outside, including pulling the fire alarms every time class was about to start.

I would love to watch his seminars from previous years, even though I’m not a legal beagle. As a writer, I enjoy watching the Brandon Sanderson writing series on YouTube even though I’m positive I’ll never get even close to that level of expertise.

If that tactic didn’t work, they wouldn’t engage in it.

I hope he isn’t ill.

Probably not ill, but, he and I are the same age, near as darn it. One learns when to press on and when not to.

Thomas could give lectures advocating 9-month abortions, affirmative action, and reparations, but, he’d still be shouted down and harassed without mercy.

Because Clarence Thomas is that boy who doesn’t know is place, that’s why.

Madame Lazonga predicts that within three weeks, we will learn that Justice Thomas was unavailable to teach the sniveling little ingrates at GW Law, because he’s accepting a position at the new University of Austin instead.

Austin. Isn’t that place flush with liberal douc bags too?

I don’t understand the boycott/protest. If the goal was to show disapproval of Justice Thomas, would not it also extend to his former law clerk? Greg Maggs was an early clerk for Justice Thomas and represents the same ideas about Constitutional Law. If the protest was that Justice Thomas’ ideas about the Constitution are wrong, aren’t they equally wrong when the same ideas are taught by his protégé? Or do the same ideas suddenly become acceptable when they are taught by a white man alone instead of a white man teaming up with a black man? Or was the protest not directed to Thomas’ ideas but rather a tactic to pressure him between the time the daft opinon was leaked and the issuance of the real opinion?

This is all short sighted. The students taking his class probably have better access to influence Justice Thomas’ thinking than is now the case where he will stay at home and not interact with law students.

A judge in our Bible Study clerked with Justice Thomas when he was newly out of law school. Our friend’s comment: ‘He searched for the Truth wherever that led.’ He said it was life-changing for him.. This man was appointed by President Trump to the Ninth Circuit and I wish him well.

This shows the the so called diverse liberal l communist democrats are NOT diverse unless you agree with them.

Justice Thomas has made it clear that Roe and Casey weren’t the only cases which had stretched the 14th Amendment beyond recognition; that others regarding an assumed federal interest in gay marriage, and the mental contrivances used for upholding affirmative action were similarly incorrect.

Perhaps he is researching those and casting his eye out for cases which could be brought in challenge to those previously and wrongly decided? That’s a lot of work, ever for an intellect such as his.

Too bad these law school administrators will not engage in the inclusiveness and equity demanded by the left. If conservative justices cannot teach at law schools then liberal justices should enjoy the same discrimination

I love Justice Thomas and his judicial philosophy. However, if I didn’t, if I disagreed with his ideas, I would want to take this course, taught by him. How can you (reasonably) address an opponents arguments if you don’t know or understand them. I guess the key word is “reasonably”; they just want to shut down views they don’t like.

So GWU does not believe victims?

Very likely upon advice of his security people. The left would turn any assassin into a bigger hero than druggie convicted felon George Floyd.

The left needs another live hero to blather about, and an assassin would be ideal. Their cop-killer hero, Wesley Cook, aka “Mumia Jamal”, is in poor health.

I hope these children are happy now. They need him a lot more than he needs them. We’re living in the post America suicide spiral.