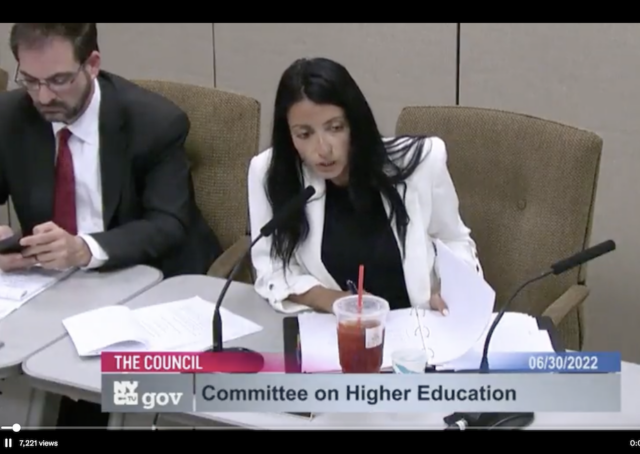 On June 27, 2022, a group calling itself Students and Faculty for Equality at the City University of New York (SAFE CUNY) filed a discrimination claim with the American Bar Association (ABA) against CUNY School of Law. The complaint letter charges that CUNY Law discriminates against Jewish and Israeli students and faculty members.

While the woke ABA may have been tempted to laugh off the complaint – since “diversity” administrators often not only refuse to confront anti-Semitism, but actually foment it – CUNY did not have that luxury. On June 30, its chancellor was scheduled to appear before the New York City Council Committee on Higher Education for a hearing about anti-Semitism on campus.

The complaint letter charges that CUNY’s law school discriminates against students, faculty, other employees, and prospective students, faculty, and employees on the basis of ethnicity, religion, and nationality. It also charged CUNY with violating academic freedom. In particular, the complaint charged that the law school faculty’s recently-adopted BDS policy puts the school out of compliance with ABA requirements.

The scope of that [faculty BDS] commitment is only revealed by a link in a footnote, which leads to an extensive BDS website. A few clicks will then take readers to the “Guidelines for the International Academic Boycott of Israel,” which include “the cancellation or annulment of events, activities, agreements, or projects involving Israeli academic institutions or that otherwise promote the normalization of Israel in the global academy [including] conferences, symposia, workshops, book and museum exhibits.”

If honored by any law school, these limitations would constitute a blatant violation of academic freedom for future teachers, scholars or students interested in understanding Israel – beyond its purported crimes – in their research or education. At a public law school, such sweeping viewpoint restrictions on conferences, symposia and book exhibits – prohibiting anything that “normalizes” Israel – also violate the First Amendment.

The ABA’s law school standards prohibit discrimination on the basis of religion and nationality, currently require law schools to have a “commitment to diversity and inclusion,” and require them to have an academic freedom policy. The letter asks the ABA to

review these unprecedented and deeply discriminatory policy adoptions and take all appropriate measures… including withdrawal of accreditation, sanctions, and/or remedial action until such time as CUNY Law rejects its discriminatory policies and returns to compliance with the ABA Standards.

The law school faculty’s BDS resolution is only the latest in CUNY’s recent history of rabid anti-Zionism/anti-Semitism. A few months before the faculty resolution, students had adopted a pro-BDS resolution. In June 2021, the CUNY faculty union adopted a resolution claiming Israel “massacred innocent Palestinians during the spring conflict in Gaza. The measure did not mention, much less condemn, any actions by Hamas.” A number of faculty members subsequently resigned from the union. By June 30, 2022, that number had reportedly reached 300.

The atmosphere on campus has been increasingly hostile to Jews. CUNY’s law school chose as its 2022 commencement speaker an anti-Israel activist who has called for the murder of Israelis/Israel supporters. Jews have been assaulted or threatened with assault for showing support of Israel, to the point that students are afraid to show public signs that they are Jewish, such as a kippah or Star of David.

[According to Ilya Bratman, executive director of Hillel at Baruch College,] “A Jewish student is walking through the hallways wearing their kippah,” Bratman said. “People say to him, ‘You are an oppressor.’ No one asked him his opinion on Israel. It’s complete and overt antisemitism.” …

Bratman said that the CUNY law school’s student government representatives have stated “openly and loudly that Jewish students shouldn’t come to college,” and that the tenor or the organization is “extraordinarily anti-Zionist.”

Unsurprisingly in light of the recent complaint letter, CUNY Chancellor Félix Matos Rodríguez bailed on the June 30 hearing he was supposed to attend. It had been rescheduled from an earlier date to accommodate his schedule, due to his express request to attend in person. On the evening of June 29, he notified the Council that he would not be present. Instead, he sent three underlings to appear virtually at the session, which included both in-person and virtual testimony.

His failure to show didn’t go over well with the Committee. (Video of the meeting may be found here.) Brooklyn Councilwoman Inna Vernikov, the ranking Republican on the Council’s Education Committee, fumed: “Last night, in a very cowardly fashion, the chancellor said he won’t appear. Instead he sent a lawyer to represent him. What a sham, what an insult to the Jewish community of New York… When it comes to Jews, do Jewish lives matter?!”

Q: “Do you have a history of antisemitic incidents logged?”@CUNY: “Unfortunately, we do not.”

This was the answer given. Does CUNY not take this matter seriously?

Matos Rodríguez sent CUNY Vice-Chancellor Glenda Grace, Graduate Center President Robin Garrell, and Vice-Chancellor Denise Maybank to represent the university system. They attended the hearing via Zoom. They largely defended anti-Israel activity on campus as free speech and described problematic incidents as isolated events. They refused to discuss specific numbers of anti-Semitic incidents, CUNY’s disciplinary responses to them, or specific plans for addressing anti-Semitism. (CUNY has had no problem condemning racism and “inhumane and shameful acts” in the context of claims of anti-black racism.) They said they were “having conversations” about the issue and “reaching out” to students who were affected. Council members exhorted CUNY to adopt the International Holocaust Remembrance Alliance’s working definition of anti-Semitism. Among other things, IHRA’s working definition includes denial of Israel’s right to exist, claims that Israel is a racist endeavor, and holding Jews collectively responsible for Israel’s actions.

Tense exchange between Councilmember @InnaVernikov and a CUNY official over whether or not the campus will denounce BDS. pic.twitter.com/04WaxqOnVR

CUNY faculty union head James Davis also testified. He at first refused to say whether he had publicly expressed support for BDS, then said he had not. A statement he gave on Twitter appeared to contradict his Council testimony. Davis also claimed he reached out to faculty members who resigned – a statement flatly denied by a testifying faculty member.

Quite a video from today's NYC Council hearing: @InnaVernikov pressing @PSC_CUNY president James Davis, who voted in favor of BDS in 2013.
Davis claims that he was unaware of ever having publicly supported BDS. (He did so in a video session this spring.)https://t.co/bFmi6LACf0

Besides the CUNY representatives, speakers included students, faculty, and Jewish rights advocates including Alyza Lewin of the Louis D. Brandeis Center for Human Rights Under Law, Susan Tuchman of the Zionist Organization of America, Tammi Rossman-Benjamin of AMCHA Initiative, Amanda Berman of Zioness, and Gerard Filitti of the Lawfare Project. The witnesses described a culture of harassment and intimidation from both CUNY faculty and students, particularly against Jewish students who were supportive of Israel. One student described how she found CUNY law school’s atmosphere so hostile that she transferred to Yeshiva University. Jewish faculty described being targeted, by the school and by the faculty union. The committee was encouraged to speak the only language CUNY understands, by cutting its budget until it addresses the problem.

In any battle of smart people versus dumb people, the left sides with the dumb people. Antisemitism in a nutshell.

Wonderful opportunity for Yeshiva University to expand faculty and student base.

Netanyahu’s greatest achievement was he made Israel the only remaining thing ordinary left and right wing people agree on.

Which category do you think the people handling this appeal are on?

Democrat elites in charge of institutions are at war right now, there is no such thing as an enemy of my enemy they don’t like and that will include anti-semites.

CUNY since the advent of open admissions has had many professors who have engaged in anti Semitic comments in their classes and lectures-all of which are subsidized by taxpayers’ dollars.

Quit worrying! Dr Jill has it covered. As soon as she finishes speaking to Latinx voters in Texas she will come to NY and tell Jewish voters they are unique as matzah bread.

For a group that so loudly proclaims “attacks on our democracy (even though it is a constitutional republic), they sure abandon the only democracy in the ME pretty quickly.

Antisemites have to antisemite, racists gotta racist, and they all seem to have to be Democrats, despite projection claims to the contrary.

The antisemites are all around you. If you have kids, get out now. Use history as your guide. Has anything changed?

Not much. Changed the name from Stuytown to New York a few years back, but other than that……

I call the other Party the “Dhimmi-crat Party” for a factual and apt reason. The vile Dhimmi-crats’ unabashed Jew-hate and their despicable embrace of Muslim supremacists’/terrorists’ contrived and fallacious victimhood mythologies and slanderous vilification of Israel represent the largest manifestation of contemporary Jew-hate outside of the Islamic world.