After enduing an advertisement from California Gov. Gavin Newsom, Florida now has to deal with another pest. 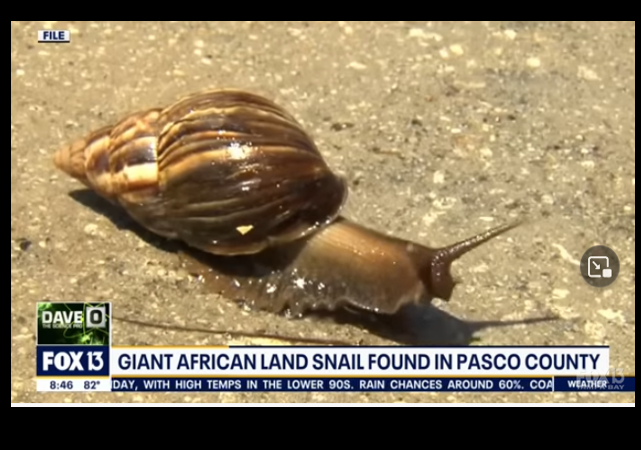 After enduing an advertisement from California Gov. Gavin Newsom, Florida now has to deal with another pest.

Hundreds of giant African land snails have turned up on the state’s Gulf Coast and threaten to destroy a vast array of plantlife.

The snails pose a threat Florida’s environment, so officials mapped out a quarantine zone in New Port Richey to try to get rid of the pests.

“We are so lucky to have an experienced team ready to prevent, detect, and treat invasive threats,” said Florida Agriculture Commissioner Nikki Fried. “Let me assure you, we will eradicate these snails. We have done it twice before, and we will do it again – it is not a question of if, but when.”

The Division of Plant Industry said it’s team of 30 people collected 1,016 snails from 29 properties. The largest one was 4.5 inches, but they can grow up to 8 inches big. The snails have a light colored cream body with a dark brown shell..

Part of the reason for the concern about the African Giant Snail is that it carries parasites that can cause serious disease in humans, pets, and livestock.

The snail, native to East Africa, is one of the most damaging in the world, eating at least 500 different types of plants, tree bark, and even paint and stucco on houses, the U.S. Department of Agriculture’s website said.

The gastropod, whose shell can grow to the size of a human fist, often carries a parasite known as rat lungworm that can transmit a type of meningitis whose symptoms include muscle aches, headache, stiff neck, fever and vomiting.

…Officials stressed the importance of not touching nor ingesting the snail to prevent infections.

Florida has dealt with African Giant Snail invasions twise before. The most recent was a ten-year effort in Miami-Dade County that cost $23 million and ended in 2021 after collection of around 170,000 snails. It is thought that the snails have returned again as a result of the illegal international exotic pet trade or arriving hidden in cargo from overseas.

Greg Hodges, assistant director of the state Division of Plant Industry, said it is illegal to import or possess giant African land snails in Florida without a permit.

It is also illegal to move them from a quarantined area, such as the one in Pasco County, or to take away other material in the area such as soil, yard waste or building materials without state approval.

Around 1,000 snails have already been collected in the quarantine area, Mr Hodges said.

The homes involved will be treated with a molluscicide bait and snails are being collected by state workers aided by dogs trained to sniff them out.

Killer hornets left five people dead in France and has been spotted to be heading towards the mainland of Southeast UK, based on reports on Tuesday, June 14.

…The fatalities in France were caused by anaphylactic shock caused by the lethal stings of Asian giant hornets.

Due to reported breeding grounds in the Channel Islands, beekeepers warned of a possible hornet invasion across the UK in an unspecified timeline.

Washington State is now making plans to track down these insects using drones.

Well ya…
I think the snails are attracted to red ball caps.

The inevitable and predictable Pravda Times/WaPo headline will read thusly:

More correctly Izvestia on the Hudson and Pravda on the Potomac.

No, they decimate crops.

Put a bounty on them.
I don’t knw, 25 cents, 10 cents, a dollar…
Some people would go snail hunting.

My old Uncle would take his boys out collecting cans in Washington State for the 5 cents a can recovery and turn them in at just about any food store.
They also picked pine cones needed by the lumber companies for seed…
I went with them in that and found myself 80′ up fir trees…
It was fun.

Takes it to the next level.
That is a great strategy.
But, do you really think even with that that Government Employees would cost less?
I seriously doubt it.

I didn’t have giant parasite toting snails on my 2022 mini apocalypse bingo card.

Send them to The French Laundry so Newsom can dine big on snails.

According to the video, each snail has both male and female parts.

Not surprisingly, their preferred pronoun is “they.”

We have had them here for years. The rat/lung disease is serious but uncommon. They do have enemies that will arise. The snails make good escargot.

“officials mapped out a quarantine zone in New Port Richey to try to get rid of the pests.”

Oh, kill me now. One more nightmare horror to terrorize my 104-yo mother.

Lawsuit by a Federal agency to protect the snails as an endangered species in 3, 2, 1, …

I can imagine the Biden administration being this spiteful, anything to hurt Florida and/or DeSantis.

Or as Milhouse notes above, “undocumented gastropods.”

Visions of giant snails appearing over the horizon at daybreak casting long ominous shadows over New Port Richey as they move in to wreak their devastation. Am I close?

Giant Filthy Poisonous Snails are a symtom of the times. The White House has been infiltrated with them and they are taking over the government. We need “Trump the Exterminator.”

Well, no. NPR is on the Gulf coast, so their ominous shadows wouldn’t appear until sunset.

My parents retired to NPR so I knew that and began with giant snails appearing over the mountains. I’m sticking to what I wrote anyway.

Let me assure you, we will eradicate these snails. We have done it twice before, and we will do it again
So, maybe there’s a lack of understanding of the word ‘eradicate’?

I long for the good ol’ days of ‘murder hornets.’