“Dutch farmers turned out in their thousands to speak out against the World Economic Forum (WEF) climate change policies of their government.” 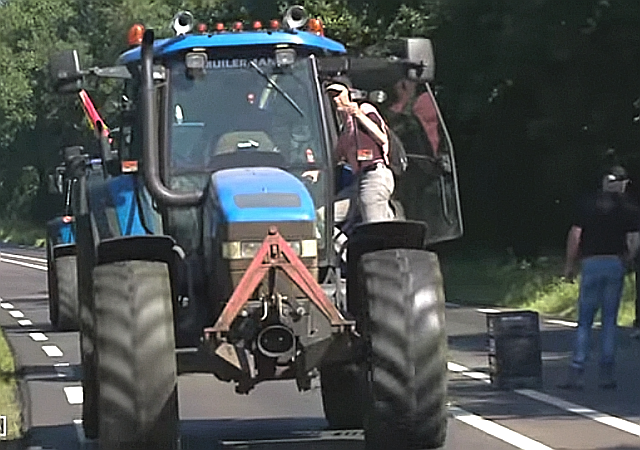 The Netherlands has been hit by massive protests as thousands of Dutch farmers demonstrate against government’s globalist climate change policies that threaten to stifle country’s agriculture sector.

The farmers’ protests are in response to parliament’s decision, taken on June 28, to drastically reduce emissions, particularly those in the agriculture and livestock sectors. They are “protesting against a proposal, approved by lawmakers Tuesday, to reduce emissions of pollutants like nitrogen oxide and ammonia by 50% by 2030,” the Associated Press reported this week.

Protestors demonstrated in front of several public buildings with manure and slurry after politicians voted on proposals to slash emissions of damaging pollutants, a plan which could force farmers to cut their livestock herds or stop working altogether.

Prime Minister Mark Rutte’s Government says the emissions of nitrogen oxide and ammonia, which livestock produce, must be drastically cut back close to nature areas, which are part of a network of protected habitats for endangered plants and wildlife stretching across the EU.

Dutch farmers turned out in their thousands to speak out against the World Economic Forum (WEF) climate change policies of their government.

If farmers fail to comply with the new emission regulations, the government apparently plans to put them out of business. Dutch ministers “warn that farmers will have to adapt or face the prospect of shuttering their businesses,” the newspaper Irish Independent reported last week.

Farming is big part of Dutch economic and social life. The tiny European country, smaller than West Virginia, is the world’s second largest agricultural exporter, after the United States.

The farming regulations in the Netherlands are part of a bigger European Union agenda, as Brussels enforces one of its toughest ‘climate’ measures despite rising inflation and fuel prices across Europe.

“EU countries have struck a deal to pursue tougher climate policies despite fears among some member states that a rush to shore up energy supplies after Russia’s invasion of Ukraine would weaken Europe’s environmental ambitions,” the British Financial Times reported Wednesday.

It’s looking more and more like the Marxists are going to create another mass starvation event. But this time from inside the institutions of the west.

Every time you read about Biden blocking oil drilling think.. another Million poor children are going to starve somewhere.

Gotta love the globalist bureaucracy of the EU who’s members are not directly elected by nor accountable to the people.

It isn’t hyperbole to state that EU bureaucrats want the people of Europe to be cold and hungry or that they are seeking to undo the industrial revolution. That will be the result of these policy choices.

Power without accountability is a recipe for disaster every time. Whoever survives the EU over there, I hope they learn that well as they rebuild their collapsed countries once the EU fails.

Also more fundamentally this is the Dutch governments initiative in order to meet pre agreed emissions targets. Targets that its signed up to. The implementation has nothing to do with EU bureaucracy.

The facts are:
1. The EU set targets composed by the bureaucracy or provided to them by the environmental lobby (the MPs didn’t do the heavy lifting of drafting reg and targets)
2. The Dutch govt selected these mandates as a way to achieve those targets.
3. The EU has a vast bureaucracy.
4. That bureaucracy is not elected.
5. The EU MPs are elected
6. The EU Council are heads of State
7. The EU commission is chosen by selections from Council and then approved by EU MPs
8. The bureaucracy of each member Nation is practically speaking unaccountable

If you believe the EU bureaucracy and the bureaucracy of its member Nations wouldn’t be happy to elevate their ideological environmental standards over the welfare of the agricultural sector as whole, individual farms or the ability to produce food then you are deluded.

See the actions of the Dutch govt here.

Spread the [Green] blight. Abort the greening effect. Sequester our [carbon] Posterity. Climate stasis. We can!

Farmers should put their plows on and go into those nature areas and get rid of those endangered plants by plowing them under. Once the reason for shutting them down is gone they can go back to farming.
And the liberal greenie weenie tears would irrigate the crops.

They want to kill off the livestock, and once that’s done where are the people to get protein from without meat, milk, and cheese? Bugs, of course.

Almost as if they want 8 billion people to stop breathing. We need to figure out how to make them go first

Or, not to put a fine point on it, from The Hague.

God bless ’em and protect ’em.
Long may the farmers and their families prosper.

Never chastise a farmer with your mouth full.