The task force talks about reproductive care so I cannot wait to hear how they will address the violence against pregnancy centers. 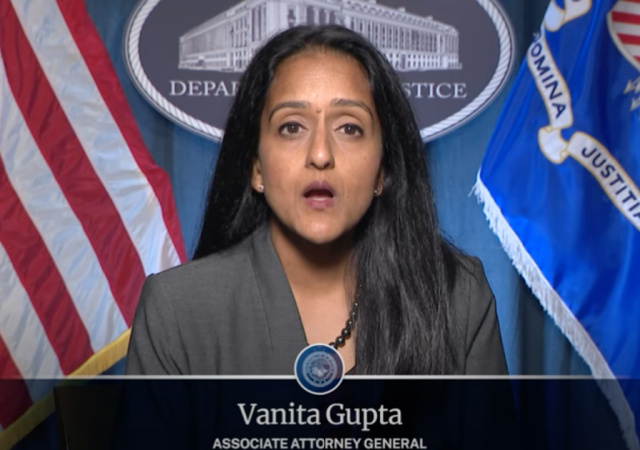 The DOJ formed groups several months ago when it seemed possible we would finally get rid of legalized abortion.

“As Attorney General Garland has said, the Supreme Court’s Dobbs decision is a devastating blow to reproductive freedom in the United States,” said Associate Attorney General Gupta. “The Court abandoned 50 years of precedent and took away the constitutional right to abortion, preventing women all over the country from being able to make critical decisions about our bodies, our health, and our futures. The Justice Department is committed to protecting access to reproductive services.”

I wonder if all this “reproductive care” includes everything or else it’s just about abortion. Because that means the protections would also apply to the pro-life pregnancy centers, right? Will the task force do anything about the attacks against those centers? They offer reproductive care like birth control and medical services for pregnant women:

The Task Force will monitor and evaluate all state and local legislation and enforcement actions that threaten to:

I cannot wait to see how the task force will address the attacks on pregnancy centers. One director told the Senate her center had to hire 24-hour security and install bullet-proof walls. A man with a machete confronted the clinic, too.

Prediction: if the GOP takes both houses of Congress, nothing will be done to shut this down.

If the GOP is back in the White House in 2024, nothing will be done to shut this down.

Amazing… It’s like you have a crystal ball or something. SMH.

We human grizzlies have amazing powers of deduction, analysis, and logic.

What is past is prologue.

Not entirely convinced of that at this point. (but admit that your position has great merit and probability)

I think its going to depend on the number of MAGA elections and the financial impact as to which way the RINO’s will lean.

I could be too “old school” on this but I view the left as evil and the RINO simply as “for sale” and they will move in the direction of greater individual benefit.

No matter what the affiliation, ALL OF THEM have their price.

I know quite a few people who have been fence sitters who are now rapidly becoming hard right pro-lifers.

Out here in conservative red America these abortion nuts are seen more and more as dangerous monsters and a credible threat that require active measures to defend against.

I like “abortion enthusiasts” or “abortion fanatics,” but abortion nuts works…

There are some tweets over on Libs of TikTok that will convince you to call many of them monsters. One shows a tattoo on a woman’s belly of a baby with a knife driven into its skull. The tattoo artist says it’s her best work. My God!

Went and had a look. Saw that tattoo, and other leftist content. I’m not easily shocked or offended, but I’m glad that I already had breakfast, because what I saw was beyond nauseating. Monsters indeed.

thanks for taking one for the team. 2 witnesses is enough for me to know to avoid.

We welcomed my first grandson into the world this past weekend. I am so proud of my daughter and son in law, and our entire extended family are just beaming with happiness. The little guy is happy and healthy, as is his mom.

It’s hard to comprehend that there are people out there who would destroy a beautiful innocent child. To destroy life and never experience such a joyous and miraculous event is just tragic.

I hope this doesn’t take resources away from their sacred duty of persecuting concerned parents at school committee meetings.

I don’t suppose there are any resourced devoted to fighting black on black crime, particularly in Chicago.

Good point. We the people over the years have been conditioned to believe that problems are still to be solved by a central-Federal-government. Today we are constantly trying to solve the problems caused by yesterdays solutions.

One would think that, but I can’t help noticing the FBI, ATF, and sometimes even DHS is present at an awful lot of what we think are local crime scenes.

If they weren’t, the crimes wouldn’t have occurred.

But it affects interstate commerce!

Yes, the Feds have to make sure those pesky state and local LEAs don’t interrupt the flow of Fentanyl from China via Mexico to points north of the Rio Grande. It’s part of Joe Biden’s border strategy, and Hunter will start Jonesing so badly he’ll smoke parmesan cheese that spilled on the carpet if he can’t get the real thing.

I recall that the Feds in Chicago have refused for decades to prosecute straw gun purchaser cases, which presumably would address the Dem’s excuse that criminals’ guns in Chicago come from more gun-friendly states.

“I’ve noticed that everyone who is for abortion has already been born.”

Interesting that this “reproductive rights” task force actually has nothing at all to do with reproduction.

Somehow I don’t think it’s what these ghouls consider “reproduction”.

Couldn’t call it “woman”,They don’t know what a woman is

This is not just a ‘culture war’ but is equally a war on culture.

What a waste of taxpayers dollars

And how is the topic even within the purview of the DOJ? How about a simple lawsuit under the umbrella of the recent EPA decision?

Meanwhile, Fauxcahauntus is stating that “we need to shut then down all across the country”… pro-life crisis pregnancy centers that is.

Will the task force do anything about the attacks against those centers? They offer reproductive care like birth control and medical services for pregnant women:

But yeah, let’s see how this task force handles that. Probably by handing out the molotov cocktails.

And rounding up the usual grammar school parents who raise their voices at a local school board meeting.

They admit the task force is already there. All they have to do is formalize it.

Their Ministry of Love will come by and explain your thoughtcrime with a truncheon.

Care with reproduction requires only soft lights and sweet music.

The DOJ?
Well, I guess they have their angle.
An excuse to meddle.

somebody needs to tell the woman in the header photo that she’s missing her pointed hat–for some reason, looking at her photo, feel an urge to pour a bucket of water on her

There is no mystery in sex and conception.

Enable rape…rape-rape and incest with little girls in darkness.

We had one baby who didn’t want to be born so we called the WOMB POLICE.

I asked them why the baby didn’t want to be born.

They said, “Because it was a Democrat and didn’t want to give up its free womb and board!”

You misspelled “religious indoctrination centers” //I cannot wait to see how the task force will address the attacks on pregnancy centers. //

“… Ban Mifepristone based on disagreement with the FDA’s expert judgment about its safety and efficacy; or …”
While Mifiprestone may be ‘safe and effective, ‘ doctors want supervision because there can be issues. More to the point, it doesn’t matter if the FDA has ruled it safe and effective, if it’s function is to circumvent State laws prohibiting abortion. It only aids in the commission of a crime. Guns are safe and effective but that does not excuse you for robbing a store.

It has legitimate uses. Ron Paul wrote an article about this that was published in Liberty back in the late ’80s, that convinced me it should not be banned. Doctors can prescribe it off-label for whatever they think it might be good for, and without probable cause to believe it’s being used for a crime there’s no foundation for a search warrant to find out what use it’s actually being put to.

The obvious implication of this is the nationwide setting up of abortion clinics staffed by Federal employees, and the addition of abortion services in VA and DoD hospitals, which do not currently do them.

That would violate the Hyde amendment.