We are at the tip of the spear in this inflection year for the nation and education. Join us. 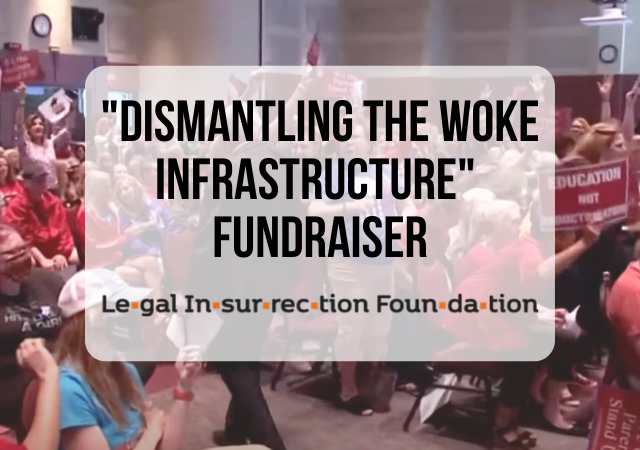 We are at an inflection point in a battle to save the nation. We need to begin dismantling the woke infrastructure, particularly in education. Join us in this fight. You can DONATE HERE.

I addressed the need to dismantle the woke educational infrastructure in my speech last week to over 100 state legislators from around the nation:

One year ago, I told you that the fight over education was a fight for the national survival…. And I said, then, and I say it now, if you wanted to rip this country apart, what would you do differently than to take the single most divisive issue in our national history and make it the exclusive focus of the educational experience? I urged you to take action, to treat this as a national emergency….

And I would ask you to use this coming year to work with groups, you’re welcome to reach out to us, to start to dismantle the infrastructure that has gotten us into this mess.

The problems go beyond education, but education was the key to the capture of so many institutions.

We are at the tip of the spear in seeking to reclaim education.

Our coverage of Critical Race and related ideologies through our CriticalRace and Legal Insurrection websites and our investigations of the education infrastructure supporting it has generated enourmous national media attention. I have frequent media appearances to talk about what we do. Since going live 18 months ago, our CriticalRace website alone has generated almost 6 million user engagements, including page views and clicks on our resource links, as well as over 100 media references, and even citation in proposed congressional legislation.

We also have come to the assistance of parents and teachers fighting these battles, successfully gaining national media attention for their struggles. All the while, we continue doing the work of investigation, research, and litigation, including cooperating with Judicial Watch in challenging a racially discriminatory scholarship program and filing our own amicus brief in the Supreme Court in support of Asian students in the Harvard case. Of course, our coverage of the Gibson’s Bakery case and other legal cases continues to generate acclaim.

What it is like to be at the tip of the spear? We are under attack constantly, in ways readers and supporters don’t fully understand. Our server is under automated attack around the clock and we have had to invest several thousand dollars a year just to keep the server running. Our newsletter subscription link is under bot attack and we had to disable it until we get better security. We got kicked off our email/donation/event platform SalsaLabs without explanation but ‘coincidentally’ shortly after it was purchased by a far left group, the transition ended up costing us almost $20k in consultant time and additional costs. A leftist educational group we have been intensively investigating unsuccessfully tried to interfere with our hosting company and domain registration.

If we weren’t effective and over the target, we wouldn’t be generating such flak. Staying in the fight absorbs enormous resources.

Our generous readers, like you, are the only reason why we are able to keep fighting. Together we are stronger.

For those who may be on the sidelines, join us in this fight. We can be your voice.

The greatest way to be part of this effort, and support our work, is making a tax-deductible donation to the Legal Insurrection Foundation, a tax-exempt 501(c)(3).

Also, as a reminder, if you are an Amazon shopper, you can automatically donate at no cost to yourself by naming LIF a charity of your choice.

I do that as well.

Thank you for the reminder. I just changed my selected organization to LIF.

It will not be just a fight, it will be an ideological war.

Yeah, and it’s an even more terrible thing to infect with a woke virus.

Professor Jacobson, I was reading an article this morning in which you were quoted. It’s so good to see and hear you more and more on TV, radio, and in print. You are poised to be a hero in defending the American experiment against its enemies.