Kemp is leading in polls even though Abrams has raised a lot more money than him.

Republican Georgia Gov. Brian Kemp is facing off against Stacey Abrams in November.

The Cook Political Report had the race as a toss-up. Abrams is all over the place. The MSM fawns over her, the left seems to thang onto every word she says. She’s pulling in money.

No one talks about Kemp. If they do, it’s to criticize him.

But with only three-and-a-half months left, the race now leans Republican.

Kemp won the primary by over 50 points. Geez. That alone says something about Georgia voters.

A bipartisan survey for the AARP conducted July 5-11 by the GOP firm Fabrizio, Lee & Associates (which was Trump’s 2020 pollster) and Democratic firm Impact Research (which polled for Biden) showed Kemp leading Abrams by 7 points, 52 percent to 45 percent. Notably, those numbers came as in the true Toss Up Senate race, Democratic Sen. Raphael Warnock led Republican former football great Herschel Walker, 50 percent to 47 percent. That’s proof, at least for now, that there is a crossover bloc of Kemp/Warnock voters, unicorns that the Atlanta Journal-Constitution’s Greg Bluestein dove into (though it also says perhaps more about Walker’s weaknesses as a candidate). The polling also shows no lingering antipathy post-primary, with both 95 percent of Republicans and Democrats saying they’d back their party’s nominee. Notably, though, Kemp is winning independent voters by a 14-point margin.

It’s the over 50 percent number that is really the driving force for our ratings change. At this juncture, with an incumbent facing negative ads — and the GOP primary hits Kemp endured too — and still consistently pulling a majority of the vote in the most recent polling is noteworthy. Both Kemp and Abrams are virtually universally known in the state at this juncture. Plus, Kemp’s lead over Abrams has been remarkably steady. In the FiveThirtyEight polling average as of July 20, the governor leads the former state Senate minority leader by an average of 5.5 points. The AARP poll also shows that Kemp’s favorability is above water +5 while Abrams is -4 points with all likely voters. Among independents, Kemp is +7 while Abrams is -11. Additionally, Biden’s approval in the state he narrowly won in 2020 is at only 34 percent — and 31 points net negative. Meanwhile, Trump is nearly even in the state, 49 approve/50 disapprove.

Then Taylor noted the money in the campaigns from an Axios report last week.

Well, $26.2 million of Kemp’s money came from Georgia! Abrams has only got $7 million from Georgia.

$1.5 million of Abrams’s haul “came from Fair Fight, a voting policy group founded by Abrams herself.” 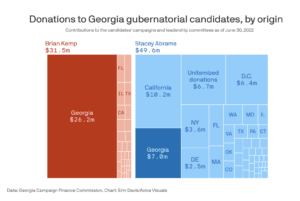 A new poll this week also showed Kemp has a five-point lead over Abrams overall but is also performing well with key groups:

The poll also noted that African-Americans “are not a homogenous voter block for Abrams” and found that a quarter of African Americans aged under 35 supported Kemp, while around 10 percent of African American men over 35 also expressed support for him.

The simple fact is that here in Georgia folks have lived comparatively free lives throughout the last few odd years. Tons of folks from around the country have fled their home states- Places like MI, CA, NY, Penn, NJ. Seems like the extremism of the left has changed hearts an minds.

The simple fact is that here in Georgia folks have lived comparatively free lives throughout the last few odd years. Tons of folks from around the country have fled their home states- Places like MI, CA, NY, Penn, NJ. Seems like recent events have changed hearts an minds.

That’s what I hear.

There’s a pro wrestler named Omos who is 7-3, 400 pounds. Get him to stand beside Kemp and it will lean more in his direction. I think the polling is partially affected by Miss Waffle House’s gravity.

Georgia does not lean Stacy Abrams. Due to Miss Waffle House’s gravity, she must be kept in an upright position at all times. Otherwise she would tip over and go kerplop.

10 4 foot tall 40 pound midgets would be much better attraction. Stack them.

I’m a refugee from the People’s Republic of California who moved to the Free State of Georgia right as ‘rona hit.

I would crawl naked over broken glass to vote against Stacey. Kemp’s not my guy by a long shot, but I would vote for a random felon released from Riker’s island before Stacey.

Honestly, my guess is that Kemp cheated with Dominion voting systems to win in the first place, so he couldn’t fight against the 2020 cheating in Georgia without implicating himself. Someone has the goods on him, and likely had his daughter’s boyfriend killed.

But hey, we got constitutional carry, anti-CRT laws, and we ended our lockdowns in April 2020…so, as bad as anything Kemp did to Trump may be, he’s better than a sharp stick in the eye.

I’m glad you made your decision based on some actual facts. Please tell me you will continue to refrain from make decisions based on guesses.

Oh look, a new left wing marxist kook. The California refugee’s facts are as good as any you have.

Imagine if Stacey Abrams leaned left – or right: she could kill someone.

Campaign donation limits are pointless when you can just start PACs that can be given unlimited amounts of money from one donor.

Nothing lean about that Democrat.

I like to think that even if Stacey were not fat and ugly, that the stupidity that flows from her mouth would keep me hating her!

The raising money part is the entire point. Can’t really blame her for wanting to be rich.

It’s not surprising she’s raised more. After all, Republicans are subject to campaign finance laws.

GA GOP loooooooves to play hurt games. They allowed Ossof and Warnock to take the senate seats because they refused to vote.
Then again, this is likely media spin

“Kemp is leading in polls even though Abrams has raised a lot more money than him.”

Almost like how lower-budget unwoke films are attracting audiences far and above those attending expensive Hollywood scolding sessions.

IMO, Abrams isn’t a winner in GA. If she was running in a d/prog one party State she would be. Similar to VP Harris Shine lacks the retail political skills to attract crossover and independent voters. The d/prog machine in GA will push her towards a ceiling of 45%. Some independent voters will pull the lever for her.

The only way she wins is if a large number of nominal r voters decide to ‘punish’ Kemp for ‘sins’ real and imagined by staying home or simply not voting in the Gov race.

So it boils down to a fight between the lean Republican and the obese Democrat. That was too easy. Sorry.

Stacey Abrams has at–least in Ga–shot herself in the head. She is running all out against constitutional carry and for full NY,/CA style gun control. That will have rural blacks and a lot of urban blacks not vote or vote against her on election day. Her stand on abortion is also hurting her big time with the same groups.

The last two elections in GA have had the people way ahead in the polls lose when the Dominion voting machine totaled up the votes. This coming election is about electing the least objectionable candidate.