No matter how much Biden and his minions sugarcoat it, he is in big trouble in 2024 if he runs. 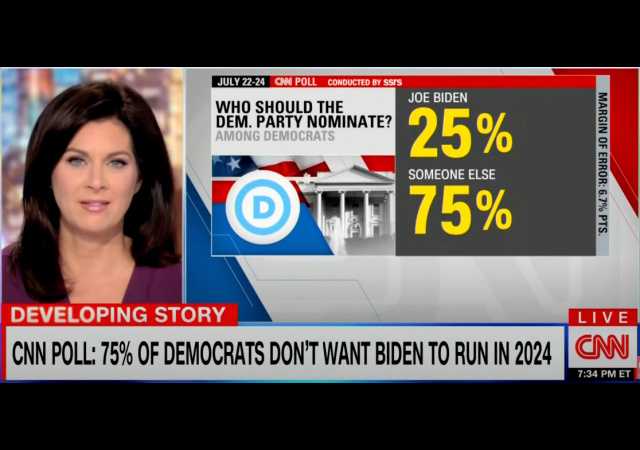 CNN. A CNN poll found that 75% of Democratic and Democratic-leaning voters do not want Biden nominated as the 2024 presidential candidate.

That’s a massive change from the last poll, which lasted from January 10 to February 6. 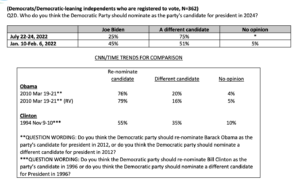 17% of those voters think Biden is too old. 3% want someone with different policy views, more liberal or progressive.

The other options all hit 1% except for other/unsure, which was also at 3% 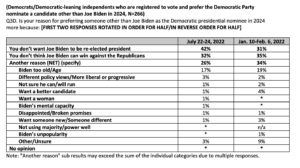 24% don’t think Biden could win against the Republicans.

No matter how much Biden and his minions sugarcoat it, he is in big trouble in 2024 if he runs. More than likely, the Democrats will get their butts whooped in November.

The New York Times poll that asked the same question discovered that 64% of the respondents say they hope the Democratic party nominates another candidate.

The Democrats and Biden make a big deal out of abortion and guns, but the voters want what they always want: work, salary, and food on the table.

45% of them disapprove of the way Biden is handling his job.

But the CNN poll provides more ammunition for the Democrats to pull Biden from 2024. We already know they don’t want Biden as their nominee. Other top Democrats are showing signs of stirring the waters in 2024.

So, about the same as Democrat voters up till about March of 2020. No wait, my bad… Biden never polled that high in 2020 until he was installed as their candidate by 24 others all ending their campaigns when told to.

So, 60 million of the 81 million people who voted for him last time, regret their vote?

It has not yet been proven that computers have feelings so there may not be that much regret.

Geez, the internet winner for the month of July!

How about a poll to find out what percent of Democrat voters voted for Joe in the first place?

The answer is probably a lot less than you would think.

Is it even possible that he received 81,284,000 votes—more than any other candidate in history?.

Little known fact: The number illegals who have crossed the border since Joe became president far exceeds the number of votes he received in the last election.

Total “I have had enough of Trump and want him out of office votes”-81 million-Those very definitely dwarf the number of illegals.

That is why Biden isn’t holding onto Democrat popularity he was never popular in the first place, nobody (including Joe Biden) claims he ever was.

However if you have had contact with Democrats you will know they don’t blame Biden for being too far left, they blame him for not prosecuting enough Republicans, not having Trump arrested, going to easy on Republicans, and of supposedly losing deliberately.

Bernie Sanders voters are (politically speaking) not your friends.

Total “I have had enough of Trump and want him out of office votes”-81 million-Those very definitely dwarf the number of illegals.

No question about that.

Yet Trump still picked up an additional 12 million votes than his first time around, an all-time record for an incumbent president. If you really think the election was honest, you’ve proven you have a single-digit IQ.

Danny is a CCP plant. He’s dishonest, and paid to be so.

Clay & Buck show this AM: DOJ is going to indict both Hunter Biden and Trump. Indictment of Hunter forces a Slow Joe pardon and removes Biden as 2024 candidate–possibly a resignation. The indictment of Trump (sedition) is to say: “see, we treat all sides the same.” The DOJ belief being that an indictment of Trump will remove him as a viable candidate.

The DOJ, being full on Swamp, has no idea how yet another show trial is going to drive the 71M that voted for Trump beyond furious. Divisive doesn’t begin to describe such a move.

Who knows? C&B had an excerpt from some MSM softball interview with Garland. Sure sounds like he was setting it up. Or, at least leaving the door open.

No way they indict Hunter. If Biden resigns, he pardons Hunter on the way out.

It would take some really ballsy wordsmithing for Biden to give blanket absolution for all of Hunter’s federal sins.

Also, he can only pardon past acts, not future ones. So if his crooked family hasn’t ceased their graft by the time of the pardon they are still liable for them.

Finally, he can only pardon federal crimes, the states can still go after his cronies.

Now poll Kamala. Not in a dirty way. Just check her support in the Democrats party.

Statistically impossible to get nearly every registered voter to vote.

1) 75% of Democrats would be happy with Xi Jinping as their candidate.
2) It does not matter what Democrat voters want, because the Party decides who will run.
3) As far as they can arrange it, the Democrats don’t care what the voters want either because vote fraud is their primary tactic.

I think 75% is probably a low number.