WH Climate Czar John Kerry doubles down on climate agenda, says SCOTUS ruling “doesn’t take away our ability to do a whole bunch of things that we need to get done.” 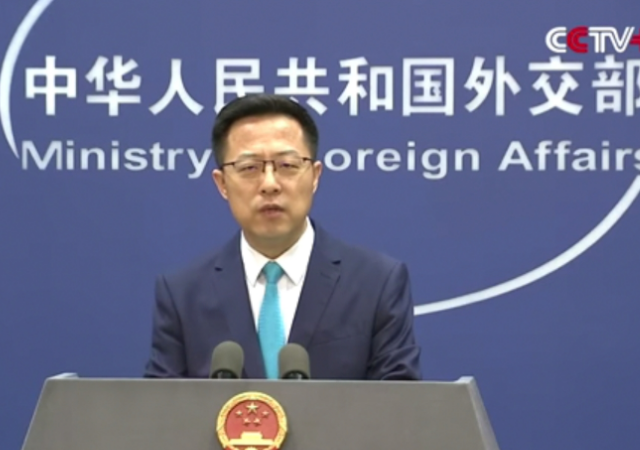 While Beijing makes huge investments in setting up new coal and nuclear power plants, Chinese foreign ministry spokesman Zhao Lijian told the Biden administration and other Western nations to “face up to their historical responsibilities and show greater ambition and action.”

[China’s foreign ministry spokesman] Zhao told reporters at a regular briefing that the ruling had been criticised by the international community, adding that “it is not enough to just shout slogans to tackle climate change”.

“We urge developed countries, including the United States, to… face up to their historical responsibilities and show greater ambition and action,” he added. (…)

Kerry declared Friday that “we’re going to meet our goals … and the president is going to continue to fight for legislation from the Congress,” in the wake of the decision.

“We absolutely are convinced we can meet our goals,” Kerry said.

Biden has pledged to cut the nation’s greenhouse gas emissions in half by the end of the decade and to have an emissions-free power sector by 2035. Despite two Democrats joining with Republicans to block what was supposed to have been transformative legislation moving the United States to cleaner energy, Biden has managed to free significant funding for electric charging stations and some other moves.

“This decision by the Supreme Court … is disappointing, but … it doesn’t take away our ability to do a whole bunch of things that we need to get done,” Kerry said.

The criticism of SCOTUS ruling also came from the United Nations. “Decisions like the one today in the U.S. or any other major emitting economy make it harder to meet the goals of the Paris Agreement,” UN Nations spokesman Stephane Dujarric lamented, referring to the 2015 international climate accord nixed by the Trump administration.

In November 2020, President Trump pulled the U.S. out of the climate accord. The Biden administration rejoined the pact in February 2021, ‘apologizing‘ publicly for Trump’s withdrawal.

The Biden administration has committed itself to the Obama-backed Paris pact despite its disastrous consequences for the U.S. economy and jobs. Honoring the Paris agreement for the next two decades will cost the U.S. “close to $3 trillion in lost GDP and 6.5 million industrial jobs, while households would have $7,000 less income,” the Trump White House estimated.

too bad Biden is a Constitutional president, restrained (in theory) from authoritarian dictates. China and Xi cannot understand that.

Biden cannot understand where that voice speaking in his ear is coming from.

That’s hilarious!
The pot calling the kettle blacker..
It’s already known the CCP bought the Biden’s and now we know why..

I do admire a good sense of humor….

Get back in your own Belt and Road lane, Mao.

Man if only we had a president that would tell China to stop whining and go pound sand.

This isn’t so much for China but the developing world.

Developing world – we want to join the industrial world to better the prospects for our society and our children
Western Nations – don’t chop down forests for fuel, don’t burn coal, Heck don’t even mine coal

DW – how about Nat gas?
WN – don’t use that either

DW – I suppose diesel generators are out of the question?
WN – damn right they are, emissions too high

DW – you guys going to provide us with small scale, safe modern nuke power plants?
WN – about that, see that would give access to uranium or spent fuel rods for a dirty bomb or you guys might build your own bomb, plus …that would be expensive

DW – so what the hell are we supposed to do then?
WN – stay poor, relatively defenseless and continue to be exploited by big, global Corporate interests

“China in 2019 pumped out 27% of climate-eroding fossil fuel fumes, more than the rest of the developed world combined. ” (quoted from AP)

Whether or not China believes in man-made global warming I cannot say, but whether they do or not, one thing is clear—that is not their primary concern.

China’s goal toward which they are working is to become the number one power in the world, both militarily and economically. Everything else is seconary to them.

Ah, the AP’s legendary ninja math skills.
China pumps out 27%. The rest of the developed world pumps out up to 26%,
So who pumps out the remaining 47%?
Ah, I forgot. White nationalists.

Or, the “undeveloped world”, or maybe the underdeveloped. Coal cooking fires and home heating is pretty prevalent throughout the world’s less developed economies.

China can go suck rabbit pellets. Biden cannot unilaterally make massive economic upheavals in our economy via regulations – Congress must enact such massive political and economic changes and be held responsible and accountable for their actions.

“Biden cannot unilaterally make massive economic upheavals in our economy via regulations”. But he can do it via executive order? Killing the Keystone Pipeline, trying to shut down the Permian Basin, putting most federal lands off limits to drilling? This resident doesn’t need regulations, his handlers are doing just fine using the EPA and DOE.

It’s just an act they put on in public. In private they are all lovey dovey.

Chicoms doing everything they can to sow discord in America. With China Joe installed they get maximum effect for their whining.

China has so much dirt of the Biden’s but he is senile and needs to be reminded. He has now been reminded.

Where are all the British spies when you need one? Time for a Hunter Drug-Prostitute, Money-Laundering Poo Dossier.

They don’t do it for free, and Republicans don’t pay enough.

China is planning 43 new coal-fired power plants and 18 new blast furnace projects. if approved and built, they will emit an estimated 150 million tonnes of CO2 a year.

China can take their distraction squirrel complaints and shove them.

I’d tell the Chicoms what they could do with their commands, but an hour later they would need to do it again.

On the other hand they are telling the same folks pushing this climate hoax to pound sand. It’s not quite the ‘enemy of my enemy is my friend’. Viewed from a certain perspective it is amusing on some level.

China, India and some others are very successfully avoiding allowing John Kerry and hypocritical international climate busy bodies to determine their domestic energy policy…. which is more than we can claim right now.

Is it really necessary to point out that a reasonable interpretation of this is just that the Chinese leadership believes it would be in China’s interest if the Biden White House were to push ahead with its climate agenda?

Or that what is in China’s interest is seldom in our interest?

Sure, but their rhetoric needs to be slapped down. We have no more climate related obligation to them than they have to us. And they’ve been burning our coal when we stopped using it ourselves, cute isn’t it? It’s such a good energy source, it’s still useful on their east coast at 2-3x the price of what it would be here, to account for the cost of loading it on a boat and shipping it across the Pacific.

Like ChiComs are following EPA rules. They want us to loose ground on them, and Sundowner will be glad to help them.

That’s hilarious, China. You don’t want us burning our own coal from the Powder River Basin, so it all gets shipped to you, and you can burn it and send the flyash and acid rain back over the US.

Thank God we have a little sanity in our government and stopped enabling that garbage.

I suppose next they’ll lecture us on human rights.

The Chinese are Green, not green, and they laugh at people who indulge green lawns in the breech, including: [catastrophic] [anthropogenic] climate cooling… warming… change prophecy, renewable/intermittent/unreliable environmental and ecological hazards from conception to death. That said, take a knee, beg, suckle your secular lucre.

China needs to stop meddling in US internal affairs.

Hey, they paid for them with much silver. Not unreasonable to expect a return on investment

So China calling in Hunter and Brandon’s markers. Please tell me what country in the last 50yrs has decreased CO2 emissions more than the USA?